The Problem With Progressive Overload

Progressive overload makes sense on paper. It goes like this:

To stimulate the body to adapt (grow) you must overload it by challenging it with a task it's not used to doing. To keep progressing, you must gradually increase the amount of overload imposed on the body.

Typically, that means adding more weight to the bar as you get stronger.

The problem? It can't keep working.

Linear Progression: It works, in most cases, for 8-10 weeks.

Some programs give the illusion of longer-term progress by having you start at a very easy level and working your way up.

Essentially the first 4-6 weeks are so easy that they don't challenge your strength. So you can progress for 16 weeks or so before hitting a wall.

In reality, you didn't progress more, you just took longer to start challenging your body. And such programs often include deloads or easy weeks every fourth week.

So now you can train 20 or even 24 weeks before hitting a wall. But again, when you hit that wall, you'll be at about the same level as you would've been after 8-10 weeks if you had used a more aggressive progressive plan.

Yeah, you trained for 20-24 weeks without hitting a wall, but you didn't get more results in the end.

This is a bit better in that it allows you to progress for longer. For example, let's say you use the 3-5 rep range:

It's not always clean cut like that, but you increase the weight only when you can do all your work sets with the top of the selected rep range (5 reps in this case) with the same weight.

It works, and you'll be able to progress for longer, but not because of some magic loading scheme. It's simply because you're spending more time "milking results" with a given weight.

Progressive overload means gradually making your muscles work harder. Yes, adding weight constitutes an overload, but that's not the only way to create that overload effect.

Our problem is that we tend to qualify progressive overload quantitatively – using numbers, adding more weight, doing more reps. This is more of an external focus than an internal one.

We're focusing too much on the tools that create the effect in the muscles, instead of focusing directly on the muscles.

As long as you make your muscles work harder, you're overloading them. And if you gradually increase how hard they have to work, you're using progressive overload, even if you're not adding weight.

Both the slow progression and the double progression model use this principle – for good reason.

Most people are too eager to add weight to the bar. They believe that it's the only way to get stronger and bigger. Sure, the weight is only a tool to load the muscles which will make them grow via various biochemical responses. But people add weight faster than the body can strengthen itself.

After a few weeks, every session becomes more and more of a burden on the body and nervous system and the stress builds up until you hit the wall.

When people hit that wall they often try even harder to push more weight, which leads to bad form and injuries.

The nervous system adapts rapidly initially, but then the adaptation rate slows. Muscle adapts quickly but tendons are very slow to adapt.

So, initially you can easily progress at every workout because of the rapid CNS adaptations. This lasts for 3 or 4 weeks.

Then muscle adaptations can take over and allow you to continue progressing fairly easily for another three or four weeks. But eventually tendon strength and the tendons' protective mechanisms will become a limiting factor.

And if you only focus on increasing the load, you'll hit the wall because you won't be able to continue adding weight until the tendons are stronger and the protective mechanisms are dulled down.

This is why most linear strength programs that work are 8-10 weeks cycles (sometimes 11 or 12 if they have a deloading/peak week). Lifters often don't realize they can continue making gains without constantly adding weight to the bar.

Finding ways to progress without adding weight will allow the tendons to adapt along with the rest of the body. Getting very good at a certain weight will downgrade the protective mechanisms.

The fixed-weight system is a way to make the same weight more challenging.

Get to a point where you've done everything possible to make a weight feel "hard." Then once it feels easy, that's when you add weight. That's the only option you'll have left to challenge your body.

Because for natural, non-genetically gifted lifters, that's the best way to progress for a long time and avoid the frustration of stagnation.

You'll build more muscle, your tendons will get stronger and better prepared to handle bigger and bigger weights, your nervous system will stay fresh, and your lifting technique will improve.

Gains made quickly aren't stable and can be lost very easily. And that's very frustrating. Those who make the biggest changes in their physiques are those who stick around the longest!

Staying motivated and driven is one of the most important things you can do. Nothing kills motivation more than stagnation and regression. This program protects you against those.

Your progression with this approach will be sustainable for longer than any other progressive overload system.

Use the same training weight for your movements, but change the conditions under which you do each rep.

At the end of four weeks you increase the weight and start a new block.

A 12-week cycle (three, four-week blocks) will give you a strength increase of 10 or even 15% on your big lifts.

More importantly, if you decide to keep using this block progressing for one, two, or three more blocks you'll keep progressing at a similar pace.

This progression model is used for the big lifts. Every week you'll keep the same big movements and use the same weight, but how you perform the reps will change from week to week.

In an ideal world, you'll keep the same number of reps per set, but don't panic if you do one or even two less.

In the first week of a training block, do your reps with the same style you normally use. This should mean lowering the weight under control, but not slowly (about a 2 second eccentric) and lifting the weight aggressively, pushing it as hard as you can.

In the second week you'll keep pushing the weight aggressively, but lower the weight slowly. Shoot for about 5 seconds on the way down.

Don't count seconds; it kills your focus. Think about lifting and lowering the weight, not counting numbers. Just make the rhythm on the way down about twice as slow as it would be during a normal rep.

Take three, 2-second pauses during the lowering portion of the lift. The first one in the upper third of the range of motion, the second at the mid-point, and the third in the bottom of the rep.

During those pauses, keep the body tight and contracted. Focus on maintaining perfect body position. After the bottom pause, try to lift the weight as aggressively as possible.

Take three pauses again. Take them at the same angles as during week three.

The difference is, you'll take the pauses during the concentric (lifting) portion of the movement. Once again, focus on maintaining perfect body position and keep the body tight at all times.

The starting weight for the first cycle should be 75% and the rep number 5. It's possible that on some weeks you get only 3 or 4 reps per set. That's fine, but really work hard to get those 5 without sacrificing form.

Do four "big lifts" in this training cycle. On each day you do two lifts. You'll train six days a week, ideally. So each big lift is hit three times a week.

Do three work sets for each, and one to three warm-up sets (progressively heavier). As mentioned, shoot for 5 reps per set.

These are the main movements you'll do for the four-week block.

Do two more exercises in each workout, targeting neglected or weak areas. Do these for higher reps, three sets of 6-10 reps. Do not use a specific progression model for them, just make sure to get a good contraction and muscle fatigue.

The main lifts (the first two) never change. But you can use any exercise in place of the other ones to hit your weakest links. You can also use different assistance exercises on your three workouts for the same main lifts during the week.

At the end of a four-week cycle add 5% to the bar and start a new four-week cycle. For maximum results, do at least three cycles. Progress will be constant for up to 5-6 cycles.

Strength gains come fast when you're a newbie. Here's how to keep building brutal strength as an advanced bad-ass.
Powerlifting & Strength, Training
Mike Robertson February 18
"The sheer effectiveness and brutality of the EDT program does not come across in the written word. This is a TOTAL gym experience"
Bodybuilding, Training
Charles Staley March 22 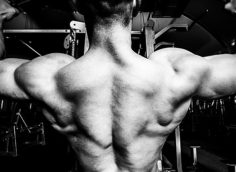