One Exercise To Rule Them All

If I were forced to choose only one exercise to do for the rest of my life that would provide the greatest strength and muscle-building benefits, my answer would be the trap bar deadlift.

It's a perfect squat/deadlift hybrid that's easier on the knees than squatting and easier on the lower back than conventional deadlifts. This makes it a great choice for getting strong and building muscle over your entire body.

It's long been a staple in my training. And it's usually how I start off my week because I think it's wise to put the exercises that yield the greatest benefits early in the week so you can do them when you're fresh.

Plus, nothing screams, "I'm going to make this week my bitch" like crushing some deadlifts on Monday. The following program, however, evolved almost by accident, which seems to be how I get a lot of my ideas.

My knees had been acting up, especially with heavy squatting and heavy single-leg work. I stupidly tried to work through it for a while before smartening up and taking a break from all squatting and heavy single-leg work. To continue to work my quads without pissing off my knees, I modified my trap bar deadlift form so that it was more of a squat than a deadlift by dropping my hips lower and keeping my torso more upright.

I had to lower the weight at first from what I could normally trap bar deadlift with a higher hip position, but I found it worked the legs better and felt better on my lower back, which was a welcome tradeoff. Plus, once I adjusted to the new form, my weights climbed right back up.

Still, I found that as the weights started to increase, my joints starting revolting. I had a goal to pull 600 pounds, but I was junk for three weeks after I hit it. Some people are lucky and can follow progressive overload their entire lifting career without breaking down. Others – like myself – reach a strength threshold where their body can no longer tolerate getting under heavy weights week in and week out, even when using good form.

That strength threshold varies from person to person, but once you find yourself starting to break down from heavier weights, it becomes prudent to find other modes of progression beyond just adding weight to the bar.

If you've stalled out on your current lower body routine and are looking for something to kick start new muscle growth, the following program will be right up your alley. Don't think that this program will be easy because you're not going as heavy; it's anything but easy. In fact, it just may be one of the most challenging programs you've ever tried.

While this workout is considered a lower body workout, you'll notice substantial growth in your back, traps, and forearms as well.

Interestingly, when I first started training this way, I started getting a lot of comments that my upper body looked bigger even though I was doing very little upper body training at the time.

At the end of the 10 weeks you can either move on to a different lower body routine or continue training in this fashion.

Once you're at 10 sets of 10 though, stay with 10x10 and work on increasing the weight while still completing all 100 reps rather than continuing to increase the reps. Small jumps in weight really add up over the course of 100 reps, so don't over get overzealous.

The Bent-Over Barbell Row is a great exercise, but hardly anybody does it correctly. Most people look like they're having relations with a small farm animal when they do BB rows. Hence the Incline Bench Dumbbell Row.
Training
T Nation August 3 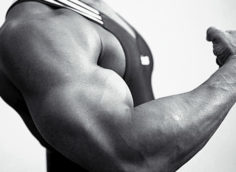 Even if you didn't inherit the best genetics for big arms, this superset will make a visual impact.
Arms, Bodybuilding, Tips, Training
Calvin Huynh January 2

Take your core strength to the next level with this movement.
Abs, Exercise Coaching, Tips
Drew Murphy September 20