What’s the best way to pack on pounds of lean mass? Heavy loads with long rest periods? High volume with short rest periods? A combination of the two, with a sprinkle of P-90X thrown in for flavor?

Though either approach can certainly “work,” you don’t have to look further than the nearest gymnastic training center to see that there are other effective ways to pack on appreciable muscle mass. Considering gymnasts often have some of the thickest arms and shoulders per pound of body mass of any athlete, it’s surprising you don’t see more gym rats hitting the rings or pommel horse.

And let’s not forget sprinters. Many 100m and 200m sprinters like Harry Aikines-Aryeetey from the UK have more beef on their arms, shoulders, and thighs than many gym rats could ever dream of building. On top of that, their muscles tend to have a “denser” look, possibly due to a higher concentration of contractile proteins than that of bodybuilders, where increased cell volume and intramuscular glycogen play a big role (sarcoplasmic hypertrophy).

I recall watching training footage of disgraced Canadian sprinter Ben Johnson before his performance enhancement drug scandal. For one particular workout, Johnson brought a squat rack onto the track and performed an extremely heavy set of back squats (I think he had over 500 pounds) for 3-5 reps, then immediately burst from the cage in a full speed sprint for 60m.

The reasoning behind this was to overload the nervous system in a sort of “pre-fatigue” manner with the back squats, and then have to generate power through the already tired legs to achieve top velocity.

To put it differently, he was working the fast-twitch fibers with high-force, low-speed contractions in the back squat, and then immediately hitting them with high-force, high-speed contractions in sprinting. It was two mechanically different activities requiring a high degree of neural activity to produce maximal force in a sort of bipolar manner.

This was interesting as much of the prevailing wisdom at the time regarding hypertrophy revolved around simply lifting heavier weights within an 8-12 rep range. As you got stronger you either lifted more weight or did another rep with the same weight in the subsequent workouts.

The idea of resistance and speed of contraction being inversely related didn’t take into account the muscle force production capacity, and the associated muscle activity to get it there. 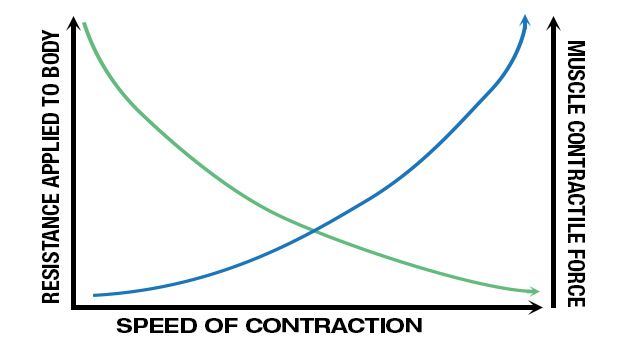 This is why many athletes can generate huge muscle force components with relatively light resistance (baseball, punching, golf, etc.). If we were to crank up the resistance without significantly affecting the top-end movement speed, we’d see some explosive gains in size and strength.

So I started experimenting. I couldn’t take a squat rack onto the field, but I was able to position a squat rack and a cycle ergometer right next to each other. I’d set up the rack for a heavy set and then hop on the bike for a 6-second bout of very high speed sprint work that left my legs feeling like Jell-O.

After two months, both my squat weight and sprint speed were up significantly, along with noticeable growth in my quads and hamstrings. My acceleration and top speed in all the sports I was participating in was up, too.

I tried this workout again a decade later – being outside the fantastic adaptable teenage hormonal years – with similar results. I then tried it on a few of my “hard-gainer” clients, and found that with only two workouts a week in this scheme, both saw solid gains in size and strength.

One client gained 10 pounds of muscle in two months (going from 156 at 5’8″ to 166) without changing his diet, and after training hard for over a year. Another gained 14 pounds after already training for two years, but found that his diet definitely changed because he was eating almost anything that wasn’t nailed down.

By making the muscle contract in a high force/low speed and high force/high speed series, the body is put under a very high-intensity training stimulus, which provides three major benefits.

First, it extends the force production phase of the exercise beyond the 3-5 reps of the heavy squat and incorporates a cyclic natured movement that requires a high degree of muscle force production.

The increased time under tension of roughly 10 seconds of maximal power output will completely tax the creatine phosphate system and the neural systems’ ability to generate an impulse into the muscle for an extended period. The end result is a greater response from the endocrine system and muscle satellite cells to put everything back together, and a greater development and repair of muscle fibers.

Second, fast twitch muscle fibers, the ones that can grow to be the biggest within the body, are stimulated by both high force production and high speed production. By using a system that addresses both of these components, we’re getting the best variety of stimulation to the fast twitch fibers, as well as the highest intensity stimulation possible short of hooking our muscles up to a generator and redlining the sucker.

Third, although not a component of the exercise itself, the rest period is kept to just 90 seconds between bouts, allowing for an adequate recovery of strength and contractile energy sources while putting the body in the most advantageous position to pump out growth hormone and Testosterone.

Most powerlifting or high strength development workouts require the user to rest between sets for between 2-5 minutes, whereas keeping the rest periods short helps to continue the taxation of the growth hormone and Testosterone response within the body. What this means is that the maximal amount of weight lifted in a session is going to be slightly less as the sets wear on, so adjust the weights down as needed. 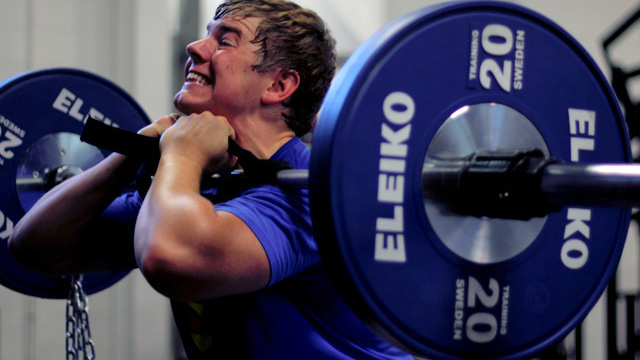 This program is meant to be used as a two-day-per-week substitution to an existing strength program for someone who has at least a year of good solid training under their belt. Make sure you have the finer points of lifting down for the specific lifts given, and that you have an understanding of the physical requirements for top speed sprint work. For those willing to give it a try, get ready to hate life for a few hours each day.

These workouts are insanely intense, but considering the goal is to increase peak strength, peak velocity, and build muscle, you need to create a systemic strain on the muscular system that evokes the largest response in growth hormone and Testosterone.

Alternate these two days once each per week with at least two days in between. For instance, workout one would be on Monday, and workout two either on Thursday or Friday. This will give your nervous system a chance to recover before going into the next workout.

Once the first month (four times through each workout) is in the books, add 2-5% to each lift you’re performing for the second month. For instance, on day one, set 3 of back squats will move from 90% 1RM to 92% 1RM. For the theoretical lifter who maxes out at 315 pounds, this means the weight they will move from 285 up to 290 pounds. A 5% increase would mean going from 285 to 300 pounds.

This systematic increase in resistance is necessary to keep the relative intensity high throughout the workouts. Do not perform heavy squats on any other day of the week, although after the second week you may not be able to even walk, let alone squat on the alternate days.

What this workout program lacks in variety must be made up for in raw aggression. As T NATION contributor Tony Gentilcore says, you have to intimidate the weights when doing this program. Yell, scream, kick, and claw to get every rep out, and put every ounce of your being into every second of the sprint work. Since the rest intervals are only 90 seconds long, you won’t have full recovery before beginning the next set, so it will definitely be a mental test to get through these workouts. That said, the end result should more than make up for going through hell and back.