Whenever an athlete shows up at my training facility looking like he has spent the better part of the off-season camped in front of Krispy Kreme Donuts, I immediately put him on a program that incorporates short rest intervals.

Short rest intervals lead to an increased production of lactate, and an increase in lactate leads to dramatic increases in Growth Hormone, thus resulting in very significant losses of body fat.

This method is called the "German Body Composition" program, or GBC for short.

While many people in the field–TC included–have professed skepticism that the exercise induced GH release was sufficient enough to cause significant fat burning, my personal experience with scores of athletes confirms the effect.

Consider that the typical amount of GH that professional bodybuilders inject each day is actually a smaller amount than that released by the pituitary during lactate training! In fact, if the program is done correctly, GH production is 9 times normal–enough to make an army of dwarves grow tall.

While the original GBC program proved to be very popular for lay people and the average athlete, I often use an advanced version of GBC for elite athletes and super conditioned amateurs.

Not only does Advanced GBC lead to dramatic fat loss, but it is also quite effective in growing muscle and developing muscular endurance.

At first glance, the program seems easy, perhaps ridiculously so, but if done properly, it is anything but easy. When I first presented a version of it to the National Judo Team, they laughed.

I simply challenged them to do 3 circuits of the following:

Despite their confidence, they only completed one circuit and promptly turned green.

The first time I tried it with Marty LaPointe from the Detroit Red Wings, we practically had to put him on the plane in a wheel chair.

The secret to making it effective, though, is choosing the correct resistance. In the version of advanced GBC training I am about to present, you must choose weights that accurately reflect your 6RM of an exercise, your 12RM, and your 25RM.

In other words, you must pick an exercise that will crush your spleen after 6 reps, after 12 reps, and after 25 reps. You should have one eye pop out of its socket upon completion of the last rep, whether it is 6 reps, 12 reps, or 25 reps.

You will perform 2 exercises each training session using the following split:

The cycle is meant to be performed 6 times. Doing it longer will result in diminishing returns.

Here are some suggested movements, along with the prescribed rest periods.

As a reader of Testosterone Nation, I am going to assume you are familiar with rudimentary rules of proper eating. However, I would like to stress a few points that you might not have routinely considered.

First of all, keep in mind that approximately 75% of the American population simply does not do well with carbs. As such, try to eat carbohydrate foods that score below 50 on the glycemic index. The obvious exception to this is post workout, when it is recommended that you do eat high GI carbs, along with protein.

Secondly, simply eat more vegetables–lots more vegetables. That simple trick alone will help you burn fat. You might also consider gorging on the cruciferous vegetables like broccoli, cauliflower, and cabbage, as there seems to be an epidemic of "man boobs" in America. These vegetables are strongly anti-estrogenic, and including them in your diet could go a long way in eliminating this unsightly and decidedly embarrassing problem.

You don't have to be a pre-diet Jarrod from Subway to undertake this program, but if you decide to try it, you'll be very pleased with your newly found definition and newly found size and endurance.

Here are three ways to do this exercise that'll build your back, make your shoulders feel good, and even boost your bench press.
Tips, Training
Christian Thibaudeau February 25 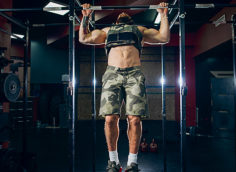 If you can crank out dozens of them, it's time to use this training method to keep the gains coming.
Training
Christian Thibaudeau April 23

This is a great chest-building exercise, but also a good test of stability and strength... if you do them right. Here's how.
Exercise Coaching, Tips
Drew Murphy February 21