I’m absolutely thrilled to be writing this article. The fact is I’ve been waiting a very long time to write it.

Before I continue, let me be very clear that as a powerlifter, a 400-pound bench isn’t one for the record books. According to my own lifter classification system, it isn’t even a Master level lift, let alone an Elite one.

Furthermore, I placed sixth at my competition – not even worthy of a medal.

However, I’m still very proud of that lift. I’m proud because to reach that level of strength – for me – was hard.

But the aim of this article isn’t to brag about something I did, but to share with you how I did it – so you can hopefully do the same.

What follows is my exact training routine that I used to hit my goal. 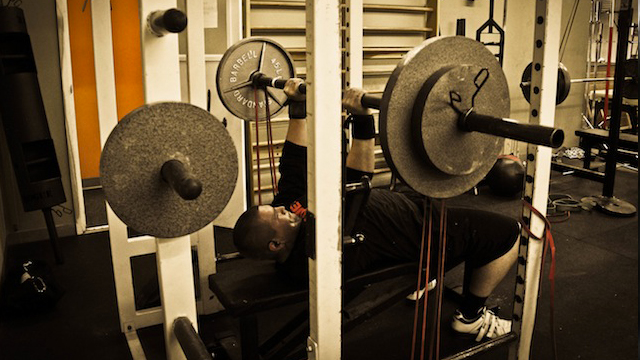 Listed below are my best competition bench presses by year, including bodyweight, for the last seven years. I’d lifted in many meets before that but was wearing the old bench shirts from the 90’s (Inzer single-ply), which made it difficult to draw comparisons with my raw bench press.

However, even in a shirt I was never able to get my bench over 400 pounds.

I know what you’re thinking. That’s one hell of a plateau. I should mention that this training rut was not through lack of effort. It’s an unusual year if I don’t train pretty hard at least 48 weeks out of the year, often more than that.

Still, my best-laid plans simply weren’t working. Something needed to change, and what finally worked for me was a threefold approach:

My best competition bench at the start of the program was 386 pounds, but in all honesty I couldn’t bench that at the beginning of this plan.

I would guess that my max at the time was about 370, no more than 375, so I had my work cut out for me, but first I had to determine how long the prep would be.

The last time I’d followed this routine I did it for 10 weeks. That felt a little too long, so I decided to follow this program for six weeks, plus one pre-competition week. I wanted to err on the side of being fresh versus too fatigued and/or dealing with a nagging injury.

I started every upper body day the same way. I’d perform the following stretches (see video below) in this exact order. This would take no more than 10 minutes in total to complete.

I paused on every rep on the bench press and the board press, every workout. I didn’t miss one scheduled rep during the entire program, which is something I’m pleased with.

While performing this workout I also followed an intense barbell-curling program (although not super high volume) as I was competing in a strict curl competition as well. On Tuesdays, I’d also do an easy leg day.

I didn’t perform any regular cardio or conditioning during this phase – which isn’t ideal for the long term – but the focus for these 7 weeks was to accomplish the goal of benching 400.

Here’s the program, which some might recognize from the 8 Weeks to a Super Bench article I wrote with Coach Thibaudeau.

I’ve included every rep and weight, with warm-ups in gray.

This is a brutal bench program – after the first week or so you feel pretty banged up – but then you get used to it. And the more you run this program, the most used to it you get. 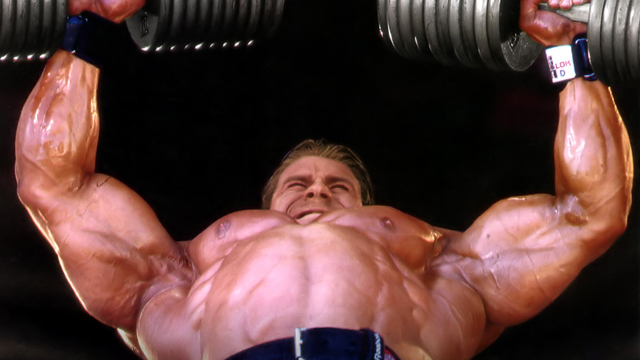 Peri-nutrition played a big part in getting me through the workouts. I would take 2 scoops of Plazma™ and I’m convinced it helped me finally bust my plateau.

Taking fish oil, particularly during the last several weeks, helped prevent some of the nagging elbow and shoulder issues you get when you bench heavy regularly.

My last heavy workout was the Friday workout of week 6. I lifted twice the week of the competition, on Monday and Wednesday. Those days went as follows:

Thursday we flew to Vegas. Friday I coached a teammate that was doing the full meet, and on Saturday the focus was on making weight. Sunday it was go time – I lifted while coaching my teammates (as a team we made 33 out of 38 attempts, including setting two Open Federation records, another thing I’m proud of).

I brought my own bands with me so I could perform the same upper body warm-up as described above, including the military press plus shrug. I also iced my stomach as suggested in the original article for two minutes after my last warm-up attempt.

I know my bench isn’t great – I’d say it’s my weakest competitive lift. But I’m proud of the fact that I didn’t throw in the towel, even though I was stuck in a rut for several years. I’m also proud that I was open-minded enough to try some different approaches.

Because no matter how brilliant or idiotic the theory, no matter how eloquent or simplistic the rationale, the platform is the great equalizer – and there’s no way to bullshit results. The weight either goes up or it doesn’t. How you’re going to get it up is up to you.