You’ve probably heard of the Colorado Experiment where Casey Viator gained about 63 pounds of muscle in just 28 days. That equals an increase of 2.26 pounds of muscle per day. Of course, this feat was accomplished by a world class bodybuilder who was recovering from an injury. He did nothing but eat and train for four weeks straight.

But what about the rest of us? The ones who don’t have spectacular genetics and possibly “other” help?

Sure, a new lifter can lose fat and build muscle at the same time. If you’re a beginner, almost anything will work. But if you’ve been training a while, changing your body composition is harder. You might do bulking and shredding cycles. Or you might be one of those who say, “You can either build or cut, not both!”

I’ve always believed otherwise. When people would tell me their goal was to eat everything, get huge, and then lean down later, I’d always tell them there was a better strategy. And I decided to prove it.

To test this belief – that an experienced lifter could gain muscle and get leaner at the same time – I knew I’d have to get smart with my training and supplementation. The goal? To put on as much muscle and lose as much fat as possible in just four weeks.

I knew it wouldn’t lead to a huge change in weight, but if my beliefs were correct, I could expect to put on some serious muscle and lose some flab in the process.

To get an accurate look at the results, I got a pre and post-program DEXA scan, the gold standard of body composition tests. It takes into account lean tissue, fat tissue, and even bone mineral content. It’s more accurate than a bod pod or hydrostatic weighing. Depressingly enough, the body fat percentage reads 3-4% higher on a DEXA scan than on these other tests. The truth hurts. 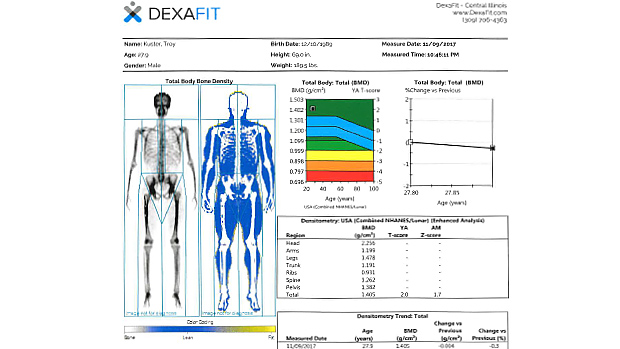 The DEXA scan results said that I weighed 188.8 pounds, had 23.9 pounds of fat, and 157.3 pounds of lean tissue. This put me at 12.7% body fat which left me feeling tubby. But I knew there was progress to be made in both the gains and fat loss department.

After completing the supplementation and training program, I weighed 190.8 pounds, had 19.0 pounds of body fat, and 164.4 pounds of lean tissue. My body fat percentage dropped to 9.9%. This means I lost 4.9 pounds of fat and gained 7.1 pounds of muscle in four weeks.

So, I lost fat and built muscle at the same time. There, it can be done.

This didn’t make for a dramatic scale difference (2 pounds of bodyweight gained), but that’s why the DEXA results are important. When you lose fat and build muscle simultaneously, the scale may not change much, but gaining 7 pounds of muscle while losing about 5 pounds of fat is pretty significant in that timeframe.

Since I was already is good shape, the before and after photos don’t look like your typical “total body transformation” but I’m certainly happy with the results. All photos were taken flexed with no lighting or Photoshop shenanigans. 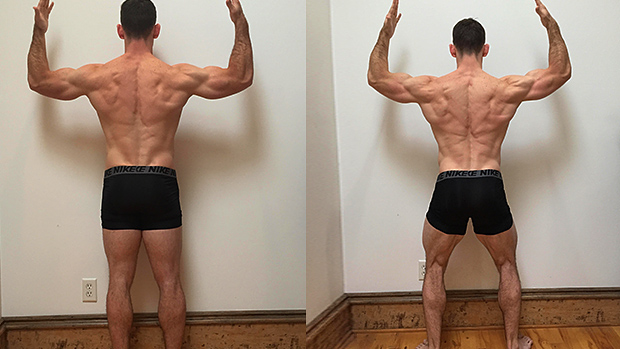 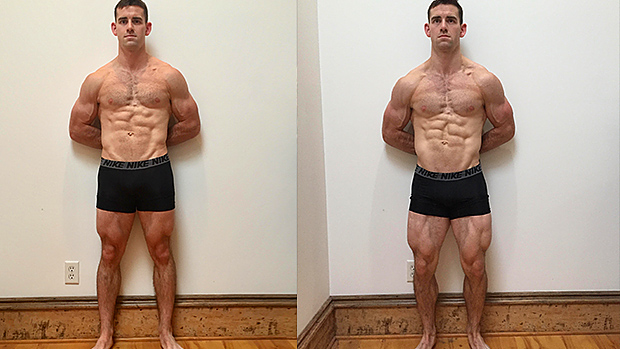 Most research says that the average natural beginner can put on about two pounds of muscle in a month. I’ve been lifting for almost a decade now and would fall into the advanced category, which means it’s much harder to put on muscle. And many people will say that you can’t lose fat while doing so.

After doing my four week program, I’m now very happy to announce that these people are full of crap. Gaining muscle and losing fat is possible to do, assuming you’re controlling your nutrition, supplementing appropriately, and training for these specific results.

My supplement choices allowed me to train far longer and harder than I normally could have. I was able to recover faster, fuel the body’s muscle-building mechanisms, and partition nutrients toward muscle gain instead of fat storage.

Plazma™ is by far the best workout nutrition supplement I’ve ever taken. I felt like I could never overtrain because it helped so much with recovery. This kept me going through some serious volume training.

After each workout I would consume 600 ml of Mag-10® to begin muscle regeneration. I really beat myself up with this training program, and this was the only way I was able to recover for the next bout. Mag-10 is incredibly smooth and tastes good. I’m somewhat sensitive to most proteins and this one did not cause me any GI distress.

Taking 6 capsules of Indigo-3G® before each workout greatly helped to manage my insulin response and helped me use carbs to build muscle. Do you like carbs, but feel bloated and shitty after eating them? If so, Indigo-3G is going to be your best friend. It helps control insulin so that the food you eat can go straight to your muscle.

When doing a hypertrophy-style training program, taking 6 capsules of Micro-PA® before each workout will go a long way towards helping you meet your goal faster.

To conveniently get quality carbs and proteins, I kept Finibars® and Metabolic Drive® on hand.

Before I began my four weeks of pushing and pulling hypertrophy hell, I was doing whole-body strength movements 4-5 times per week and some form of metabolic conditioning 2-3 times per week.

I was in good shape, but I knew if I lifted more often, used a higher rep range, supersetted my lifts, and did some low intensity cardio, I could gain muscle and lose fat simultaneously. Plus I’d have the added bonus of affirming my argument. Since I can be an argumentative douchebag sometimes, this was pretty damn important to me.

I’ve never been a fan of the “strict” program. I like to think in terms of energy systems and movement patterns rather than needing to hit a specific lift at a specific weight.

The most important parts of this program are high effort and high volume. No half-assing any set. In fact, after each superset you should feel like dropping to your knees. Each workout should take around two hours. If it takes longer, you’re resting too long and too often.

Each workout will begin with a lower body superset. Your legs contain the largest and most powerful muscles in your body so it’s important to work them first. This will also have the added bonus of releasing more testosterone and growth hormone during the early portion of your workout.

Next on the list are two push or pull movements to make sure you’re hitting horizontal and vertical movement patterns.

Your fifth and final superset will be your small muscle isolation movements. You’ll blast your triceps, anterior, and middle delts on your push days and hit your biceps and posterior delts on your pull days.

In order to burn some extra fat at the end of your workout, you should tack on some low intensity cardio. This will ensure that you’re burning fat and not carbohydrates which you’ll need to replenish muscle glycogen. You should do low intensity cardio no longer than 20 minutes.

Make sure you’re eating lots of lean protein and good carbs. You’ll need to eat a lot to sustain the amount of volume you do on this program. Here’s an example of my nutrition for a typical day. Servings are in parentheses, i.e. (2):

Yes, this is a lot of work. And while this is a “study of one” it does prove to me that simultaneous muscle gain and fat loss is possible for experienced, regular-guy lifters. It just takes smart training, a good diet, quality supplementation, and focused effort.