The back – the most spectacular, yet often neglected body part.

Okay, neglected might not be the right word, as people don't usually forget to train it like they do those two bamboo shoots they walked into the gym on.

However, a vast majority really have problems stimulating their back to grow on par with the rest of their upper body musculature. This is, in part, why someone with a wide, detailed, and thick back stands out from the lot.

Well, that and the fact that a well-built back is a wonderfully complex piece of human art!

Going Through the Back Issues

So, why do so many people have trouble making their back a strong point?

1. Inefficient mind-muscle connection due to a lack of visual support

In an ideal world, we'd never need visual cues to develop our mind-muscle connection; our body's perception would be sufficient. Sadly, we live in an overly visual society, so we often rely heavily on visual cues to improve other capacities.

Contrary to other upper body muscles, we really can't see our back working as we're training it. For those who are visually dominant, this will cause a big problem during pulling exercises.

This is compounded even more by the fact that what you're actually seeing in action are the main supporting muscles (biceps, forearms, and brachialis), thus reinforcing their role as prime movers rather than supporting actors.

As a result, you shift more of the workload to the arm flexors, making it harder to fully stimulate the back.

Learning to activate and optimally contract a muscle isn't any different than acquiring other motor skills (like learning a golf swing). And the main rule of learning is that the more often you practice a skill, the quicker you become efficient at it.

Where am I going with this? Well, a lot of people get their start by exclusively training the illustrious mirror muscles. This leads to the chest, shoulders, and arms getting all of the love, while the back, if it's lucky, gets the equivalent of a passing head nod at the end of a workout.

This can go on for months, and even years, until that poor soul learns about proper training.

However, by that time it's often too late: The back is lagging behind every other upper body muscle, and your capacity to properly use it is months, or years, behind.

If you have problems recruiting and contracting the back muscles because of a neglected motor pattern or overcompensating arm flexors, doing more and more regular pulling work will rarely solve the problem.

Why? Because you've learned to use muscles other than your back to complete pulling movements, and as such, doing more pulling work will only put additional stimulation on your arms. The result is that your arm flexors will improve even faster than your back, and your situation becomes more difficult still!

While you shouldn't drop pulling work altogether (after all, you need to learn to use your back in pulling movements), you'll need to include some non-pulling exercises to learn to use that back.

I see this one a lot, especially in those who steal your plates in an effort to impress the treadmill treats. By trying to out-lift themselves, they'll:

A) Use a lower back swing to create momentum to allow for the use of heavier weights. The problem with this cheating technique is that you learn to recruit the lower, not the upper, back muscles to initiate the pulling exercise.

This is bad because some recent information suggests that a forceful muscle contraction from a stretched position is one of the best growth stimuli.

In pulling exercises, the stretched position is at the start of the exercise. If you use the lower back instead of the upper back during that initial portion, you're losing a powerful growth stimulus.

B) Perform an "arm pull" instead of pulling with their back. They are indeed pulling the weight through the full range of motion, and if you look at them from the side, they look like they're at least working somewhat decently.

However, if you look at them from the back, nothing happens! There's no contraction and about as much movement as a coma patient. How can you stimulate your back to grow if you aren't even getting it in the movement?

C) Shorten the range of motion in order to move more weight. This either happens at the beginning of the pulling movement (they don't reach the full stretch position) or at the completion of it (they don't reach peak contraction). These are the two most important portions of the concentric action. Miss one of them and you're shortchanging yourself.

How to Bring Your Back to the Forefront

As you can see, fixing a lagging back can be quite a chore!

Here are some strategies to ease your frustration:

• Before stimulating it, you must learn to use it! So, work your back often until you're efficient at contracting it. However, we can't work a muscle often and with a high volume of work. Therefore, when trying to fix an activation problem, you should train your back often (three to five times per week), but at a super-low volume (three to six sets per session). It's also not a good time to focus on heavy lifting, as you naturally compensate for a lagging muscle more so when the external load is high.

• Try to rely more on exercises or techniques that force or teach you to properly contract the back. Three good options are the use of movements where arm flexor involvement is minimized, the inclusion of an isometric action at the peak contraction of a pulling exercise, and the use of enhanced feedback, as in supersetting a back movement where the arm flexors aren't involved with a pulling exercise. The non-arm movement will pre-fatigue the back, and as a result, you'll feel it more during the pulling exercise, thus facilitating the development of the mind-muscle connection.

• When doing pulling movements, always think "stretch and squeeze." The muscle that's being stretched the most tends to be the one that's recruited the most, and you can recruit up to 10% more muscle fibers during an isometric contraction. That tells me that if you have problems recruiting the back during pulling exercises, stretch the back at the start of the movement and squeeze it hard for one to two seconds at the fully contracted position of each rep.

The Beast's Lagging Back Program

So, if you've misplaced your back along with your car keys and virginity, here's the program for you:

Hold yourself at the top of a completed pull-up for as long as you can by really focusing on squeezing your back, not your arms. When you can't hold yourself up, lower yourself back down as slowly as possible, still focusing on your back.

Shoot for a hold of around 20 seconds. Once you reach that duration while using mostly your back, strap some weight on your waist.

* Note that the rest intervals are long for this first exercise to maximize motor learning, which is hampered by fatigue.

With your knees on a decline bench, start like you would for a one-arm dumbbell row, but instead of pulling straight up, bring the dumbbell toward your hip in an arc motion. The elbow should be slightly bent to avoid the overuse of the arm flexors.

The decline angle will favor a better peak contraction by keeping the tension on the lat even at the end of the concentric portion.

If you aren't stable enough when putting both knees on the bench, you can put one foot down on the floor, but make sure that your hips are higher up than your head.

This is like a regular one-arm dumbbell row, but the decline favors a greater back activation.

Even though the back will be fatigued from the arc row (which is the goal of enhanced feedback), you'll still be able to use more weight for B2 than for B1.

For this movement, hold the peak contraction (remember, focus on that back) for a certain period of time on each rep. To adjust to the fatigue level, the duration of the hold is decreased with each rep.

Follow the same rep technique as above, and attempt to touch your rib with your elbows at the peak contraction position.

Option A: Do this workout as your regular back workout and perform three sets of only one back exercise two to three other times per week.

Option B: Split the workout into three mini-sessions:

Session 1: Exercise A
Session 2: Superset B1 and B2
Session 3: Exercises C and D

I personally prefer the second option, but most will favor the first one. Stimulus seekers like to feel their muscles being pumped and beat to hell, and they can only get that if they include a full workout for a muscle group.

Four Final Reasons to Give a Damn

Really, the back should be the cornerstone of your physique, considering that:

1. Most of the time, the winner of the top bodybuilding show in the world, the Olympia, is the one with the most complete back. 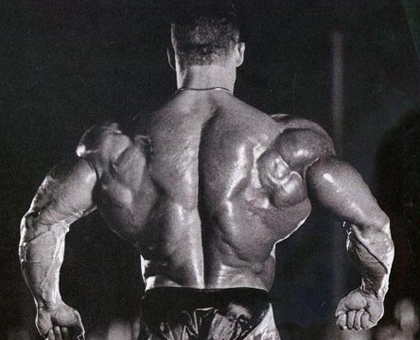 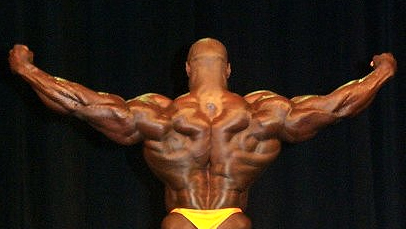 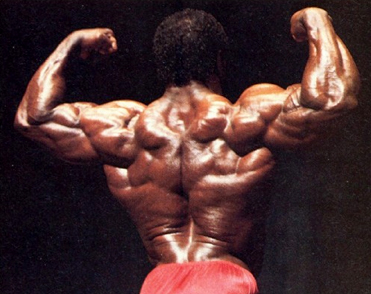 2. Not into bodybuilding? Strength is the name of your game? Well, Louie Simmons once said that you can recognize a strongman by the muscles behind his body.

3. Having an iron-strong back is one of the best ways to prevent shoulder injuries.

4. Lastly, a big ol' back will make you look powerful from all angles (especially from where that hot piece of treadmill ass is at). 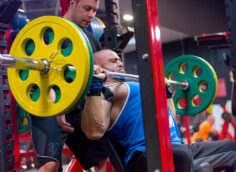 Build explosive power by combining a lift for strength with an explosive exercise. Great for athleticism and gains. Here's how to do it.
Athletic Performance, Powerlifting & Strength
Brandon Holder December 19

The epic roundtable concludes with a discussion of nutrition, supplementation, and recovery, along with some final thoughts and musings by Clay Hyght on why "girls like guys who take them for granted."
Training
T Nation February 27

Here's a "new" way to blow up your legs, especially those puny quads of yours.
Tips, Training
Dan Blewett October 10