Most of the people reading this article have seen charts or looked at
websites that predict how much weight they can lift. For example, the
chart might say that if you can lift 200 pounds for 8 reps, then you
should be able to do 250 pounds for one rep. These types of tools are
useful, but they’re also limited in practicality, because they aren’t
customized to the individual using them. They’re okay for generalizations,
but you need specific information tailored to fit you. That’s
where I come in. 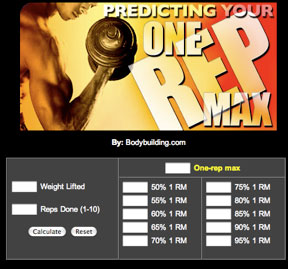 Those online max lift predictors are useful, but limited.

If a person says they can bench press 200 pounds for an 8 rep max, what
do you think the probability is that the same person can do 210 pounds
for one rep? Hopefully you answered “very high”
because if you can do 200 for 8, then you can do 210 for one. What do
you think are the chances of that same person benching 400? Practically
nil. The strength required to bench 400 pounds is much greater than what
is required to do 200 for 8.

This idea translates into the fact that every rep you perform, beyond
the first rep, is worth a certain number of additional pounds. This is
written as pounds per rep. If you can incline press 150 pounds for 10
reps, and you knew for sure that every rep at that weight was worth an
extra 5 pounds, you can now figure out what your max single would be.
The procedure to do so is outlined below:

So using that basic formula, we estimate that this person can do a max
single on the incline with 195 pounds. We got this because doing 150×10
basically meant the person had 45 extra pounds in the tank, so they could
lift 45 pounds over the 150 pounds they were already lifting.

Now, in the above problem we needed to know the pounds per rep and I
just gave it to you because I said it was 5 pounds per rep. When you
look on a chart it’s doing the same thing, it’s telling you what value
each rep has. But there are some problems with the generic charts.

Gender: Men have a higher conversion factor than women, so each additional
rep a man does is worth more weight. This means that women will be better
at doing reps but guys will be better at going heavy, everything else
being equal. For example, if a man and a woman can both leg press a maximum
of 180 pounds for 10 reps, I would predict that the man will still have
a higher single rep max even though the chart says they will be the same.
This is also why when you take just a little bit of weight off the bar
for a woman they often get a good number of reps with it. 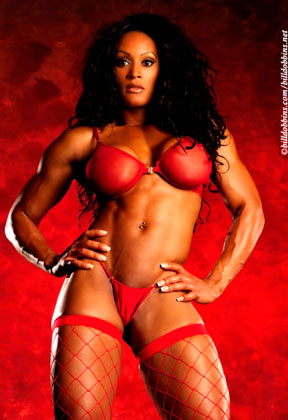 Go ahead. Tell her she has a lower conversion factor than a man.

Neuromuscular coordination: Also known as “skill level.” The more skilled
you are at the exercise, the more each rep is worth.

The exercise itself: Something worth noting is that the conversion chart
is exercise-specific. If you can barbell curl 100 pounds for ten reps,
that will give you a certain one rep max. It doesn’t follow that if you
can also bench or squat 100 for 10, then your one rep max will be the
same thing.

Muscle group size: Larger muscle groups have a higher conversion factor.
When you add just five pounds on triceps kickbacks or lateral raises,
you really feel the difference because only smaller muscles are working.
So a small change in weight will significantly affect how many reps you
can do. When you add five pounds to a lat pulldown or a deadlift it doesn’t
have the same effect.

Number of reps: Most conversion charts acknowledge that the more reps
you do, the less accurate any prediction is for a single rep max. Most
charts go up to 12 reps but if you want to estimate your one rep max,
using a set of 3 or 5 is a better idea. Anything above 12 enters in a
lot of error. This is because each rep isn’t weighted equally, even though
most charts have it set that up that way. It takes more strength to go
from doing one rep to getting a second rep with heavy weight than it
does to go from doing 11 reps and then getting that 12th rep with a certain
weight.

Now let’s see how easy it is to create a conversion chart custom-tailored
for you. All we need to know are two max sets for the same exercise,
with a different number of reps in each set. Preferably 12 reps or fewer.
You can do these two sets on the same day, or you can do them spread
out over a few days, but don’t wait too long or it won’t be as accurate.
If you do them on the same day, you want to be as fresh as possible for
each set, so rest 5 to 10 minutes in between each set.

To use this method, first warm up as usual for your exercise of choice.
Next, pick a weight you think you can do for 6-10 reps and try to perform
as many reps with that weight as you can. Go to positive failure, meaning
that if you did another rep you would definitely fail. If you do fail
on a rep and require a spot, don’t count that rep since you didn’t complete
it yourself.

Let’s see how it works. Imagine you’re a male lifter who wants to predict
your single max weight on the bench press. For your first set, you lift
245 for a max of 10 reps. Next, rest a good long time, maybe five minutes
or more, until you’re no longer fatigued. (If you just can’t recover
from that first set, you’d do your second test set on another day.)

Next, select a weight you think you can do for 1-5 reps, or go up 20-75
pounds (the more weight you’re lifting, the more weight you should increase).
Let’s say you choose 275, and you’re able to do 6 reps with it. With
that information, we can now figure out what your conversion chart is
on the bench press. Here’s how you do it:

From our example, we see that you have a conversion factor of 7.5 pounds
per rep in the bench press. Every rep you do is worth an extra 7.5 pounds.
It’s important to note that this is valuable not only for estimating
your one rep max, but also for selecting the appropriate weight for almost
any number of reps. For example, your conversion spread would look like
this:

The following week, if you wanted to do a tough set of 8 on the bench,
you should choose 260. If you wanted to go for a heavy set of 2, then
305 would be a good guess. There is still some room for error in this
formula, but the point is that figuring out your very own personalized
chart will be more accurate than using an online chart designed for the
lifting public at large. And once again, this is only your conversion
factor on the bench press. It doesn’t apply to skull crushers, lat pulldowns,
or deadlifts. If you were interested in those numbers, you would need
to do the same process with those exercises. 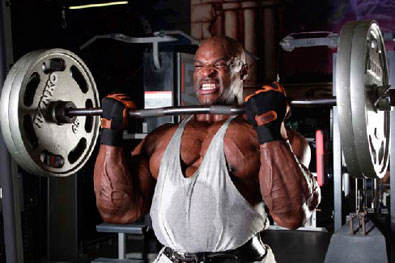 Remember that your conversion factor for one exercise doesn’t translate
to other exercises.

Listed below are some example sets with the conversion factors figured
out so you can see how I’ve done it.

(taken from Brian Siders’s lifts at Kings of the Bench)

Do you hate math? Then the following table may be helpful for predicting
your pounds-per-rep conversion factor based on your max lift poundage,
without actually doing the calculations.

Remember, though that this quick-and-dirty chart is just a rough guideline.
If you want it to be more accurate, you’ll have to do the tests on yourself
and do your own conversion chart. Knowing your conversion chart can be
very useful when trying to select your weight for your sets. It also
makes it clear why you fight and claw for that extra rep. When you go
from benching 250 for 5 to 250 for 7, you’ll know that your one-rep max
just went up. This information can also be useful if you work with other
people, because sometimes selecting weights for someone whose strength
level is different from yours can be a challenge.

I’ve tried to be as clear as possible when explaining this, but if you’re
having a hard time setting up a conversion chart for yourself, post your
sets in the article discussions section and I’ll try to talk you through
the process. You’ll need to tell me the exercise, the poundage, and the
number of reps you did for each of the two sets. Remember, also, to do
them with the same form.