If you came here looking for info on how to create a pretty-boy waist, this isn't for you. The fact is, I don't train my midsection to be pretty. I train it to be strong. It needs to be a piece of iron connecting my upper and lower body. However, when I train my abs that way, they inadvertently end up looking great. Here are the three keys to building strong abs that look great too.

Nothing builds a strong midsection like doing exercises where you stand erect with a heavy weight, which is why my training includes tons of the following:

Zercher holds will absolutely kill your midsection. I've never felt intra-abdominal pressure to the degree that I feel on this exercise. I do a quarter Zercher squat and hold the position for 6-9 seconds.

You must tense your abs super hard. Imagine you're about to get punched in the stomach. Squeeze your glutes as hard as humanly possible. If you don't, your lower back will take too much of the load. Don't lean back even one bit. Doing so not only makes the exercise worthless, it also makes it dangerous.

Anderson squats (as demonstrated by strength coach Rob King in the video) are back squats from pins from the full squat position. You start the squat from the down position instead of from the top.

Just getting into the start position is really hard if you have average mobility, and it's super hard to produce tension directly from that same position. And no, it's not like doing a paused squat... it's not even on the same planet! To do these, you must overcome inertia while going from zero tension to maximum tension. It's very hard.

These are something that were a huge part of my training when I competed in weightlifting. They place a very high systemic load on the body.

While the lower body doesn't work over the full range of motion, your midsection stabilizes the supra-maximal load just the same. As such, it's a great way to build tons of strength there, while also getting used to the feeling of very heavy loads.

Note that in the video I'm using a 90-degree squat, but sometimes I squat to a higher depth than that (100-110 degrees) so I can use even more weight. At 90 degrees I get a good training effect on my quadriceps, but at 110 degrees the impact on my midsection is even greater.

Put the safety pins high in the power rack. Then set yourself up under the barbell and grasp it as if you had just finished a press. Lock your elbows while you get into a quarter squat. The height of the pins should be set so that when you're grabbing the bar and the elbows are locked, you're in a quarter squat.

From there, while keeping your elbows locked, stand up and hold the position for 6-9 seconds. This works great to build serratus strength, shoulder stability, and a strong midsection. Make sure to tense up your abs before you lift the weight.

You can do these from varying heights – pull from below the knees and sometimes from above the knees to go really heavy. Yielding isometrics with big weights can be used too: Start with the bar at the knees, lift it one inch and hold the position 6-9 seconds.

Try to include at least two or three of these movements in each of your training sessions.

I keep my barbell work heavy, but to have a complete midsection, both functionally and visually speaking, you need to build resiliency. To do that, my tool of choice is loaded carries. My two favorites are the conventional farmer's walk and the Zercher carry using a strongman log.

Walk 30-40 yards, but it's good to occasionally do longer distances when endurance is the goal. Do either farmer's walks or Zercher carries once a week, year-round.

Isolation movements are mostly a way to improve the mind-muscle connection with the abs. Isolation exercises sensitize the abs to being recruited and makes them better at creating tension.

I'll use isolation exercises for three weeks in a row and then not at all for a while (4-6 weeks). During that three-week "blitz," I train them at the end of each workout.

Understand that improving muscle recruitment is a motor skill, and neurological adaptations peak at three weeks. After three weeks, you might still have some progression, but it's very small and not worth the effort.

The benefits of isolation work are almost insignificant. The real improvements come from diligent work on the other two categories (heavy overloads and loaded carries), as well as regular heavy lifting on squats, deadlifts, and the Olympic lifts. The isolation work only serves the purpose of making those intense strategies more effective.

When it comes to isolated ab work, I don't use any fancy techniques or movements, just cable crunches and Swiss ball crunches.

Before starting a rep, contract the abs as hard as possible. When initial tension is established, CURL your torso (it's not a flexion, it's a curl/rolling action). When you roll forward and reach the end of the range of motion, again tense the abs as hard as you can and return to the starting position. Do this on every single rep.

When doing isolation work, the goal is not to use more weight or do more reps; it's actually to try to fail with as few reps as possible. This indicates that you're good at tensing your abs hard, so they fatigue sooner. If you have to do 20 to 30-plus reps to feel your abs, you suck at recruiting them!

I do standing, loaded planks, otherwise known as Zercher holds! Planks might be good to retrain you to properly use your core to stabilize your body, but once you can hold a plank with perfect form for 30-45 seconds, move to heavy loaded work and carries.

The obliques work really hard to create intra-abdominal pressure. As such, all you need to do for them is overload work and heavy lifting. 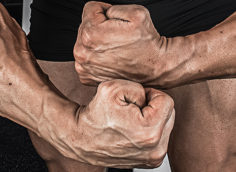 Test your grip, then make it even stronger. Here's how.
Training
Jason Brown June 11

Soft tissue work on the roller is okay before workouts, but it's best done after training. Here's why.
It Hurts Fix It, Tips, Training
Dr John Rusin May 31 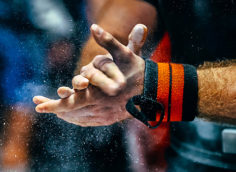