My two most popular training articles have been the Anti-Bodybuilding Hypertrophy Program (ABBH) and Total Body Training (TBT). Both programs have helped thousands of lifters build more muscle and strength while staying lean. Without a doubt, they both work. But whydo they work so well?

The two most effective training structures are total body and upper/lower splits. An upper/lower split is pretty straightforward. In one session, you focus on upper body lifts, and the next session consists of lower body lifts. Monday might include rows, presses, curls, and external rotations. Wednesday could have deadlifts, pistols, calf raises, and ab work.

A total body session, in my world, consists of at least each of the following lifts in every session: compound upper body push, compound upper body pull, and a squat or deadlift. The dip/chin-up/deadlift is a good example of the minimum required for a total body session. Of course, you can throw in whatever other exercises you desire, as long as the big three are involved.

Since both structures can produce outstanding results, it only makes sense to take the benefits of both ABBH and TBT, and devise an even more effective plan.

There are some similarities between the two methods, but there are also a few distinctions. The biggest distinction is that ABBH is an upper/lower body split while TBT is, of course, total body training.

Obviously, I like both methods. But you're not relegated to performing just one or the other. If you can train twice each day, you can reap all the benefits of splits and total body training.

An upper/lower split allows you to perform more volume per bodypart in each training session. For some athletes and bodybuilders, this is ideal. Bodybuilders need plenty of volume, with a high intensity in each session, for maximal muscle growth.

Problem is, this can be difficult when you're following a total body structure in each session. By the time you make it to squats or deadlifts, you're pretty beat.

Athletes benefit from upper/lower splits because they typically perform a lot of neurally-demanding exercises throughout the season, with plenty of games and practices. Splits give the nervous system a break.

I also like splits when a lifter needs to include additional mobility and joint rehabilitation exercises. If they included all those supplemental exercises in a total body session the workout would be too long.

A total body training session, on the other hand, allows you to recruit a greater amount of muscle mass. It's also excellent for building your overall work capacity, while boosting your anaerobic energy system.

Since many lifters need to increase their work capacity and lose some bodyfat, I typically lean towards total body sessions when you're limited by training time. A heavy circuit of the dip/chin-up/deadlift with short rest periods is much more demanding than any "chest and shoulder" workout.

This is especially true with professional and Olympic athletes who train multiple times each day. Most people aren't Olympic athletes, but it's still wise to use those same effective principles to build a better body, and apply those principles in a more realistic, real-world manner. That's what the total body split will do.

My biggest beef with splits is that the weekly frequency of training movements or bodyparts is too low for optimal results. As a rule of thumb, if you're not an athlete, you should train each movement or bodypart three times each week.

If you're an in-season athlete, hitting each movement twice a week works well, especially late in the season when injuries run rampant. By following a total body split, you'll derive all of the split benefits while training with an optimal frequency.

When training for size and strength, your goals should be to:

Total body workouts are best for points 1-3, while a split is ideal for point 4. If you're not an athlete, and if you can only train three times per week, total body sessions are still the way to go. But... if you can train more frequently, an effective split can be the springboard that propels you to the next level.

First off, can you train twice each day for two or three days per week? If you can, read on. If you can't, this information isn't for you.

It's more effective for recovery because it's easier for the body to recover from two 30-minute sessions, instead of one 60-minute session. Plus, two sessions per day gives you two opportunities to flood your muscles with a post-workout drink, when nutrient uptake is most sensitive. So twice-daily sessions can result in twice the anabolic response.

So let's take a bare bones total body session, divide it into an upper/lower split, and build from there. Here's our starting point:

When training twice per day, each session should last around 30 minutes. Since I usually keep the rest periods short, and because I typically advocate cycling between two or more exercises, the sessions are very time-efficient.

You'll still get plenty of rest before you repeat an exercise, so you'll be able to keep pushing heavy weights and you'll have the opportunity to include many different exercises. If you adhere to the guidelines in The Set/Rep Bible, you'll be in great shape.

A set/rep volume of around 25, with 85% of your one rep max (1RM), is a favorite of mine. If you don't want to calculate your 1RM, just start with a load you could lift for six reps before reaching failure. Use this same load for all sets. Keep the rest periods around 30-60 seconds between pairings or giant sets.

Now, let's say you want to add in some upper arm, delt, and shoulder rehab work to the aforementioned upper body workout. An example of an effective circuit would be hammer curls, triceps extensions, side raises, and external rotations. I favor circuits for all the reasons I mentioned above. They're time efficient, while also allowing for sufficient recovery before you repeat an exercise.

Old-school bodybuilders and strength athletes would often sit around for three to five minutes before repeating an exercise. This is an ineffective way to train since it doesn't build your work capacity and it won't do jack shit to burn off fat. Spend that three to five minutes training other movements.

With the lower body workout, you might want to include some additional quad, glute, and calf training. An example of a circuit would include single-leg squats, mule kicks, and incline leg press calf raises.

Here's how the additional components will look:

At this point you've got a kick-ass upper/lower split, but you're still training your entire body each day. Each session lasts 30 minutes or less, so you'll manage fatigue and minimize overtraining.

I've written ad nauseam about the limitations of typical bodypart splits, so I won't re-hash those points here. But I also respect that many lifters need more volume and intensity than a total body workout might allow. Here's a way to make a bodypart split more effective for enhancing muscle and strength, while also boosting your fitness levels.

A key point with the above plan is that you should use different movements on Monday and Friday. I'll use the P.M. sessions as an example. On Monday you'll perform a front squat, reverse crunch, and leg press calf raise. Wednesday it's deadlift, ab wheel, and seated calf raise. Friday could be single-leg squat, side plank, and single-leg calf raise.

Take special note of Wednesday. Since it lacks an upper body pulling exercise (because it's shoulders and arms), I recommend complimenting your morning session with the deadlift in the evening.

The reason? A deadlift is about as close to a true upper body pulling exercise as you'll find. This balances out your total body training for the day.

Obviously, there are countless variations you can make on this theme. Maybe you can train twice a day Monday and Friday, but only once on Wednesday. If that's the case, perform a total body session on Wednesday. Adhere to the guidelines in The Set/Rep Bible for your weak areas, and perform half that volume for your strong points.

For example, if you're a bodybuilder that has naturally big thighs, simply perform 2-3 sets of 5, instead of 5-6x5. This allows you to keep the sessions as short as possible while staying true to the total body training philosophy.

You don't have to be a competitive Olympic lifter to benefit from the clean. Build power and explosiveness with one lift. Here's how.
Athletic Performance, CrossFit, Powerlifting & Strength, Training
Josh Brown April 14 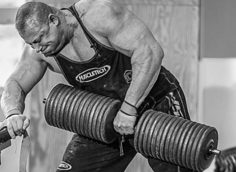 Yes, it looks kinda cool, but you probably don't need it. Do this instead.
Back, Bodybuilding, Tips, Training
Nick Tumminello January 17

All you need to do is diet and you'll have abs, right? Not really. It's a bit more nuanced than what your favorite meme says. Here's why.
Abs, Tips, Training
Christian Thibaudeau January 30
What would you give to have delts so big and wide that you had to strip naked and coat yourself with lard before being able to pass from room to room?
Training
Don Alessi March 21