Super high-rep sets of 20 or beyond present kind of a contradiction. They’re done with light(er) weight so they seem less important, less manly than more traditional, heavier bodybuilding rep schemes (6-10).

But here’s the thing: High-rep sets, done properly, require a helluva’ lot more concentration and exact a lot more pain than low-rep sets. They in fact require extra toughness because they take so long and burn so much (if done honestly).

The former just involves a few seconds of discomfort while the latter results in a prolonged period of agony, and, like a staple in the balls, the high-rep sets result in a lot of perceived humiliation because you’re invariably lifting something that’s not much heavier than a paperweight.

But all of this begs the question, why even bother with them? They don’t build muscle and they’re only done by old ladies with bat wings that rival those of the Caped Crusader… or so we thought.

According to research by T Nation and PhD-type smart guy Brad Schoenfeld, high-rep sets do build muscle, and just as well as low-rep sets. This is potentially great news for those suffering from some injury that makes heavy or heavier weights problematical, or for older types who’ve worn their joints down to the nub.

It also invites experimentation with a rep range that few lifters in general have ever bothered to explore.

What Brad and His Cohorts Did

Schoenfeld recruited 18 young men who’d been training for an average of a little over three years. They were split into two groups, each of which performed full-body workouts for three days a week for eight weeks.

All of them trained to failure on the bench press, military press, lat pulldown, cable row, squat, leg press, and leg extension.

After eight weeks, wonder of wonders, both groups gained pretty much the same amount of muscle. That means, at least as far as this study is concerned, that weight doesn’t matter.

“Provided that maximal hypertrophy is the primary outcome goal irrespective of strength increases, these findings suggest that a new paradigm should be considered for hypertrophy training recommendations, with low-load training promoted as a viable option.

“On the other hand, if maximizing strength gains is of primary importance, then heavier loading should be employed at the exclusion of lower-load training.” 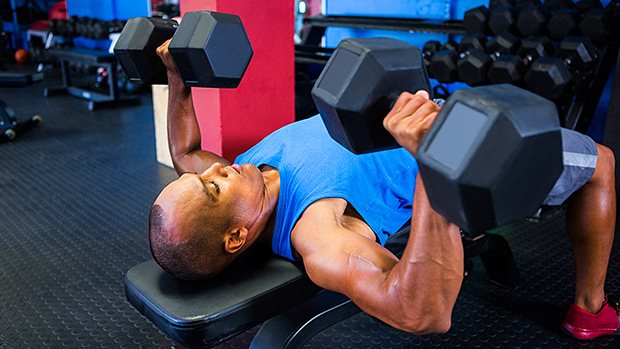 I found Schoenfeld’s study to be personally gratifying and comforting. For one thing, nothing hurts so much as sets of 20-plus reps and I, like a lot of deranged lifters, like the pain and sense of having worked hard that you get from sets that burn like hellfire.

Secondly, and more importantly, my shoulders are currently ailing. I’ve got what I think is thoracic outlet syndrome (TOS) and the popping and crackling sounds my shoulders make when I bench makes me think of a roaring campfire, albeit without the hot toddies.

This has forced me to use lighter weights, but I’ve still been operating under the delusion that I’m steadily shrinking to my pre-workout, Star Trek geek days, but if the results of this study are to be believed, I’m not shrinking at all.

So I’ll continue my rehab while doing very high reps for chest and shoulder work, confident and happy in the fact that I won’t be losing muscle.

I’m sure there are thousands of lifters currently experiencing a similar phase where some joint or limb is rebelling against them. Adopting ultra high-rep sets like the ones in this study should help them weather the orthopedic storm, physically and psychologically.

Further, even joint-healthy people might use this info to have less of a jaundiced view against ultra high-rep sets and occasionally incorporate them into their training cycles to expose muscles to an entirely unexplored rep range.

Of course, only the most confident, self assured, I-don’t-give-a-shit-how-much-weight-you-see-me-using lifters will attempt this type of rep range.