A Ban On All Standard Push-Ups!

There should be a temporary ban on standard push-ups. Such a ban might, after a few months or years, remedy the epidemic of misshapen, under-developed upper chests that are all-too common.

Researchers in Korea might have found a simple, do-it-at-home remedy to this condition. It’s called the flexed-trunk push-up. Instead of keeping the torso parallel to the ground, you flex your trunk as shown in the photo. 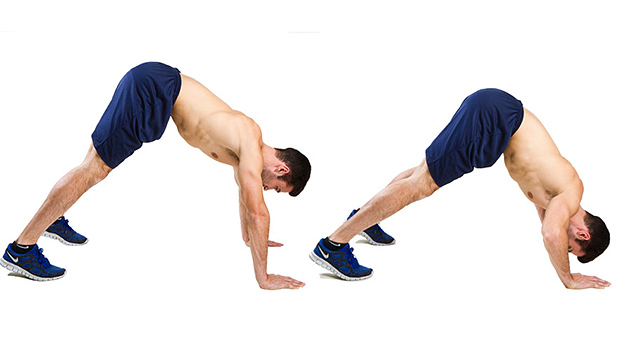 The researchers recruited 15 guys to compare the activity of the shoulder and trunk muscles in two push-up positions, the conventional one and the flexed-trunk version where the butt is in the air and the lower body is flexed at an angle of 30 degrees.

They hooked them up with electrodes and as you might guess, the activity of the lower, sternocostal portion of the pec major, along with the activity of rectus abdomins, was significantly greater with regular push-ups.

However, the activity of the clavicular portion or upper part of the pecs and the serratus anterior (the sexy, shark-gill muscle group on the sides of your rib cage) was much higher with flexed-trunk push-ups.

That gives you an easy way to offset all the work you do for the lower part of the chest. Go slowly on the eccentric or lowering portion of the push-up until you gain some mastery; you don’t want to give the ground a head butt.