According to a new study, full-body workouts suppress hunger more than upper/lower splits, even when training volume is equal. That could help dieters stay in control.

On the flip side, full-body training may not be the best choice for the skinny folks who don't have much of an appetite to begin with. They would be better off with upper/lower, push/pull, or some variety of bro split.

From a muscle-building perspective, most studies show there isn't much difference between various training splits, assuming weekly volume per body part is equal (1).

For example, training chest in two weekly workouts of 6 sets per session won't produce much difference in muscle protein balance compared to doing three weekly sessions of 4 sets per workout. By the end of the week, you're still doing 12 working sets of chest and triggering the same amount of protein synthesis.

But what about other factors, like how different training splits affect appetite? A group of Brazilian nerds recently conducted a study on this very topic (2).

Researchers took 12 recreationally active men with about four years of training experience and put them all through three different workouts, all separated by a washout week.

Notice that the training volume was equal between groups. All three conditions had participants doing 18 total sets.

A subjective hunger scale measured hunger at multiple points. Ratings were the same after an overnight fast, after breakfast, and before exercising to limit confounding variables. In other words, everyone had the same appetite prior to doing the workouts.

That said, post-workout measures found an interesting trend. An hour after training, the upper and lower-body workout group reported DOUBLE the hunger ratings compared to the full-body group, which reported the strongest appetite-suppression effect.

Why Did That Happen?

Blood lactate levels, measured in all participants, were strongly correlated with the decreases in hunger. The more lactate was produced, the less hunger was perceived.

If you're not dieting, don't struggle with appetite, or couldn't care less about maximizing satiety, just do whatever training split you enjoy most. It's not that big of a deal.

However, if you want some additional appetite-suppressing benefits, a full-body training split is worth considering.

Another unique way to look at this study is for hardgainers. Skinny guys and gals usually struggle to eat enough, so choosing a body part split or upper/lower split where less total muscle mass is trained each day could "free up" some appetite and make caloric targets more practical.

Build your scrawny looking delts, weak upper chest, and nearly nonexistent serratus. Here’s how.
Bodybuilding, Training
Lee Boyce October 29
If you've been training as long as I have, I'm sure you can relate to feeling a bit stale and uninspired with your workouts at times.
Training
Charles Staley August 22 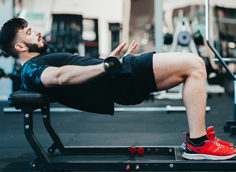 You might already be doing hip thrusts, but you probably haven't tried these killer variations.
Training
Dan North May 27