Years ago I had this crazy idea for losing fat.

I was reviewing a weighted vest for an older version of our "Stuff We Like" column. After putting the vest through its paces in the gym I thought, "Hey, I wonder if I could wear this thing all damn day, burn more calories from carrying around that extra weight, and turn this 4-pack into a 6-pack?"

So I did it... for a few days. Then I noticed the vest was pulling my shoulders down awkwardly and causing my traps to get angry. In hindsight, maybe I shouldn't have loaded the vest up with 65 pounds.

Yeah, that was dumb. But maybe the idea itself wasn't. Swedish researchers conducted a similar study and their findings are pretty interesting.

Researchers at the University of Gothenburg wanted to see if wearing around a weight vest during normal daily activities would result in the loss of bodyweight, particularly fat mass. So they gathered up 69 mildly obese Swedes and instructed them to wear the vests for 8 hours per day for three weeks.

The group wearing the 24-pound vest lost an average of 3.5 pounds during the 21-day testing period without changing their normal diets. They also retained all of their previous muscle mass. (The control group participants – those sissies – dropped about half a pound of fat.)

They participants of the study simply burned more calories while doing their normal daily activities like making flat-pack furniture for divorced guys, eating meatballs smothered in sour cream, and dancing to Ace of Base. (Sorry, I don't know much about Sweden.)

Well, maybe, but the researchers had another theory. They think the results might have something to do with your body's energy balance system – that tricky biological machination that works to keep your bodyweight fairly constant.

They call it the "gravitostat" because they're Swedish and therefore like to make up weird words, but you can think of it as your bodyweight set point. This homeostasis takes place in part via appetite signaling. Then there's DNA, gene expression, and... well, it gets complicated.

Basically, the scientists theorized that wearing the weighted vest 8 hours a day makes your body say, "Whoa, that's weird! I'm 24 pounds heavier all of a sudden and that ain't right! I'll just drop some fat to get rid of it."

That's a smidge oversimplified, but you get the gist.

Losing 3.5 pounds of fat in three weeks may not seem like much, but remember that the folks in this study didn't change their diets or adopt a special training program. They just lived life.

If you want to replicate the study and don't mind looking like you're wearing a bulletproof vest while grocery shopping, just wear a 20-25 pound weight vest for 8 hours a day for three weeks. I'd skip it during your workouts because that could throw off your training progressions. (But definitely keep it on during sex because life is short and you need to get freaky-deaky sometimes.)

If the gravitostat idea is true, maybe you could combine the vest wearing with a sensible reduction in daily calories – like 200 a day below maintenance – and experience even faster fat loss while protecting your muscle mass.

Just don't use a 65-pound weight vest and assume you'll lose fat even faster. Only a dummy would do that.

The squat may be the king of all exercises, but it's also the one that's screwed up the most. Are you making any of these mistakes?
Bodybuilding, Powerlifting & Strength, Squat, Training
Eirik Sandvik October 5 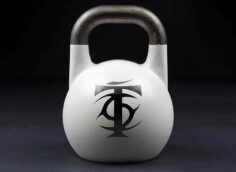 The best kettlebell workout. The most powerful kettlebell exercise plus hardcore strength work. Get ready to be better... at everything!
Athletic Performance, Challenge Training, Fat Loss Training
Dan John June 4