If you're training around knee pain, or just wanting to make the lunge feel right, try reversing it. Wait, lunge backwards? Yes, but the change of direction isn't the only difference between the reverse lunge and the more common forward lunge.

The forward lunge involves a more vertical torso and increased shin angle, making it a more knee-dominant exercise. It increases activation and force production at the quads. The problem with only using the forward lunge is that very few people actually need more direct anterior chain (front of the body) work due to the postural "demands" of our modern lives. We're generally chained to desks, cell phones, and car seats.

As a result, the world is full of weak asses. You may have one, and the reverse lunge will help solve and prevent this problem.

By changing the direction of your lunge, a few key mechanical alterations happen, mainly the increased angle of the torso (a more chest pointing down position) and the shin staying in a more vertical position relative to the ground. Though this change of angulation at the torso and shin are slight – between 10-25 degrees on average – it's just enough to change the force distribution between the anterior and posterior chains.

This variation strengthens the glutes and hams to a larger extent, and it's far more knee-friendly than the forward lunge. Go heavy, keep the reps smooth and controlled, and try a hold it at the bottom. Add an isometric hold on the last rep of each set to increase metabolic-stress while sparing the joints. Remember to do it for both legs. Hold for as long as you can without losing your form.

Don't make these stupid (but common) mistakes when you're dieting for fat loss or trying to build as much muscle as possible.
Bodybuilding, Diet Strategy, Fat Loss Training, Training
Paul Carter December 15

You don’t have to be an Olympian to do these. If you want to burn fat, increase power, and gain athleticism, master these lifts.
Training, Weightlifting
Lee Boyce December 26 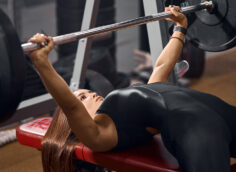