Time under tension (TUT) refers to how long the muscle is under strain during a set. For size gains, most think you need around 60-90 seconds of TUT.

Most lifters pay attention to rep speed to increase TUT. For example, they may do a biceps curl where they take 4 seconds to lower to the bar (the eccentric) and 2 seconds to lift the bar (the concentric) on every rep. That's a 6-second rep. Do 10 reps like that and you've reached 60 seconds of time under tension.

Altering rep tempo is one way of increasing time under tension. However, simply slowing down reps doesn't necessarily mean you'll increase TUT unless you have a pre-determined rep scheme. So if you're doing sets of 10 bicep curls and decide to increase your rep tempo from 2 seconds down, 1 second up (2:1) to 4 seconds down and 2 seconds up (4:2), you increased time under tension.

Now, assume you're going for 60 seconds of TUT. You could do 20 reps at 2:1 or 10 reps at 4:2 or any combination of reps and rep tempo that will equal 60 seconds. However, when you alter rep tempo while maintaining a similar rep scheme, the volume load changes.

This is what makes studying TUT so difficult. Intensity (load), load volume, rep tempo, total time under tension, and training to failure (or not) are all intertwined. When you adjust one, the others fluctuate too.

Researchers have been trying to determine the best rep tempo with mixed results for this reason. This new study compares two different rep tempos and the effect they have on strength and hypertrophy.

Twenty-four male, collegiate soccer players were recruited for the study. They were split into two counterbalanced groups. Both groups underwent back squat training twice a week for six weeks.

They did 3 sets until failure at 75% of their 1RM. The only difference was that one group used a 2:2 eccentric/concentric rep tempo and the other used a 4:2. Both groups were given 25 grams of protein in a shake immediately post workout.

The volume load was significantly higher in the 2:2 than 4:2 group (36% greater). The 2:2 group did more reps across each set before failure.

Now for the hypertrophy results you've all been waiting for. There was no difference between groups in cross-sectional area of the thigh. Significant increases in CSA at proximal, middle, and distal thigh were seen in both groups. And the increases were greatest in the distal portion (closest to the knee).

What All This Means

Time under tension has to do with total SET duration, not REP duration.

Across multiple weeks with a total TUT equivalent, the greater benefit still seems to come from the group with a greater load volume. Why? Because although gains in CSA were similar in this study, the strength gains between groups were not.

The significantly greater total eccentric time in the 4:2 group didn't lead to greater hypertrophy. While slow eccentrics and longer rep durations can be useful in certain situations, the evidence for their superiority in muscle growth and strength is lacking.

With time under tension the same (equivalent total set duration) it appears more effective to do more reps at a slightly faster tempo.

In part 2 of our training roundtable, our moderator asks Dave Tate whether you have to look strong to be strong, causing Dave Tate to get really red and start busting up stuff.
Training
T Nation February 26 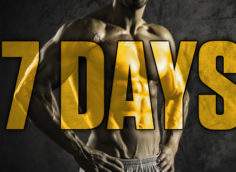