Olympic lifting coach Glenn Pendlay said it best: "Show me a guy who can push press a big weight and he's going to be able to excel at any other pressing movement, even if he's never done it before. The push press has more carryover to pressing in general than any other upper body exercise."

A big bench presser doesn't get that same carryover according to Pendlay: "I don't want to have 400-pound bench pressers who can't do anything else. The guy who can do heavy push presses doesn't have that problem. He's strong at everything. And that can't be done with the strict military press either. It's too hard to get it moving. You have such a weak point at the start that it limits the amount of weight you can use."

With a push press, you can put 10 to 20% more weight over your head. You're forced to develop the ability to recruit those muscle fibers very quickly because you're pushing the bar off your shoulders with your legs and then your arms have to come into play, fast, so it doesn't stall. "The ability to do that is very, very valuable," said Pendlay.

With the push press there's just a huge overload at the top. That last six inches at the top is like doing a partial. That has a powerful effect on the body.

Pendlay's tips for the push press: 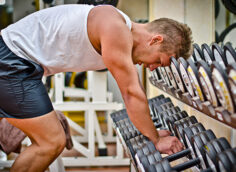 Are you shooting yourself in the foot? Here are the common training mistakes that even serious lifters make.
Christian Thibaudeau September 27

Hit every major muscle group and train every movement pattern with this unique and challenging full-body workout.
Metcon, Tips, Training
Christian Thibaudeau August 15
This is Lucky 13, a rapid fire Q & A session with a training or nutrition expert who matters. It's fast, furious, and to the point.
Training
Chris Shugart December 21

Becoming a better, stronger lifter takes years of practice, but you can speed up the process by remembering a few simple cues.
Powerlifting & Strength, Training
Tony Gentilcore October 7