It's one of the simplest intensity techniques there is. You do a certain number of reps to – or close to – failure (usually around 6), then rest for a short period of time (10 to 20 seconds) then resume the set with the same weight, trying to get as many extra reps as you can.

That's the simple form of rest/pause. I wrote a comprehensive article on various rest/pause techniques that you can use. These certainly have their place. But they're extreme methods that can't be used often or for long. Regular rest/pause sets can be used weekly as long as you stay conservative with the volume.

My intensity recommendation for rest/pause is to start with a weight you can lift for six to eight reps. Rest for 10-20 seconds and get as many extra reps as you can.

Now, "maximally-effective reps" is a term coined by hypertrophy nerd Chris Beardsley to explain reps where all the fast-twitch fibers that you can recruit are being recruited and stimulated. Since these fibers have the greatest growth potential, these reps will make your muscles grow.

Two rest/pause sets will have the same impact on muscle growth as four to six regular sets without the drawbacks that could actually limit how much growth you're getting from your workout.

You should do two rest/pause sets, maybe even just one. It could look like this:

Manipulate your training to accommodate for how you feel on a given day. If strict programming has been holding you back, do this instead.
Powerlifting & Strength, Training
Christopher Smith March 30 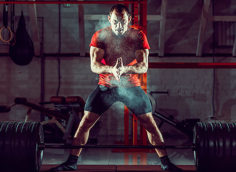 Trying to build muscle? It's not the exercise that matters most, but the way you're doing it. Here's why.
Bodybuilding, Tips, Training, Traps
Paul Carter April 26