Work Your Abs Like a Woman, Not a Man

Now before all you women out there stand up on your chairs, point your fingers at the computer screen, and shout "J'accuse!" at me for my alleged blatant sexism, let me qualify that statement.

If you're a female powerlifter, you should indeed work your abs like a man. If you're some sort of athlete who uses weights to enhance your performance on the field, then again, yes, work your abs like a man. Or, if you're a woman who just doesn't give a crap about social conventions or attractiveness to the majority of males and just wants to get as powerful and formidable as possible, then go ahead, bust up those bad boys and work them like a man.

However, most women want to have a waist as narrow as possible and do whatever's necessary to achieve that much-vaunted 7 to 10 waist-to-hip ratio that's so highly coveted by Western society. As such, they're obsessed with working abs and the waistline. Where this gets especially problematic is when they start devoting a disproportionate amount of time to working their mid-section. They often do hundreds or thousands of crunches or side bends.

Furthermore, to get them to their wasp-waisted goal quicker, they unwisely start using more and more resistance, all the while forgetting that the abs and other muscles in the mid-section are like all other muscles in that they grow in response to volume and resistance.

Many women, and a whole lot of men, too, have made the mind-numbing assumption that extra reps or extra resistance will somehow slenderize the waist and sculpt away fat to reveal a beautiful six pack of taut, perky rectus abdominus muscles. Why they think that muscles in the mid-section are somehow different than other skeletal muscles in the body is a mystery.

Similarly, many of these ultimately blocky-looking souls will hang on to enormous weights at their sides – as if they were carrying buckets of steel rivets to the 33rd floor of the apartment building their crew is working on – and do side bends, all in a misguided effort to whittle away at their obliques.

If you train the abs or mid-section with undue volume or resistance, like a man, you'll develop a man-like waist. It'll get bigger in all directions. Oh, you may ultimately get a six-pack (underneath the fat you failed to whittle away), but each of the paired muscles of the rectus abdominus will be the size of the beer cans in an actual six pack instead of the sleek, barely raised bands of muscle you're presumably looking for.

The rest of your body? That's the stuff you should work like a man.

Get ready to mutate, in a good way. Here’s weeks 4-6 of a Coach Thibaudeau’s 12-week transformation plan.
Bodybuilding, Training
Christian Thibaudeau May 28 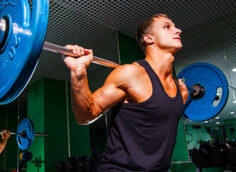 Even experienced lifters can make these mistakes. Are you?
TJ Kuster May 13