If you’ve ever watched Sylvester Stallone in “Rocky” doing one-arm push-ups and you didn’t want to start doing them immediately, then I don’t know what can motivate you.

But here’s the thing about Rocky’s one-arm push-ups: they’re kinda, well, questionable. Sure, he looked like a total badass while doing them, but were they legit? 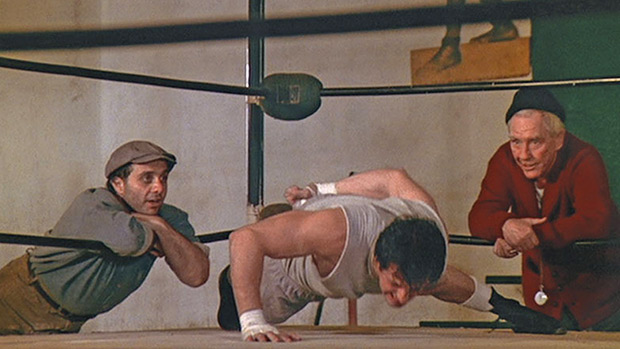 If you go back and watch it, you’ll see his legs are overly straddled, his chest doesn’t touch the floor, his elbows flair, and his other hand is behind his back for support.

Are these technically one-arm push-ups? Maybe. But like anything else, there are degrees of difficulty for every move. Of course you could argue that he was doing plyometric one-arm push-ups to work on explosive power (and you’d have a point), but if you’re doing them as a testament of strength, then you’ve got to do them with impeccable form.

It’s time to learn how to do a strict one-arm push-up.

For a “true” one-arm push-up you’ll have your feet about shoulder-width apart, your elbows will be tucked in, and there will be little-to-no sagging through your hips. Your opposite arm shouldn’t touch any part of your body and your chest should touch the floor.

If you follow the rules, it’s not easy. If you contort your body in a way that allows you to cheat… then it’ll look like how most people do it, which isn’t super hard but it isn’t super impressive either. Also, if you have any lower back issues, this exercise isn’t for you.

Here’s what it looks like when you cheat. My hips aren’t level, I’m using momentum, one side of my body is coming up before the other, and I’m using my other hand for support. A lot of people do it like this and think they’ve mastered the exercise. Nope.

If you want to start training the strict one-arm push-up, you should be able to rep out 20 regular push-ups first. This involves keeping your elbows tucked, your core tight, and getting your chest to the floor.

Once you can do this, use the progressions below to develop your upper-body strength and core stability.

This is a great way to learn strict one-arm push-ups. It works because it forces you to tuck your elbow into your side and allows you to absorb most of your bodyweight with one arm. Your other arm will be able to get past the sticking points that make the one-arm push-up so hard. Once you can do five of these on each side, progress to fingertip archer push-ups.

This will force you to use your pushing arm more than regular archer push-ups. You can only assist so much with your fingertips, so gradually removing a finger as you do this will mean you’re absorbing more and more of your bodyweight.

Once you get down to one or two fingers on your assistance hand, start practicing the one-arm push-up with support.