Most people do lunges while holding dumbbells at their sides or with a barbell on their backs. While there’s nothing wrong with either method, it’s rarely done correctly.

Instead, most lifters lean way forward, sometimes to the point of falling over. A slight forward lean is fine when you’re lunging without weights (it can increase glute activation) but when you add heavy weights into the mix, it’s putting the lower back in a precarious position.

Part of the problem is simply going too heavy, but the placement of the weights exacerbates the issue. Instead, try this:

Start by holding a dumbbell in the goblet position until you run out of weight, then progress to using a barbell with a front squat grip. 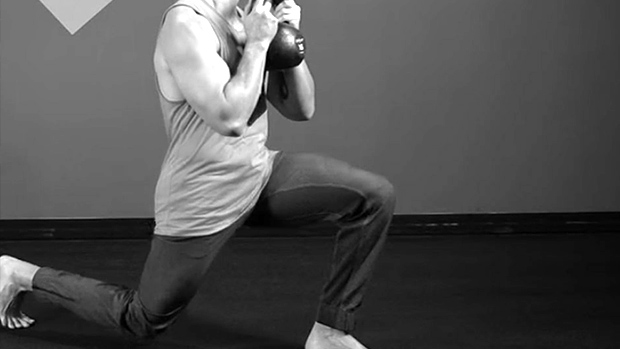 The front loaded position forces you to stay upright, putting less stress on the spine and more stress on the quads, where we want it.

There’s also a built-in protection mechanism against your own ego. It keeps you honest because you’ll need to go much lighter than you would if you were to hold dumbbells at your sides or put a bar on your back, and you can’t cheat or else you’ll drop the weight.

Loading the weight anteriorly provides an added core stability benefit as you must fight to resist flexion, giving you more bang for your buck.