Unless you're genetically gifted in the chest department, the barbell bench press won't give you a lot of chest growth. For most people it'll end up being more of a triceps or deltoid exercise. Why? Well, the pecs have several functions. When it comes to movements similar to the bench press, the main function is either transverse flexion or transverse adduction.

They're similar, but the biggest difference is elbow position. And in both cases the main element is bringing the upper arm toward the midline of the body, horizontally (imagine a dumbbell flye movement). In a barbell bench press your upper arm is limited in how much it can move toward the midline of your body because you're holding a bar. Only the first third of the movement has a significant amount of transverse flexion/adduction.

The only way to make a barbell bench press more effective for the chest is to do the bench press in an unsafe manner by pushing the elbows out of their socket (protruding forward) at the top of the movement which gives you a tad more transverse flexion/adduction but mostly a scapular abduction. But it's a high risk movement for shoulder well-being.

The Solution: Bench With Dumbbells

If you want to stimulate more chest growth, the dumbbell bench press is a better option... if you do it correctly. Dumbbells allow you to use a greater range of motion because the bar doesn't hit your chest preventing you from going lower. A greater ROM on pressing exercises allows you to recruit the pecs more because you increase the amount of transverse flexion/adduction you have to do at the beginning of the lift.

The Mistake to Avoid

When using dumbbells, most people actually use a shorter range of motion instead of a longer one. Maybe it's ego, but it's also because they don't have the barbell as a gauge to see where they're at in the lift. Lifters often use the weight plates on the end of a dumbbell as an indication as when to stop going down. In other words, when the end of the dumbbell begins to reach the shoulder, they stop. This cuts 3-4 inches off of the ROM. If you want to make the dumbbell bench press effective, you must bring your hands lower than your chest.

When you press the dumbbells up, press inward. Imagine moving the dumbbells toward each other, almost like a flye. Don't touch the dumbbells at the top. Just bring them as close together as possible, which will give you a lot more of loaded transverse flexion/adduction.

A simple, methodical way to hit new PRs on all the major lifts in just four weeks.
Powerlifting & Strength, Training
Tim Henriques July 12
Admit it. A lot of times you plan your workouts around your major muscle groups and just "throw in" a few sets at the end for your ancillary muscles – calves, abs, and forearms.
Training
T Nation July 13 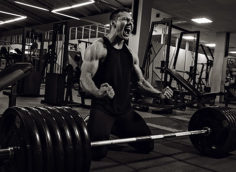 Check this out before you DIY your workout plan. Choose a lift from each section and get ready to dominate.
Training
Nick Tumminello March 6