The squat-stance deadlift combines the best elements of conventional and sumo. It basically has no sticking point. Unlike the other two styles of deadlift, it has even tension throughout.

This deadlift style has incredible transfer– squat to deadlift and deadlift to squat. Each time you train one, you're training the other. The squat-stance deadlift is also therapeutic. It promotes optimal movement while helping to eliminate dysfunction. Here's a quick tutorial: 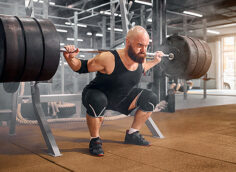 Keep your knees from caving in and you'll build bigger, stronger legs... without the pain. Here's how.
Training
Dan North August 19

Why are you wasting time between sets? Why the hell don't you do something, like grow, for instance?
Bodybuilding, Training
Nick Tumminello June 23

If you’re looking to jack up your wheels as fast as possible, this is the program for you.
Bodybuilding, Legs, Training
Christian Thibaudeau September 29