The earliest weight trainers often did 8 reps per set, probably because doing 6 or 7 didn't tucker them out enough and doing 9 and 10 reps got to be tedious.

It wasn't until years later, though, that weight-training science sorta-kinda confirmed the 8-rep standard as being a fair compromise between strength building and muscle building. Doing anything much beyond 8 reps, like 10, 12, or even 15 has been shown to be effective for hypertrophy, but most lifters largely avoid those "high rep" sets because their mind won't allow them to accept their efficacy. They seem too easy. The weight seems too light.

But maybe it's time to re-think that distaste for high reps because some researchers at McMaster University in Canada have done a study that shows that 20-30 rep sets are just as effective, and in some cases more effective, in building muscle than low or lower-rep sets.

The researchers recruited 15 weight-trained male students and had them do leg-extension workouts on three occasions.

Rep speed was strictly enforced. The researchers actually set up a metronome that enforced a 1-second lifting and a 1-second lowering rep speed. Each subject was allowed to rest three minutes between sets.

However, the high rep training activated the anabolic signal protein 4E-BP1 more than the low rep workouts, prompting the researchers to conclude:

This is just one study, and as provocative as it might be, few exercise physiologists would recommend that you give up heavier weight, fewer-rep training protocols and replace them exclusively with lower weight, higher-rep sets.

However, it seems like a good idea to throw in a few sets of higher rep (20 to 30) sets done to failure during hypertrophy-phase workouts. For instance, you might start your leg workout with 4 sets of heavy squats (6-8 reps), follow it up with 3-4 sets of narrow-stance leg presses (8-12 reps), and finish it off with 3 sets of leg extensions (20-30 reps).

That's a horribly generic leg workout, but it should give you an idea as to how to apply the conclusions arrived at by this study. 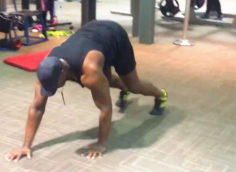 This is a great progression from the classic ab wheel rollout from the knees, especially for taller guys with long levers.
Abs, Exercise Coaching, Tips
Lee Boyce October 15 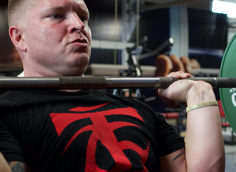 There are several ways to organize your training week, but one split is superior for the vast majority of lifters. Here it is.
Bodybuilding, Powerlifting & Strength, Training
Charles Staley May 31