Compared to the bench press, the push-up is often seen as a less effective alternative. After all, bench pressing is hardcore and push-ups are only for prisoners or people without gym access right?

People have this strange misconception that the heaviest exercises get you the most jacked but, physiologically, load is fairly irrelevant when it comes to building muscle.

External load isn't what drives muscle growth, but rather internal force production, otherwise known as mechanical tension. Load or any form of resistance – whether it's band, cables, or your own bodyweight – are merely tools to apply mechanical tension.

Don't believe me? Check out this new study.

Kotarsky et al took 23 intermediate male lifters and divided them up into a bench press group and a push-up group. (1) Both groups did three workouts a week for a month. Each workout had three working sets of about 6-8 reps, so 9 weekly sets total of horizontal pushing for both groups.

Both groups also had an objective progression model. That just means that once a performance was reached, progression was auto-regulated based on the study design.

For the bench press group, they simply added load like you would at the gym. Prove you got stronger by hitting the maximum rep range and slap on some more plates.

For the push-up group, they progressed in push-up variation. The study design had nine variations starting with the wall push-ups your sister did in elementary school all the way to one-arm push-ups.

These progression models are crucial because without them subjects are just training willy nilly instead of actually building strength and creating adaptations. Ironically, plenty of researchers don't implement them and pretty much end up wasting everyone's time.

From a statistical standpoint, both groups made similar progress on all measures except the push-up progression test where the push-up group did significantly better. Not too surprising there.

As far as muscle size goes, push-ups were just as hypertrophic as benching. But let's look closer at the data.

When looking at the average raw effect sizes, the push-up group built over three times as much muscle as the bench press group did (4% vs. 1.2%). Considering this was just a four-week study in already intermediate lifters, total muscle growth is expectedly slow indicating that the results were simply underpowered.

Had the study continued longer with more participants, the gap would've got closer, but the push-up group likely would've made statistically better gains.

But enough about statistics. The big takeaway is push-up variations (even ones without weight) are, at worst equivalent to the bench press and, at best, superior.

After all, the push-up is a closed-chain version with more range of motion while allowing for the shoulder blades to move freely, all of which make an exercise enticingly favorable (3). Also, the push-up is less fatiguing, so in practice it allows you to do more volume.

Oh, and it's definitely worth mentioning that push-ups are much less injurious. I mean, how many people do you know that hurt themselves doing push-ups compared to barbell benching?

Remember, for push-ups to be effective, they have to be challenging, but that's not an issue for most people.

Even the most hardcore of bros can't do 4 sets of 30 strict push-ups with a consistently controlled eccentric/negative. Start there, especially if you're a push-up skeptic.

However, if you're truly a beast, you can do one or more of the following to up your push-up game. 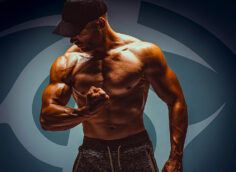 Has anyone out there tried "The One-Day Arm Cure" by Charles Poliquin? Or am I the only nut who spent an entire day devoted to training arms?
Training
George A Baselice February 8

Use the test here to find out how low you can go and how wide or narrow your feet should be.
Tips, Training
Lee Boyce May 30