Create a "shoulder shelf" for the bar and keep the elbows forward. This can be tough for lifters with longer arms, poor flexibility, or a lot of upper body muscle mass. If your goal is to get good at the Olympic lifts however, this is the grip to use.

The bar is placed on the front delts and the arms are crossed to hold it in place. This isn't the best choice because as fatigue sets in, the upper back can become rounded. It can also be unstable.

This is my preferred method. It's just as strong, if not stronger, than the clean grip because you can use your upper body to pull up on the bar. It's much more stable than the crossed-arms grip and can be used by big lifters, long-armed lifters, and those with poor flexibility or previous injuries. It's also much less stressful on the elbows. 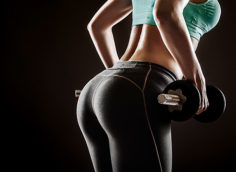 All you need is a band and the ability withstand excruciating pain. Here's how to do it.
Tips, Training
Paul Carter January 22

A summary of Coach Poliquin’s best stuff, from sets and reps to the best exercise choices for your goals.
Bodybuilding, Powerlifting & Strength, Training
T Nation March 4