As a member of the Special Operations Force, I've carried
boulders under water, walked a mile with a barbell pressed over my
head, and thrown more sand bags than Katrina relief volunteers.
I've also gotten in the best shape of my life by using the
methods I'm about to describe. After reading this article, you
can too. Minus the military commitment, of
course.

Take a moment to step back and honestly assess where you are
with your training. Have you walked away from your recent sessions
satisfied and confident that you had done what was needed, or have
you just been going through the motions?

Have you even been to the gym in the last week? Be
honest.

The human brain is an incredible machine for generating
rationalizations. People will always come up with a decent
"because" and allow themselves to feel comfortable when
they do something they're not proud of. (That's why you
felt okay waking up next to Rosie O'Donnell's body double
the morning after your birthday.)

So the reason you skipped your front squats and "just went
for a run" has nothing to do with the fact that your gym
doesn't have a decent squat rack, or that the rush-hour
traffic was too heavy. You were probably just being a pussy.

The fact is, most people use excuses to not train hard. But
really, I don't blame them; the typical gym rat's
training program is less than inspiring.

That is all about to change. But to shift your training to get
rid of the junk, we first need to change your attitude and get rid
of the excuses.

In my six years with the Navy's elite Special Warfare
Combatant-craft Crewman unit – SWCC – I spent a lot of time overseas in Third World countries.
Eventually, I was in charge of training my fellow crewmen. The
unique experience of being immersed in the world of unconventional
warfare led to an equally unconventional training philosophy.

A primary tenet of this philosophy is that the objective, be it
a successfully completed operation or the ability to crush the
standards on a physical screening test, comes first. The goal is to
be attained by any means necessary; the exact means are irrelevant
as long as they produce results.

If you read T-Nation regularly, I think it's safe to say
you have a concept somewhere in your mind – no matter how
loosely defined – of how you want your body to look, feel,
and perform. How much closer to this goal would you be if every one
of your past workouts had been of appropriate intensity? If, in
other words, you hadn't wussed out?

The countless bullshit reasons behind second-rate training
sessions aren't worth listing. Instead, I want to focus on
just one: equipment. As in, "I don't have the right
equipment for this workout."

In my world, the equipment is always there. You just have to
teach yourself to recognize it. If you see something you can lift,
push, pull, or throw, you can build a workout around it.

Some of the "gyms" I've used were considered
well-equipped if they had an Olympic bar and a few plates sitting
in a pile somewhere. Sometimes it would be a few dumbbells. It
might be some dubious, homemade equipment, or it might be nothing
but some heavy rocks, an old tire, and a few sandbags full of
gravel.

I won't say it was easy to learn how to train in these
conditions. I grew up using traditional American gyms. And with
SWCC I not only had to create a program for myself with almost
nothing to work with, I had to figure out how to train an entire
group of guys with a variety of needs.

So I learned to focus on the goal, rather than the gear, and got
creative with what was immediately available. As you'll see in
the following examples, you really don't need much equipment
for a great workout.

While on deployments, our physical goals were simple: We needed
to maintain a high strength-to-weight ratio, combined with the
ability to Just. Keep. Going.

As soon as we arrived at a new location, we'd survey the
available equipment and design a workout utilizing it. For example,
a filthy industrial location looked like a good spot to hang rings,
so we spent some time developing coordination and upper-body
strength. 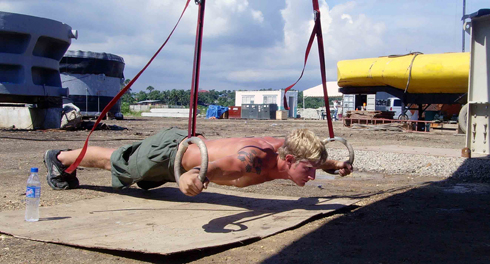 In just wouldn't feel right in a non-filthy
location.

If all we had were sandbags and rocks, we'd design a
program with weighted sprints and body-weight exercises, throwing
in some underwater rock running for good measure.

I carried a couple of little green notebooks with me everywhere
I went, and remembered to scribble down most of the workouts we
created. (Some, though, were documented on a wall with a piece of
chalk, and those stayed behind.) The two I've included here
were among my favorites.

The first one gives you a taste of the way we used whatever
equipment we had on hand. The second is a full program you can do
in your local gym.

Originally, the entire workout was performed barefoot on either
the beach or a strip of grass nearby. You should do the same. Rest
intervals are determined by how long your buddy takes to do his
sprint. If you don't have a training partner, use a 1:1
work-to-rest ratio.

Overhead: Grab a heavy sand bag and step into a split stance.
Hold the bag overhead and then throw it as far as possible, using
your legs to generate force. Sprint to the bag and repeat until
you've covered 100 yards. Alternate sides on each throw (left
leg forward, then right leg forward, etc.).

Underhand: Grab the bag and throw it underhand from between your
knees, like a kettlebell swing. Maintain a neutral spine and
generate force from the hips. Sprint to it and repeat for 100
yards.

Rotational: Throw the bag across the body, from right hip to
left shoulder, then left hip to right shoulder. Utilize strong hip
rotation and maintain tightly braced abs. Go for 100 yards,
alternating sides on each throw.

Clean and press a large rock (or log, or box of tools, or
whatever you have sitting around). Walk with the stone overhead for
50 yards, then drop it and sprint the final 50 yards.

Our boats would be anchored about 100 yards off the beach, in
around 18 feet of water. We generally used these as the markers,
but the workout can be performed just as easily if you run parallel
to a beach. You can also use the deep end of a pool. (Just check
with the lifeguards first so you don't cause an incident.)

Each two-man team picks a large rock and races to the boat with
it. The first man carries the rock while the second man swims above
him on the surface. Then they switch. Once they reach the boat, a
mooring line is dropped in the water and the rock must be carried
up the line onto the deck of the boat. From here, knock out 50
pushups, throw the rock back into the water (check for swimmers
first), and return it to the beach.

The "Confined to a Gym"
Program 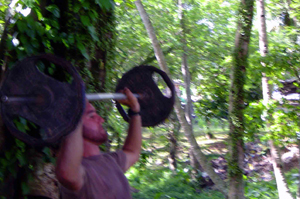 How did a loaded barbell end up in the woods?
Don't ask, don't tell.

After warming up, do one snatch, rest 60 seconds, one muscle-up,
rest, one power clean, and rest. Repeat until you've completed
10 to15 circuits of the three exercises.

First you'll need a bar that's high enough that your
feet don't touch the ground. Grab the bar overhand, and from a
dead hang pull yourself up to the bar as explosively as possible.
Rather than smashing the bar into your sternum, you want to rotate
your elbows over the bar as it approaches your chest. As soon as
you can get your weight over the bar, straighten your arms and
press yourself the rest of the way up, as if you were doing a dip.
Finish with the bar at your hips.

You'll almost certainly need a certain amount of body
English to pull this off, probably by swinging your legs to
generate momentum. Developing the right timing and coordination
will take a while, so don't get discouraged.

Load an Olympic bar with a weight you're pretty sure you
can push press for eight reps. My guys eventually worked up to
about 75 percent of our body weight, but you'll probably have
to go lighter at first.

The goal here is to do the entire combination without taking
your hands off the bar. Clean the weight, then immediately do a
front squat, and then as you finish the squat use your momentum to
press it overhead. Lower the weight to your shoulders, as you would
for a back squat, and do a lunge with each leg.

Now press the weight back up over your head, lower it to the
floor, and repeat four more times. 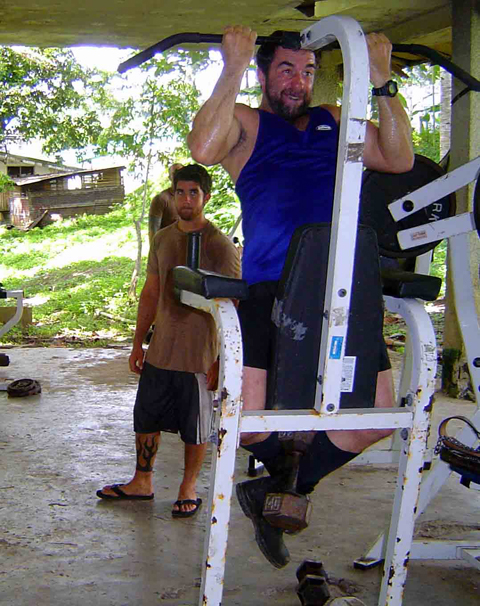 A good substitute for pulling yourself up and over an
enemy's rooftop.

Reps: as many as possible
Duration: 15 minutes
Rest: 5 minutes

Reps: as many as possible
Duration: 15 minutes

After finishing the B exercises, you're done for the day.
No need to repeat this one.

Here's the simplest workout in the program: Load a barbell
with between 50 percent and 100 percent of your body weight, and
carry it around. Vary the bar position from a back squat to a front
squat to overhead. That's it.

We went as far as one mile, but you'll probably want to
start off slow. Alternate with a buddy and do sections of a hundred
yards or so. If this is inconvenient with a barbell, just throw
your buddy up onto your shoulders and carry him, fireman-style.
(Don't try to get him into the overhead press position,
though. Nothing good can come of that.)

After three weeks, do the same workouts, but unload by cutting
your volume in half. Use the extra time for mobility, flexibility,
and foam-roller work.

It may not be pretty, and it certainly won't be
comfortable, but the Third World Workouts can cure what ails
ya.

By stripping away the excess, embracing the unconventional, and
working your ass off with no excuses, you can get leaner, stronger,
and better fit for duty, whatever that duty may be. And you sure
don't have to worry about boredom.

You may find you never return to "first world"
workouts again. 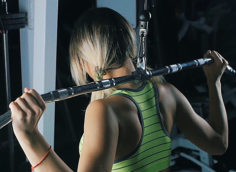 Are behind-the-neck pulldowns really the devil? Well, not quite. Here's why.
Back, Bodybuilding, Tips, Training
Nick Tumminello June 24