No exercise for triceps blasts the long head harder than this one. There isn’t even a comparison.

You can do all the close-grip bench presses and dips in the world, but neither of them put the long head in a fully lengthened state. And whatever muscle is loaded the most in a stretched position is the one that’s going to have the greatest amount of tension distribution.

This is why, when someone tells me this version of the pullover is a lat movement, I know they simply don’t understand how to execute it properly. Here’s how to make it hit the triceps:

This differs from a lat-specific pullover where the elbows tend to stay in “soft flexion” or even remain completely straight (again to emphasize lengthening the lats primarily) and remain in that position.

With this pullover variation the elbows go into flexion, then extension emphasizing the triceps more than the lats. – Paul Carter

A variation of the pushdown.

Don’t be fooled by its simplicity. It’ll make a huge impact. The first point to stress is that this exercise works best as the last exercise in your triceps training routine.

Tricep pushdowns are one of the best exercises for building the back of the arm. EMG tests show that rope pushdowns are effective in both peak and mean score readings. Researchers have found that cable push-downs actually activated the lateral head of the triceps greater than skull crushers or kickbacks.

This method was made popular by Mel Siff in Super Training and Louie Simmons of Westside Barbell. It highlights the use of moving small weight for a large amount of reps. This method has been proven time and time again with powerlifters across the nation. Don’t believe me, take a look at the people who train under Louie Simmons like Dave Hoff who bench presses over 1000 pounds.

This method is intended to be used during accessory movements, specifically the ones immediately following your main exercise. It’s unique because it builds strength, endurance/lactic threshold, and promotes growth hormone production. The following exercises are ways you can incorporate this method into your training regimen.

This is the most brutal tricep exercise available. Anyone willing to try this out with a couple of friends will see growth, guaranteed.

How to do it: Lie down like you’re attempting to do a regular bench press. Have a friend place a 2-board on your chest, then do 5 reps. Without racking the bar, he’ll quickly switch to a 3-board, and you’ll do another 5 reps. This will go on until you get to the 5-board where you’ll perform as many reps as possible.

You can use this method immediately after your last heavy bench or at the end of the workout as a finisher. The purpose of the boards is to limit your range of motion substantially and eliminate any input from the pecs. This allows you to primarily work your triceps.

How to do it: Lie down like you’re getting ready to do a regular bench press. Have a friend place either a 3, 4, or 5-board on your chest. Lower the bar to the board and press back up. Repeat this for either time (no less than 30 seconds) or max reps (no less than 20 reps). If you’re doing multiple sets, you can also alternate your grip from close grip to wide grip.

As an alternative you can also use a Bench Block. This allows you to choose from any of the board ranges listed.

This is the most popular variation because it’s simple and you can do these anywhere with dumbbells, kettlebells, or fat bells.

How to perform it: Lie on your back on the floor. Your feet can either be flat on the floor or legs can be extended straight out. Now just go through the movement as you would on the dumbbell bench press. Be sure to control the movement and let the elbows tap the floor. Don’t slam them because it’ll cause more damage than benefits. You can either go for time (no less than 30 seconds) or reps (aim for greater than 30). – CJ McFarland

Make volume and tempo a priority over load. Why? Because you’ll get better results. The biggest mistake people make training triceps is simply going so heavy that they’re not able to use enough time under tension to elicit any growth. – Kurt Weber

Getting strong on heavy compound presses is undoubtedly one of the best ways to develop your triceps. However, most lifters need a bit extra to maximize their growth potential. That’s why I recommend adding these three exercises into your training routine once every 5-10 days:

If you really want to maximize growth, try adding accommodating resistance (chains or bands) to overload the top half of the movement which is the phase that emphasizes the triceps. Avoid an excessively narrow grip because it can place undue stress on the wrists and also cause the elbows to flare out, minimizing stress to the triceps. Instead use a grip that’s just inside shoulder width as demonstrated by several of my NFL athletes including Larry Pinkard and Adrian Hubbard.

Use 2-6 reps for this first strength exercise to help target the highest threshold motor units and maximize mechanical tension. This not only optimizes the growth response in the fast twitch muscles, which have the most potential for growth, but also provides a neural potentiation effect making all subsequent isolation exercises feel lighter.

Next, move onto a tricep extension exercise like skull crushers, overhead extensions, JM presses, or lying extensions. These help isolate the long head of the triceps and also emphasize the stretched position, which triggers muscle damage. If I had to recommend one extension exercise that’s both joint friendly, yet absolutely brutal on the triceps, it’s decline kettlebell skull crushers with an eccentric emphasis.

The combo of the decline position along with the kettlebells places constant tension on the triceps, something most extension exercises don’t provide. And it tends to be much easier on the elbows. Several sets of 6-10 reps will be perfect for accumulating significant time under tension while also maximizing micro-trauma and muscle damage.

To finish the workout, do some type of constant tension exercise that also targets the contracted position. This includes most variations of tricep cable pushdowns/pressdowns including rope variations, reverse grip, single arm, and kneeling versions.

Do 2-3 sets with either slower tempos and moderate rep ranges (8-12), or more traditional tempos with higher reps (15-25). On your final set, once you reach failure, perform a drop set reducing the weight by half and blast out as many reps as possible. Expect significant metabolic stress and cellular swelling as well as enormous levels of blood flow for one massive pump. Yes, the pain will be almost unbearable, but the growth will be worth it.

As a side tip, be sure to superset each movement with your favorite bicep exercise. This not only supercharges the cellular volumization and muscle pump effect but it allows heavier loads to be used throughout the workout. That’s because fatiguing the antagonist muscles produces reciprocal inhibition. This allows greater force production of the agonists thereby maximizing overload and muscle growth. – Joel Seedman, PhD

Pay attention to the three P’s. 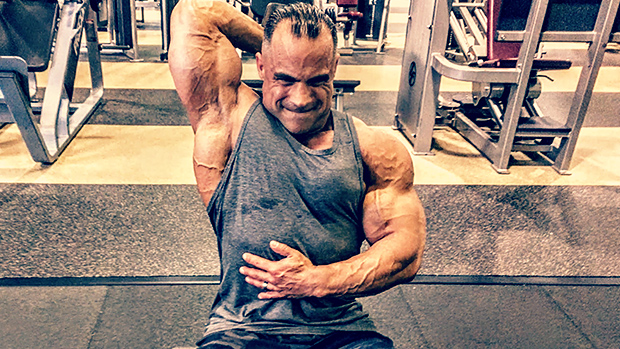 Most guys want big arms, and triceps make up the bulk of their circumference. Various aspects impact the speed in which your triceps can grow:

Unlike biceps where the pump is more important than the pounds lifted, triceps need both. However, before you slap another plate on the bar for skull crushers, don’t lose sight of the fact that heavy pressing movements for chest and shoulders invariably work the triceps. As such, the bulk of my “heavy” lifting for triceps is taken care of through chest training, not tricep-specific exercises.

Yes, triceps respond extremely well to a fascia splitting pump, which is best achieved via extended, giant, and drop sets. A great giant set example is: tricep pushdowns; followed by dips between benches; followed by close-grip push-ups. An extended set that I’m loving lately includes single handle pushdowns going from a supinate to pronate grip. Here’s what that looks like:

Nothing halts triceps progress like inflamed elbow joints, which is why the order of your exercises is so important. I prefer doing tricep work immediately after chest and/or shoulder training.

Training triceps after heavy pressing movements ensures your elbow joint is warmed up and includes the added benefit of forcing you to lift lighter on triceps specific exercise – an extra safety feature. Lastly, on the programming front always finish triceps with a stretch-focused exercise. I see quicker growth when a fatigued and massively pumped muscle is stretched. Think overhead extensions. – Mark Dugdale

I’ve always had decent triceps, especially relative to my biceps. The main reason? I’ve always used a lot of frequency for my triceps. 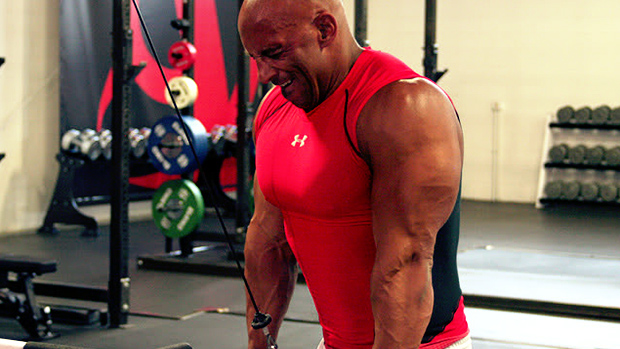 When I was a teen, I read that the secret to getting big arms was having big triceps since they “represent two-thirds of your arm mass.” And while that isn’t exactly correct, it really stuck with me. So I did at least twice as much work for triceps as I did for biceps, hitting them at least 3-4 days a week.

There were two times when my triceps were at their biggest. The first time was when I first tried Westside Barbell training, which emphasizes triceps training. I read an article by Louie Simmons about extra workouts. He talked about how using mini workouts every day and even several times a day could boost your results.

So for several months I’d do sets of band tricep pressdowns every day, a few times a day. I didn’t follow a specific sets/rep pattern, but instead just did a lot of band pressdowns throughout the day, focusing on getting a strong contraction and a pump. My triceps grew a ton.

The second time was when I specialized on the bench press and would do a form of bench pressing pretty much every day. It too made my triceps really thick and dense.

So if you want rapid tricep growth, train them frequently with low stress exercises (triceps pressdowns), focusing on getting a nasty pump and contraction (using moderate or light weights) and then stopping. Band pressdowns are great for that purpose and can be done daily, even several times a day, at home or anywhere really. – Christian Thibaudeau

It’s all about the tension. 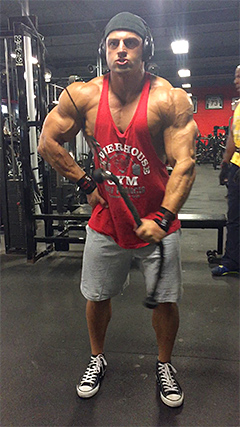 Over the years my quest for bigger and more dense triceps has lead me to the conclusion that it’s not necessarily the exercise that makes the biggest difference, but the tension you place on the muscle. I believe this to be true with all muscles, but even more so for the triceps.

The size and density will come with controlled and heavy skull crushers, close-grip bench presses, and heavy dumbbell kickbacks. You don’t see many people doing dumbbell kickbacks heavy. It’s always an exercise people either skip or go light with. But over the years I’ve built up to 70-pound dumbbells, while maintaining strict form and no swing.

Another great exercise that places a lot of tension on the long head of the tricep is the one-arm cable pushdown.

Turn your body sideways, get your shoulders back, and use strict form. – Arash Rahbar