This article will examine the use of the trap bar deadlift, not only as a means of working around injury, but as a stand-alone exercise whose benefits may surpass that of the traditional straight bar deadlift.

Of all the bizarre looking pieces of equipment that inhabit the weight-room floor, none draw as many confused looks from new clients as the trap bar. The sometimes hexagonal, sometimes diamond-shaped bar has been described as a cross between a car chassis and a tenth-grade geometry problem.

But despite the awkward appearance, the trap bar (also known as a Hex Bar) might just be the greatest innovation in strength-training equipment in the last thirty years.

The trap bar deadlift was developed originally patented in 1985 by a powerlifting aficionado named Al Gerard, who was trying to find a way to train around a recurring lower back injury. It has since gained widespread support among many coaches as a back-friendly alternative to both traditional straight-bar deadlifts and squats.

As others have pointed out, the biggest drawback of both the straight bar deadlift and the barbell back squat is the amount of harmful stress it puts on the lumbar spine. Both exercises require the weight to be some distance away from the axis of rotation where the work is being performed (i.e., the hip), thus relying on the back to act like a crowbar to move the weight.

As a result, your training weights are limited to the capabilities of your back extensors to resist flexion as much, if not more, than your legs' ability to produce maximum force. And as you might expect, when things don't go strictly according to plan, it's your spine that's stuck paying the bill.

Since the trap bar deadlift configuration allows you to step inside it rather than behind it, the long lever is shortened along a horizontal axis, thus significantly reducing the amount of sheer force on the spine.

Here's where the Swinton study gets interesting. Not only was the trap bar deadlift a safer exercise than the straight bar version, it was also a more effective exercise for building maximum power.

According to the authors, significantly greater levels of peak force, velocity, and power were produced with the trap bar deadlift compared to the straight bar version across a range of submaximal loads. Since power is a measure of an object's force times its velocity, this means the hex deadlift allows you to lift more weight, over a greater distance, faster.

The authors go on to explain that the peak power values measured with the trap bar deadlift were on par with those captured in other studies that looked at Olympic weightlifting exercises like the power clean. This, of course, is a critical piece of information for coaches looking for a high-benefit, low-cost (in both time and potential for injury) exercise for increasing maximum power.

Why is this the first time we're seeing such high power outputs with a deadlift?

Simple – we've always measured these quantities with a straight barbell. And unless you've completely abandoned all prospects of having children in the future, chances are you spent as much time decelerating the bar as it sped its way toward your nether regions, as you did accelerating it off the ground.

This is obviously a lot less of a problem with the trap bar deadlift. Since there is no pelvis-cracking impact at the top of the movement, there's no reason to start pumping the breaks early.

Most beginner-level trainees deadlift with about the same level of skill that a chef at the Olive Garden prepares authentic northern Italian cuisine, which is to say, not very much at all.

For the majority of the population, getting into a good deadlift position with a straight bar is a huge challenge requiring a lot of upfront coaching and a generous helping of mobility work. This is especially true among the desk-jockey demographic who spend eight hours a day practicing lumbar flexion and posterior pelvic tilt.

Sure, there's that occasional outlier who comes walking into the gym – back arched, abdominals braced, shoulder blades retracted, looking for something heavy to lift off the floor with perfect form – but these people are rare.

That's where the trap bar deadlift comes in so handy. Its configuration leads to a much more upright torso position, allowing you to "sit" into the movement with far fewer technical requirements than a traditional straight bar deadlift. It also allows the knees to move more forward and the hips to sit lower than normal, avoiding the bar scraping your shins at the bottom of the movement.

To setup for the trap bar deadlift, first step inside the perimeter of the bar, making sure your feet are positioned equidistant between the front and back of the bar.

Grip the handles tightly on either side so that your middle finger is in horizontal alignment with the front of your shin, while rotating the insides of your elbows forward. This will help to pick up any slack at the shoulder capsule.

Squat your hips down with an arch in your back.

Once in position, stand up by driving your feet into the ground, straightening your legs, and thrusting your hips forward. As you approach the top of the movement, squeeze your glutes together and brace your abdominals to finish the movement.

Your ability to achieve maximal force and acceleration during a lift is in large part limited by the need to decelerate the weight at the end of the movement. That's why Olympic lifts, plyometric jumps, and medicine ball drills are all so effective at increasing power – they're all gas, no brakes – and why traditional resistance training exercises are good for building strength, but not that great for increasing power.

While the trap bar goes a long way toward fixing the problem of deceleration, it still requires some deceleration as you reach the top. About thirteen percent of the total range of motion is devoted to it, which might not be a huge leak, but a leak nonetheless.

That's where the use of resistance bands comes in handy, as they force you to work as close to maximum power output as possible throughout the range of motion.

Simply loop a stretch band around both ends of the trap bar and anchor it to either side of the bottom of a squat rack or a pair of heavy dumbbells. As you approach the top of the movement, the increasing pull of the band will do the deceleration for you so you can focus on increasing terminal velocity throughout.

For decades lifters have used plyometrics as a part of their lower body training programs, with one exception. Unlike the squat, lunge, step-up, and running stride, the biomechanics of the deadlift don't lend themselves easily to plyometric modifications (at least not without a good pair of shin pads and a heavy supply of topical ointments).

The trap bar deadlift changes this equation, allowing you to take advantage of both the elastic component of your muscles, as well as the stretch-shortening cycle that defines plyometric training.

These are an advanced version of the exercise that should only be attempted after mastering the feet-on-the-ground trap bar dead. Limit yourself to 3-6 reps, and try to use rubber plates on the bar rather than metal ones for a better rebound.

One criticism of the trap bar is that the handles on most bars are too high off the ground. This might be a blessing if you're lacking in the mobility department, but can be something of a liability if maximal muscular activation is your priority. The good news is that it's easily fixed.

Simply place a 1-3 inch step (or Olympic plate) under your feet before the lift to get a lower start on the weight. Make sure to take a slightly wider than normal stance so your hips have plenty of room to drop into the movement. Resist the urge to cheat the bottom range of motion by flexing the lumbar spine and curling your shoulders forward.

Should you abandon the straight bar deadlift altogether?

It depends on the goal. If you're concerned about the risk of lower back injury, the trap bar is definitely the safer choice. However, if you're trying to achieve maximum back extensor and hamstring recruitment, then the straight bar is the better option.

Keep in mind that the hamstring's primary role will always be to bend your knee and extend your hip when you're bent forward. While this does occur during the trap bar deadlift, it's to a lesser degree than during the straight bar version, which keeps most of the load on the hip joint, rather than the knee and ankle joints.

Where does the trap bar deadlift fit in my program?

Another great thing about the trap bar dead is its versatility. Here are a few of the ways I have used it in my programming:

The important thing to remember is that if you're going to truly "replace" the traditional deadlift, plan on adding a bunch of other hip-dominant exercises like glute/ham raises, kettlebell swings, hip thrusts, etc., to your program.

The Trap Bar Deadlift Is Here to Stay

Whether you're a beginner, a seasoned veteran, someone trying to train around an injury, or just hoping to corner the market on being able to lift a crap-ton of weight, the trap bar deadlift may be for you.

While last year might have been the year for single-leg training, this year, the trap bar deadlift is the new black. You heard it here first. 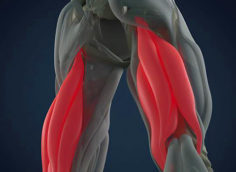 Build and strengthen your posterior chain AND save your back with this exercise.
Deadlift, Tips, Training
Dr John Rusin July 5

Now we know exactly how much time we can take off between training and a strength competition. Check out the new science.
Bodybuilding, Powerlifting & Strength, Tips, Training
TC Luoma February 12 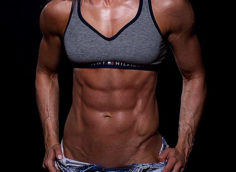 Research figures out what's been missing from your ab workouts. Here's how to make those shy buggers push through and show themselves.
Abs, Tips, Training
TC Luoma December 21