For some reason unbeknownst to me or probably anyone else (with the possible exception of those TV psychics who, for a small fee, will tell you that your wife is cheating on you with the butcher, the baker, and the candlestick maker), back training is an enigma. Given the form that I see most trainees use in the gym, it's a wonder that any of them can start a lawnmower without throwing their entire lumbar spine out of alignment.

I'm equally puzzled by most of the exercises performed by the majority of trainees. If they were enrolled in a mime class, they would no doubt get high grades for their impression of a man lifting a fat woman out of mud puddle. I, however, would give them a failing grade for their workout technique.

It doesn't have to be difficult, though. Take the following exercises, for instance. In my estimation, they are the top seven upper back exercises that should make up the core of your upper back training. They are the exercises that give you the most bang for your training buck.

Without further ado, here they are:

This variation of the chin-up, which was popularized by Vince Gironda, involves leaning back throughout the entire movement. In this variation, the lower portion of the chest should touch the bar.

You can use either a supinated or pronated grip, and the grip can vary from narrow to shoulder-width (the latter being more indicated for the stronger trainee).

If you've never seen anyone do it before, that's because it's damn hard. I consider this movement the king of compound movements for the upper back because it works more than just the lats. It also creates a great overload on the scapulae retractors.

The beginning of the movement, however, is more like a classical chin, while the midrange resembles a pullover motion. Finally, the end position duplicates the finishing motion of a rowing movement.

If you're an advanced trainee pressed for time, I would make the sternum chin-up a staple of your back routine. If you're particularly strong and you still find it easy, you may want to slow your concentric tempo. One of my female assistants – Josée Tremblay from Montreal – can do them using a 5050 tempo (that's five seconds on the way down and five seconds on the way up). Who ever said that women can't do chins?

This variation of the chin-up provides most people with a strong mechanical advantage, as the semi-supinated grip is the strongest elbow flexion grip. Therefore, you can probably lift the most load in this particular variation. Many gyms are equipped with V-handle chin-up stations that are set 6-8 inches apart, and this is just about perfect.

Focus on bringing your lower sternum to the handles as you pull yourself up. In other words, lean back as you near the top of the concentric range.

Since the grip is narrow, the inferior fibers of the latissimus are hugely recruited. These fibers have been shown to have a higher fast-twitch make-up than the superior fibers and, therefore, they should be trained using lower reps.

In this variation of the pull-up, assume the starting position of the wide-grip pull-up and pull yourself to the bar until the upper pecs make contact with the chin-up bar.

So far, so good – just like normal. However, once you get to the top of the range of motion, push yourself away from the bar, and lower yourself under control.

Believe me, your subscapularis muscles will curse you for the next three days because they're strongly activated as you attempt to control the descent. I often prescribe these to athletes who overuse variations of power snatch exercises. This movement will, in the long run, help provide some structural balance.

Most people will agree that the vast majority of trainees devote far more time to chest work than they do back work. As a result, they start to look like Neanderthals. Seated cable rows to the neck will help balance the equation.

Set the adjustable pulley so that it's directly in front of your pecs. Use a rope – it will reduce the stress on your forearms and wrists and allow you to concentrate on the task at hand (which is upper back work, just in case you forgot).

Make sure to eliminate the lower back from the equation by keeping it perpendicular to the floor at all times. If the development of your rhomboids is lacking, you may choose to pause for a moment when the shoulder blades are retracted.

I find this one particularly good in overcoming sticking points in strength development for the lats. For this exercise, I like to use one of those assisted chin/dip units like the ones made by Cybex Eagle or Atlantis.

Depending on the brand of machine that you use, you may be supported at the knees or the feet. For the purposes of this exercise, it matters little which one you use. Pull up with two arms, pause, and slowly transfer the load to your non-dominant arm.

From this point, lower yourself under control until the lats and elbow flexors of the working arm are fully stretched. Reset your dominant hand on the handle and pull yourself up for another repetition, and repeat the process until you reach eccentric muscle failure.

Initially, I recommend that you use very slow eccentric lowering, as in 8-10 seconds per rep. If you're unable to go down that slowly, you've achieved eccentric muscle failure. The stronger you get on this exercise, the lighter you're going to make the weight stack that's assisting you through the concentric range. I hope, however, that this last fact doesn't come as any shocking revelation to any of you out there.

For this exercise, I prefer to prescribe at least six sets of two to four repetitions per set.

Warning: If you experience shoulder discomfort at the bottom of the range of motion (the hanging position), it's a warning sign that you may have less than optimal shoulder mechanics. You may want to consult a shoulder specialist that can evaluate and correct your shoulder mechanics.

In arc dumbbell rowing, because of the rearward trajectory used, the lat performs more of a shoulder extension movement. Of course, the weight will have to be drastically reduced, sometimes by two thirds.

Remember, though, that the elbow should come up as high "over" the hip as possible. Range of motion, particularly in this movement, is crucial.

As far as the standard version goes, I find that people use far too much weight, which is clearly shown by the tendency of most trainees to either bounce the dumbbell off the mat or bring the upper body down to meet the dumbbell.

For those of you who aren't familiar with Strive, it's a brand of equipment that allows you to overload the range of motion in three different segments and, thus, match the strength curve of a typical human. The way the handles are designed on this machine removes almost all of the stress on the elbows, forearms, and wrists.

One method of training that's particularly effective is to do 6-8 reps on the Strive machine with a pronated grip, keeping the upper arms parallel to the ground.

Once concentric failure is reached, the athlete is then instructed to immediately switch to a semi-supinated grip and go to muscle failure by doing another 6-8 reps.

Of course, other brands of seated rowing machines are also superior to the standard fare found in most gyms. I like the bilateral machine made by Magnum, and the Flex machine also has sound biomechanics.

You might realize, after reading this article, that I'm particularly partial to chin-up and pull-up movements. That's true. In fact, I think that most athletes could build an impressive upper back by using the chin station alone.

Regardless of which of these particular movements you decide to adopt – and I hope you adopt all of them – I think you'll find that they're far more effective than the usual movements.

At least, that's what the psychic hotline told me.

Do one of these extremely high-volume finishers every fourth day and you won't need to do any additional biceps or triceps training. Get the workouts here.
Arms, Bodybuilding, Training
Scott Thom July 22 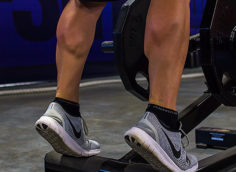 Still doing the same two exercises for calves? How's that working? Get results by adding these moves to your plan.
Training
Nick Tumminello October 3 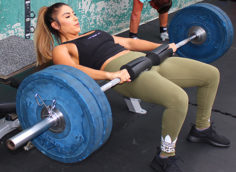