Tapping into the right movement can radically change your body.

It's the loaded carry.

The loaded carry does more to expand athletic qualities than any other single thing I've attempted in my career as a coach and athlete. And I do not say that lightly.

A few years ago, I worked with an athlete named Ted. Now, Ted's issue was interesting: He was a solid powerlifter and very good at the two Olympic lifts, the snatch and the clean and jerk. In other words, he wasn't a wannabe, a beginner, a neophyte, or an Internet warrior. Ted was the real deal.

When he came to visit with me for a week, there wasn't a ton of stuff I could help him with in the weight room. A pointer here and there and I was finished. So, being finished, we went outside for a "finisher."

"Would you rather do carries, walks, or sleds?" I asked.
"I've never done any of those things," Ted said.

Good, I thought. I can help.

Within seconds of his first attempt with the farmer bars weighing 105 pounds apiece, he was a stumbling drunk. He could pull hundreds of pounds off the floor, but didn't have the stability – the cross strength – to handle more than a few feet with the bars.

Next I tried to get him to walk holding a 150-pound bag to his chest. He gasped for breath and nearly choked to death. Literally, his human "inner tube" had almost no range past five seconds.

A few weeks later, I get the call: "Dan, you're a genius! My deadlift has gone up (low 500s to high 500s) and I'm just thicker all over!" Ted tells me. Humbled coach blushes, but nods knowingly.

I'm not surprised. Again, in my coaching toolbox, nothing has been a game changer like loaded carries. So, are you ready to learn how to do a few variations? Good. Let's do it.

These are the simplest and most recognized: grab a dumbbell or kettlebell and walk away.

The weight is held with a straight arm overhead like a European waiter in a café. This is usually the lightest of the carries and does wonders for shoulders.

Grab the weight in one hand like a suitcase and walk. The obliques on the other side of the weight will want to have a discussion with you the next day.

Usually done with kettlebells, hold the 'bell in the racked position, which is the weight on the chest, like a clean. This is a fairly remedial move but it can teach an athlete about how the abs work. 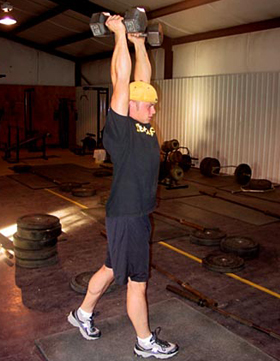 This is simply a double waiter's walk but the weights come alive as you move. Warning: Do not do this to failure. It looks dangerous because, well, it is dangerous.

Same as above but with two kettlebells. Again, a learning move, but it's a great way to teach the athlete to breath under stress.

Waiter's walk in one hand while doing the farmers walk in the other. It's a very interesting way to teach the athlete to lock down the midsection during movement.

Go to any grocery store and buy either water softener salt or salt for de-icing. For about five to ten dollars, you can get 150 pounds of salt. Sand works better in many situations. Get whatever is cheap.

The basic bag carries are simple. It comes down to either "backpacking," holding the weight over the shoulders like a squat bar, or bear-hugging it. The backpack or vest setup is ideal as it leaves your hands free.

Bear hugging is a great training tool as the weight is not unlike Zercher squats: the internal pressure is building, the breath is choked off by the weight on the chest, and squeezing it hard in order to hold it is adding to all the problems. All in all, just nothing but fun.

I also include sleds, pushing cars, going up hills (forward and backward), and all the various new pushing devices available in good gyms these days.

It's simple: Hook up a sled either with a harness or weight belt and tow away!

Each of these moves works well alone. But here's the "secret" to taking loaded carries over the top: combine them.

Hook yourself up to a dragging sled. Then don a 150-pound backpack. Now pick up farmers walk implements weighing 150 each. That's one of the most difficult things I've done in my life. You try it.

Obviously, some combinations don't work as well as others. Cross walks and overhead walks of any kind are usually epic failures when combined with something else. Fun to watch though.

I have high school sophomores use 85 pounds per hand in the farmer bars and we have more advanced athletes work up to 155 pounds per hand. I've done more in competition and wouldn't suggest you do it... yet. So, whatever you have at hand is going to be a good start.

A bag of salt or sand weighing 50 pounds is an amazing eye-opener. I also recommend going to a warehouse home supply place and getting a wheelbarrow shell (just that green part that holds stuff), string a rope through it and connect it to your weight belt. For weights, I started out with just cement that had been thrown out and a bunch of rocks.

So, with two dumbbells or kettlebells, a wheelbarrow shell, a weight belt, a backpack, some sand and some rocks, you can train at the top end of the food chain.

How far? How many? How long? Well, it depends. I usually tell people to first try every movement from waiter's walks to cross walks. Hug a bag to your chest and walk around. Don't go far and don't do much. Simply get a sense of things. Rarely do we do more than "down and back" with each move as we strive to keep adding elements each set. So:

That's eight movements down and back with minimal equipment and a lot of work. The "how far" question is usually answered with "not very." You'll find out why.

Do some kind of loaded carry three times a week, but only one of the days should be "everything." You want to be aggressive and intense when you attack these movements. Farmers walks and bear hug carries are my personal favorite moves and tend to be some of the best bang-for-the-buck choices.

Get back to me after doing these for three weeks. Obviously, your grip will be better. Your legs will be stronger. You'll discover that the weight room isn't that tough any more. You'll look leaner, but be bigger.

Now get to work.

Can you pass these tests of glute activation and strength? If not, we'll show you how to get those babies firing.
Bodybuilding, Glutes, Powerlifting & Strength, Training
Joel Seedman, PhD April 19 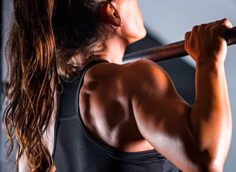 Instead of using crappy form and wrecking your elbows to get more reps, use these techniques to make the strict pull-up tougher.
Back, Pull-Up, Tips, Training
Drew Murphy November 28