When I was a pre-teen, I used to read a lot those Choose Your Own Adventure books.

Each story was written from a second person point of view, with the reader assuming the role of the main character. After an introduction to the story, the reader was given choices about how the story should progress. For instance:

If you decide to sweep the leg, turn to page 47.

If you decide to use some stupid crane kick that you learned from Pat Morita that would NEVER work in a real fight, turn to page 49.

Depending on the reader's choice, the plot would unfold in different ways and eventually lead to many different possible endings. Unfortunately, I never came across a book where the ending resulted in me either becoming an honorary member of the A-Team or getting to ride shotgun in Airwolf.

I can't help but feel that there are many people reading this article who are taking part in a real life Choose Your Own Adventure with their training. On the one hand, we have those who continue to utilize sub-maximal loads (3 x 10, 5 x 5, etc.) for every movement, and are still benching the same weight now as they did two years ago.

On the other hand, we have those who consistently incorporate lifts at or above 90% of their 1RM into their training, and understand how crucial they are in terms of getting bigger, stronger, and enhancing athletic performance.

If you're happy with the fact that you've been training for over five years and can only deadlift 275 pounds, this article isn't for you. Stop reading now and find a new hobby. Coin collecting perhaps?

If you wish to learn how and why incorporating The Rule of 90% will lead to increased strength gains, increased lean body mass, improved athletic performance, and make girls want to hang out with you, then keep reading.

When a motor neuron fires, all the fibers it serves are simultaneously activated and develop force. A motor neuron and all the muscle fibers it innervates are referred to as a motor unit, the basic functional entity of muscular activity. 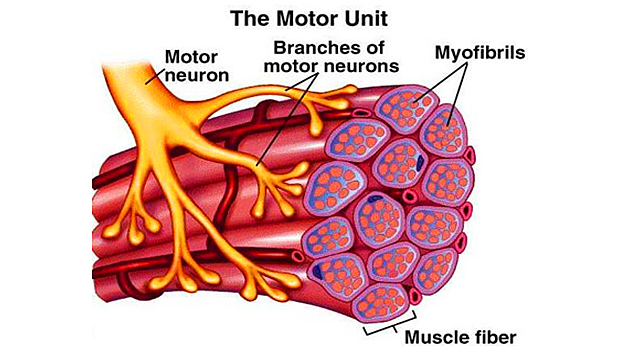 Motor units can span a range of muscle fiber sizes (Type I and Type IIa/b), which also allow different force productions. Motor units are recruited in the order of their size, from smallest (Type I) to largest (Type Iib) depending on the force they must produce.

For example, when you do light load resistance training, you're recruiting predominantly Type I (slow twitch) motor units. When the load is increased, the Type Iia (fast twitch oxidative and glycolytic fibers) will be recruited with the help of the Type I fibers. When high intensity loads are utilized (90%+), the Type IIb muscle fibers (along with Type I and Type IIa) are recruited in order to produce enough force to complete the lift.

Thus, with heavy resistance training, all the muscle fibers get bigger, because they're all recruited to produce more and more force with heavier weights. (This is assuming, of course, that you're getting sufficient volume in your training.)

In short, like Ron Burgundy, the CNS is kind of a big deal. As a matter of fact, during the early phases (two to eight weeks) of resistance training, a trainee's strength gains can be solely attributed to improved CNS development (not muscle growth). This is due to:

That's not to say there isn't any lean body mass gain during the initial stages of resistance training, but it's definitely not as profound as you may think.

Okay, How Can I Get Stronger?

In his book, Science and Practice of Strength Training, Vladmir Zatsiorsky states that there are essentially four methods to developing strength:

For the sake of this article, I'm going to focus mainly on the maximal effort method (loads at 90% or above your 1RM), because I feel that this is the one area many people tend to neglect.

Repeated Effort Method (a.k.a. What most people perform): While it's well known that muscles with a large physiological cross-sectional area produce higher forces than similar muscles with a smaller cross-section, this doesn't necessarily equate to improved strength. How can this be?

Well, for starters, you can only go so far with three sets of ten (repeated effort method). I consider it a natural progression for trainee's to start with something like three sets of ten because it establishes a foundation. It allows for initial neural adaptations (as alluded to above), strengthens connective tissue (tendons and ligaments), and also builds some lean muscle mass to boot.

More often than not, this leads to what's called sarcoplasmic hypertrophy, which is characterized by the growth of sarcoplasm and non-contractile proteins that don't directly contribute to production of force. 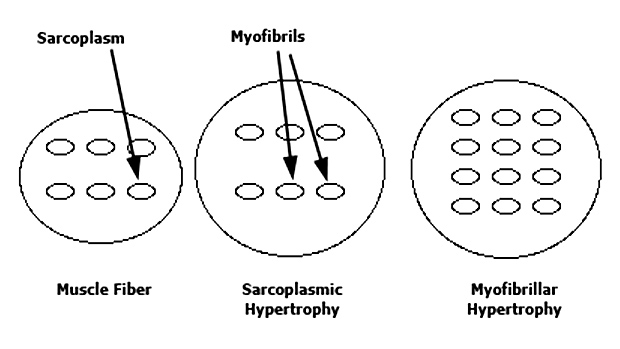 From there, most trainees will gravitate toward a 5 x 5 or possibly an 8 x 3 program (still the repeated effort method, albeit a bit more strength-training based). Again, this would be a natural progression. During this time, you're drastically improving your CNS efficiency (remember, heavier loads target higher threshold motor units), as well as improving myofibrillar hypertrophy. This form of hypertrophy is characterized by growth of the actual contractile proteins, actin and myosin.

The key point to take home is that while the repeated effort method is valuable in the grand scheme of things, it's also limited. Only the final lifts, in which a maximal number of motor units are recruited, are actually useful (from a strength standpoint).

And as my elaborate drawings above demonstrate (don't ask me how long it took to draw these), just because someone is big doesn't necessarily mean that they're strong. Yes, I'm talking to you, Mr. Quarter-Squat, bodybuilder guy.

Why You Should Lift Heavy Things

I can't stress this enough: the CNS is the key to strength gains. Muscular strength is not only determined by the quantity of muscle mass (cross-sectional area), but also by the extent to which you can improve intramuscular coordination.

Intramuscular coordination is the extent to which individual muscle fibers are voluntarily activated to produce muscle force production. There are essentially three ways to do this:

Why You Should Lift Heavy Things (Part II)

Additionally, for those only interested in aesthetics and thinking, "Tony, I only want to be jacked; I could care less about strength," consider the following:

For the next three months, you decide to get generally stronger (incorporating lifts above 90%) and happen to increase your 1RM to 275. What used to be 80% of your 1RM (180 pounds), is now 65%. When you inevitably decide to return back to a hypertrophy based program, 70%-80% of your 1RM is now 190-220 pounds! It stands to reason you'll pack on a significant amount of muscle.

Moreover, in boys and younger men with two or more years of training experience, it's been shown that utilizing heavy resistance training (85% to 95% of 1RM) seems to be one of the key factors that influences acute serum Testosterone concentrations following exercise. I don't recall hearing many reasons why increasing your Testosterone levels would be a bad thing, unless of course you're a woman who happens to have an unwanted penis.

In a nutshell, lifting maximal weight (90%+) has a number of effects:

What About Athletic Performance?

You've probably noticed me using the words "power" and "force" quite a bit, and with good reason. Both play crucial roles in developing strength and athletic performance. Power simply refers to the ability to apply a lot of force in a minimum amount of time (Power = Force x Velocity). In order to improve power, you need to increase force and/or velocity.

Interesting to note, from a velocity standpoint, it's been shown that power output increases as the weight lifted decreases from 100% of 1RM to 90% of 1RM. In fact, for the back squat and deadlift, power output for a load at 90% 1RM may be twice as high as the 1RM load due to the large decrease in the time required to complete the exercise with the lighter load (1).

This obviously shows how velocity plays an important role and why using the dynamic effort method is a great way to improve strength. Optimal speed and power can only be maintained for approximately six seconds. Anything more and lactic acid accumulates and the additional hydrogen ions interfere with the contraction of the fast twitch muscle fibers.

In his book, The Vertical Jump Development Bible, Kelly Baggett talks about how the vertical jump is one of the best predictors of athletic performance. Essentially, how much force you can generate in a short amount of time (0.2 seconds for the vertical jump) is going to separate a superb athlete from an average athlete.

Because I'm more of a visual learner, I'm going to share an example from Kelly's book:

As you can see, athlete A can squat more than athlete B, but athlete B is going to have a better vertical jump because he can generate more force, rapidly. However, Kelly makes a point in stating that, "Although being able to apply force rapidly is a very useful characteristic, you still need to have enough potential force to tap into for anything to happen. Basically, a strong athlete will beat a weak athlete any day of the week."

Maximum strength is the foundation for everything (power, strength endurance, force development, etc.). You can't have strength endurance (being able to lift a sub-maximal weight repeatedly) or generate maximum force without first having strength.

Here's another example from Kelly's book to help illustrate this point:

The weak athlete is able to utilize 95% of his potential force and has a good rate of force development; however, he's only able to squat 100 pounds. He has very little to "tap into" and is only able to generate 95 pounds of force off the ground. Needless to say, he's going to be that guy who's lowering his adjustable rim in his driveway to eight feet so he can dunk a basketball.

The "ideal" athlete is only utilizing 75% of his potential force (20% less than the weak athlete), but is generating 325 pounds of force off the ground because he's strong. Again, strength is the foundation for everything. More specifically, relative strength trumps absolute strength from an athletic standpoint.

For my own peace of mind, I provided the following list of exercises that would be acceptable to use, questionable to use, and well, just plain dumb to use. This certainly isn't an all encompassing list, but I think you get the general idea:

It's no surprise the best movements to use are the basic "money" exercises (squat, bench, deadlift). Also, be cognizant that "more is not better." Like many trainers and strength coaches, I like to set up programming where volume/intensity is fluctuated each week to coincide with CNS fatigue and/or to stave off overtraining. Lifts above 90% are very CNS intensive and are not something where you're going to need (or want) to do a lot of volume with each and every week.

That being said, you should limit your training sessions at 90%+ to seven to nine PER MONTH. Beginner and intermediate lifters could probably get away with more sessions per week above 90%, but as one gets more "advanced" twice per week is plenty. The following is sample three day split. Please note that I purposely left out specific sets/reps for all the accessory movements because everything would all depend on the weaknesses or imbalances of each individual.

There are many reasons to incorporate lifts above 90% into your training. I think many lifters are experiencing their own Choose Your Own Adventure when it comes to their training, and they're getting less than stellar results.

You can either choose to keep doing what you're doing and not make any progress, or you can choose to embark on a new adventure and take your body to places it's never been before. The choice is yours.