Contrary to popular belief, the "lumberjack squat" isn't what people in the logging industry head off to do behind a large poplar tree after having a hearty breakfast of bran flakes.

Instead, it's a helluva' cool squatting movement that doesn't compress the spine.

Furthermore, if you've got a newbie under your wing, there's probably no better way to teach him proper squatting form. You simply can't do the movement unless you keep your chest puffed out and your lower back arched.

Simply place one business end of an Olympic bar smack-dab in a corner of the room (if you don't own the apparatus shown in the picture). Load up the opposite side with a plate or two, grasp the bar with both hands, and hoist it up to chin level.

To make it more challenging, try the double contraction method – that's where you squat down completely, bring yourself halfway up, squat all the way down again, and then stand up all the way. That's one rep.

Once you try this movement, we're pretty sure you'll want to make it a regular part of your squat program.

Steady state aerobic exercise makes you slow, fat, and weak. Or is that belief just holding you back? Check out this info.
Fat Loss Training, Metabolic Conditioning, Metcon, Training
Anthony Mychal April 19
This posterior chain program might just give it to you!
Training
Don Alessi November 9 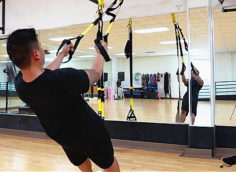 Bad posture? Try this if you're chronically internally rotated at the shoulders. Good for rear delts and upper back too.
Exercise Coaching, Mobility, Tips
Calvin Huynh August 4