We often say that the most important leg of a three-legged chair is the fourth, the missing one. Well, when it comes to the human body, the muscles composing the hamstring group (biceps femoris - long and short heads, semitendinosus and semimembranosus) are usually that fourth leg.

Quite simply, most athletes have horrendous hamstring development. This not only puts the athlete at risk of injury on the playing field, but it also significantly reduces performance potential. Why? For the following reasons:

Many people still believe that the quads are the most important "speed muscles" in the body. Not true. This false belief has led to many athletes short-siding their results by becoming excessively quad dominant. The true speed muscles are the hamstrings and glutes. Both play a much more important role in the running stride, especially at high velocities.

Most of the time, hamstring training is put back at the end of the line. A classic lower body training session might involve the back squat, leg press, leg extension, and leg curl. As you can see, not much emphasis on the hams! And most importantly, when they are trained, they aren't trained according to their capacities and functions. To design a proper hamstring workout, it's important to understand that:

These four observations should influence program design. It means that both functions should be trained and that methods emphasizing fast twitch fiber involvement should be selected. Such methods include: accentuated eccentric training (eccentric or negative muscle action preferentially recruits fast twitch fibers), heavy lifting, and explosive lifting. Training the hamstrings isometrically is also very effective.

With that in mind, here's a very effective hamstring development program that's sure to reduce your risk of lower body injury and drastically increase your speed and agility.

Hip extension can either be fixed (meaning that both feet stay on the ground) like in a Romanian deadlift or good morning, or it can be free, like in a reverse hyper or a low-pulley hip extension.

For our heavy exercise we want to select the type of movement in which we'll be able to use the most weight: the fixed hip extension exercise. It can either be a Romanian deadlift or a good morning.

This first option requires a reverse hyper machine. Sadly, not all gyms have such a piece of equipment. For those who have access to this wonderful piece of machinery, you're going to use the 2/1 technique. This means lifting explosively with two legs and lowering it slowly one leg at a time.

This second option isn't as good as there's less eccentric accentuation, but it'll work if you don't have a reverse hyper machine. You'll want to lift the load as fast as possible while returning it in 5-6 seconds.

The second workout is designed to work on the knee flexion role of the hamstrings. Our first exercise is performed with heavy weights. For this we want to use the exercise in which we'll be able to lift the highest load, so we'll begin this first workout with the glute-ham raise.

This is one of the finest exercises for hamstring development. Sadly, this is another great device not found at every gym, but if you have access to one, better learn to use it!

Note: hold a weight on your chest if you can perform the prescribed reps easily.

If you don't have access to a glute-ham bench, you can substitute this first drill with regular leg curls performed with heavy weights.

Hamstrings and biceps respond the best to accentuated eccentric training. This is primarily due to their fiber makeup as well as isolation function as flexors. So for our second exercise we'll use the 2/1 technique on the lying leg curl. This means lifting the load explosively with two legs, and lowering it under control with one leg only.

To once again take advantage of the high responsiveness of the hamstrings to eccentric loading, we'll perform the eccentric-only (negative only) glute-ham raise, also called natural GHR.

The objective of the drill is to lower your body toward the ground as slowly as possible. Try to control the descent for as long as you can. You then use a slight arm push to lift yourself back to the starting position. Try to keep your back as straight as possible (no forward bending at the trunk).

Our last exercise will develop maximum isometric strength in the hamstrings. To do so, we'll use the lying leg curl and simply hold the weight in place for a certain timeframe.

Since gains from isometric training are position specific, we'll use three different positions: contracted, mid-range, and nearly extended. Note that you don't perform all three positions in a row (in the same set); perform all three sets of each position before moving on to the next.

When focusing on hamstring development you'll need to devote two days per week to this muscle group. Ideally, these workouts would occur on Mondays and Thursdays. A sample schedule could look like this:

If you don't want to train more than four times per week, one of these schedules would be adequate:

The right supplements can give you an edge that'll allow you to reap better gains. If you're a competitive athlete, this could mean the difference between fifth place and winning. Here's a sample supplement program that's sure to help you get the most out of your training:

This training program is super effective because it targets all the functions of the hamstrings, plus it trains all types of muscle contraction (concentric, explosive, eccentric, and isometric). It's quite simply the fastest way to grow strong and powerful hams, and it's sure to drastically boost your performance and reduce the risk of injuries.

Hammies aren't fun to train; they're the least "showy" muscles of them all. However, those who train them hard will truly separate themselves from the pack!

Women get curves by building muscle. They show those curves by losing body fat. Why then are they doing everything to make both those things so damn hard?
For Women, Training
TC Luoma August 18

This is one of the best training methods we've used for biceps. It's very different, but very effective. Check it out!
Tips, Training
T Nation June 18 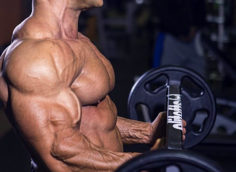