Whenever you're dealing with a lagging body part or lift, the solution usually involves simply paying more attention to the stubborn area.

"If your life depended on adding 100 pounds to your squat in three months, do you think you'd start training it less or more?"

The method I'll introduce to you here is a smart, elegant way of training "it" more.

Very simply, the essence of the hub and spoke method is that one lift becomes the "hub," and then you'll add 3-5 exercises that become the "spokes."

The hub is either an exercise you're trying to bring up or an exercise designed to target a lagging muscle group. The spokes are (ideally) exercises that target different muscle groups so as to minimize redundancy between the hub exercise and the spoke exercises.

As a simple example of a hub and spoke workout, let's assign chins as the hub, and we'll use three spoke exercises:

For reps, there are no hard and fast rules, but as you'll see in just a moment, you'll end up doing one and a half times as many sets for the hub exercise as you'll do for each spoke, so take that into consideration when you're considering rep assignments.

In this example, we'll do chins for sets of 5, and each spoke exercise will be performed for sets of 10. Here's what the first round will look like:

By now you can visualize the hub and spoke arrangement. You start at the hub, and then proceed to one spoke, and then back to the hub, then to the next spoke, and so on. I also like the fact that the hub symbolizes something of central importance.

In terms of how many rounds you should do, think about how many sets were performed in the first round, which is related to how many spokes you're using. In this example, 3 rounds amounts to 18 work sets. Assuming 3 minutes of rest between each set and perhaps 30 seconds for each set itself, you're looking at a 63-minute workout after warm-ups.

Here's an example of a weekly training cycle utilizing the hub and spoke arrangement for the developmental phases of a competitive powerlifter. It'll be easy to apply this concept to your own training with just a bit of imagination, regardless of your personal goals or sport aspirations.

Start with one rep of each exercise, then do two on the next round. Keep the ladder going until you're doing 10 reps per movement on the last round. No rest!
Exercise Coaching, Fat Loss Training, Metabolic Conditioning, Tips
Eric Bach February 11 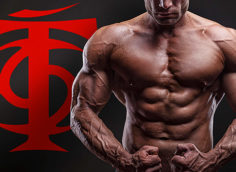 Getting lean requires mental preparation. Here's how to get your mind ready and your body lean.
Christian Thibaudeau May 17