Chiseled abs and an awe-inspiring butt that's as round as it is firm. Those are the goals of most people in the gym. So why do so many otherwise fit-looking people fail to ever achieve this gold standard they've been working towards for years?

Any buffoon can "work hard" but it takes focus and planning to actually achieve a goal. If you're going to aimlessly pound your body into dismay, shouldn't you be able to strip down to a swimsuit without the shame of a jiggly gut and an embarrassingly straight line of non-muscle that runs from your lower back to your knees? This flood of over-exercised and improperly trained lifters has given rise to a disturbing phenomenon: Fat Gut, Flat Butt Syndrome. Here are some surprising things that cause this condition, plus how to fix it.

There are a few glaring issues that the common fitness enthusiast needs to address before moving forward with advanced programming. Let's take a deeper look at the three most common pitfalls that are eating away at glute mass and ab definition.

1 – Sitting Too Much is Like Eating a Big Mac

While office jobs and other sedentary work obviously don't burn a lot of calories, the simple act of sitting is also causing some staggering orthopedic issues that lead to protruding guts and droopy butts.

The act of directly exerting pressure through your gluteal group while sitting can create an ischemia environment – a restriction in blood supply to tissues. This leads to increased rates of movement dysfunction, denervation, and local muscular atrophy in arguably the most important region of the body for the maintenance of long-term orthopedic health.

Prolonged sitting causes chronic posterior pelvic shifting and malalignment that can even translate into your standing and dynamic daily postures. Even more shocking, exerting as little as 15 minutes of direct pressure through the glutes in the seated position can trigger these unwanted gluteal side effects. Not only will poor posture make your lower back and hip feel like crap on a daily basis, it'll also create the perception that your abdominal region is more protracted and lumpy than it actually is. You'll feel worse, you'll move worse, and you'll look worse.

Sitting can also significantly impair overall caloric expenditure during an eight-hour workday. It's been shown that people who sit more than eight hours a day burn approximately 25% less daily calories than more active/standing counterparts. Do the math and weep: In a "standard" 2,000-calorie diet, that's the equivalent of one Big Mac a day. So, in more ways than one, sitting all day is junk food for your body. Simply standing up and moving around more is a great "diet" if you have to sit most of the day.

2 – Doing Too Much Cardio

Cardio-heavy routines present a few problems for fat loss. We aren't talking about strategically using a few short sessions each week, but rather doing cardio as the primary source of your fitness activity. One of the biggest training misconceptions is the idea of aerobic exercise being a superior fat loss tool compared to its counterpart, anaerobic training. While the actual calories burned during exercise can be higher in traditional cardio, the "afterburn" effect has been shown to stimulate the metabolic state from resistance and high intensity interval-based training far greater than moderate intensity steady state cardio.

Walk through the average commercial gym, especially any gym that feeds you a cheat meal before you even start the workout, and you'll see row upon row of treadmills, exercise bikes, and ellipticals. Let's call them the Terrible Triad of cardio machines for their direct role in the loss of gluteal muscle mass.

On the treadmill, and with running in general, most individuals lack a certain thing called "good form" when attempting to slog through a few miles. Instead, it's usually associated with uncompensated hip extension moments with every step. A lack of hip extension turns running into an overly flexed mess at the hips and spine and, in the process, turns off any chance of deep activation of the glutes.

While the elliptical can be considered slightly more effective than the treadmill in the general population due to its reduced balance component and simpler mechanics, those benefits are actually a double-edged sword. Less stability requirement means less activity through the posterior-lateral hip and less activation at the gluteal group to maintain an upright position. The requisite stability at the hip is further decreased when you grasp the handles and pump away.

The bike is actually one of my favorite cardio and conditioning tools due to its ability to pack on some decent muscle mass through the quads if programmed at the right intensities. However, very few people actually jump out of the seat and crank at maximal intensity unless you're in a SoulCycle class sweating away $75 per session. Remember that thing about sitting on your glutes and how it can negatively affect their function and overall form? Well, sitting is sitting, and that goes for the upright and recumbent bikes as well.

To add to this argument, chronic adherence to moderate steady state cardio with little variation, progression, or manipulation of intensity can do some pretty nasty things to your hormonal balance. Charles Staley said it best, "Jogging is probably the most effective form of non-surgical gender-reassignment available for men."

Slaving away on the hamster wheel isn't doing anything notable for your hormonal balance. Mess with those hormones and extra belly fat is almost inevitable. Back off the traditional cardio and do more high intensity interval-based training and weight lifting.

For those that do realize that resistance training is a smart and effective form of fitness that will continue to produce notable results in terms of orthopedic health, systemic wellness, body composition, and overall sexiness at any age, this is one huge step in the right direction.

What a lot of people forget is that to achieve all the many benefits of strength training, one of the most effective ways to get there is the incorporation of glute-emphasized movements. Many novice routines are very anterior chain dominant. Similar to cardio, the easiest and most popular forms of strength training for the layperson involve poorly executed squats, lunges, and machine work. None of these really target the glutes and absolutely do not stimulate or fatigue these fibers enough for a notable benefit.

Not everyone can target the glutes with great squat mechanics or feel confident executing deadlift variations with loads that can really stimulate the posterior chain. But these training shortcomings are no excuse not to tap into the many benefits of glute training, including the maintenance of lower back health and simply burning more calories. But simple exercises such as the glute bridges, hip thrusts and their many loaded variations have a quick learning curve and are safe and effective for building that backside. 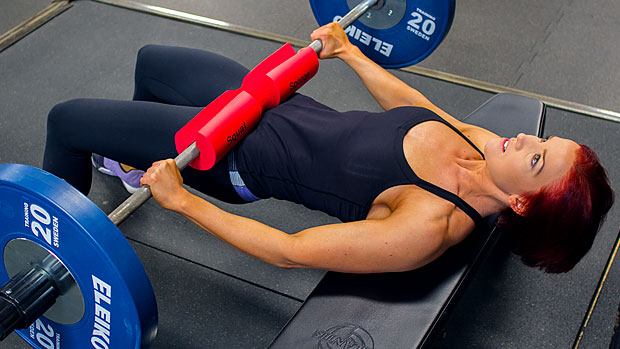 Programming direct glute work multiple times a week can revolutionize any training routine, and any booty for that matter. The glutes are one of the most powerful muscle groups in the body, composed of three separate but synergistic muscles that are primary hip extensors and aid in hip external rotation, abduction, and even stabilize the entire posterior chain when working properly.

The gluteus maximus is also the thickest and strongest muscle in the body capable of burning a surplus of calories and adding some giant coals to the metabolic fire when trained effectively. If you want to burn fat at exponential rates for hours after you train, focusing on directly training the glutes may just be the most efficient way to get there.

It's one thing to "activate the glutes" like every functional training guru preaches, but it's an entirely new thing to fatigue these fibers to the point of needing to remodel the local active tissue. While activating is one step in the right direction, executing intelligently designed programming to strategically target the glutes for strength, hypertrophy, and metabolic conditioning has the ability to take your training and fat loss efforts to an entirely new level.

This puts you in a safer, more efficient position for big pulls and new PRs. Here's why.
Tips, Training
Tony Gentilcore December 11 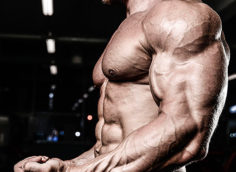 Rest, ice, and Celebrex aren't the ways to treat strains, tendonitis, or fractures. John Berardi and Ryan Andrews tell you how to win the war against injuries using items from your pantry and fridge.
It Hurts Fix It, Training
John Berardi, PhD & Ryan Andrews September 18