The Glute Guy is back, poring through the current research to find the hidden gems to spice up your training.

I work tirelessly to keep T Nation readers up to date in both the practical and research aspects of strength and conditioning, and I've got some great stuff for you this month.

Like the last two installments, the typical lifter, athlete, personal trainer, strength coach, or physical therapist is bound to find something useful in this article.

One drawback of traditional barbell or dumbbell curls is that the top portion of the lift isn't overloaded. By using kettlebells you can augment the strength curve and place more tension at the top of the movement.

When maximal elbow flexion is reached with the kettlebell curl, the resistance moment arm is substantially further out compared to that of dumbbells and barbells.

For this reason, if you have access to kettlebells, try substituting them for barbell or dumbbell curls from time to time for varied stimulus.

Winding Titin – Actin/Myosin is Old-School; Now it's All About Titin/Actin/Myosin

This is a very big deal for muscle mechanics, so pay close attention. For over 50 years our knowledge of muscular contractions has been flawed. Though we understood most of it, several critical questions remained unanswered, and textbooks failed to offer a complete picture.

The "sliding filament theory" involving actin-myosin cross-bridge formations was missing something important. Researchers have been searching for an "internal spring" for a while, and titin (also known as connectin, the largest protein in the body and the third most abundant protein in skeletal muscle tissue) has long been suspected to be this spring, but scientists haven't proposed a plausible mechanism as to how.

Enter the work of some brilliant research papers by Nishikawa et al. (2012) and Monroy (published ahead of print).

I realize that this is a very complex topic so I'll try to sum it up simply. Though direct proof hasn't been witnessed yet and this is just a theory, most of the world's top researchers in this specific area are confident based on logic and calculations that the following is what really goes down when muscles contract:

This theory explains much of the previously unanswered questions: it explains why skeletal and cardiac muscles have different length-tension properties (cardiac muscle is never stretched when active so it doesn't receive the same spring-like benefits).

It also explains why activated muscles have enhanced force compared to passive muscles at identical lengths (active muscles store elastic energy through stretched titin, and the greater the stretch, the greater the force enhancement).

Here are two pictures that can aid in your understanding of this phenomenon, courtesy of the Royal Society: 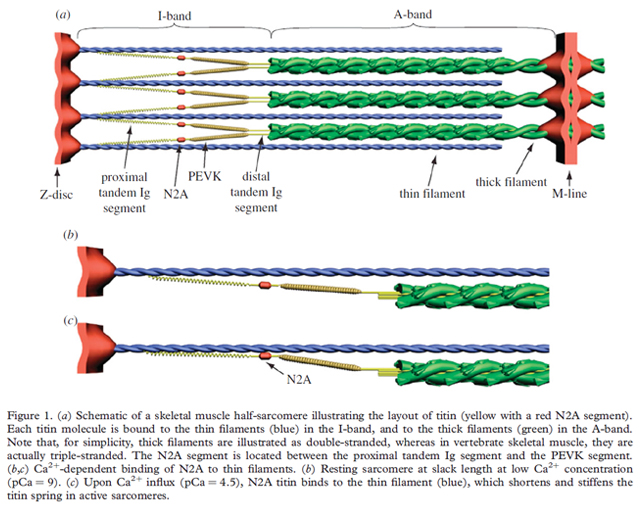 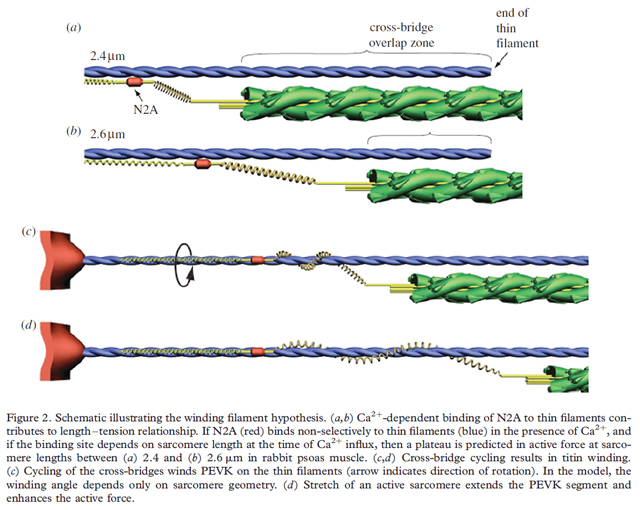 In the last installment of The Contreras Files, I discussed some of the benefits of hex bar deadlifting especially as it pertains to maximum power production. Many strength coaches prefer the hex bar deadlift to the conventional deadlift for its increased safety due to reduced spinal loading.

I prefer the conventional version. Why? I'm all about the hips!

Swinton and colleagues (2011) examined the joint moments (a moment is also known as torque, or "turning force") during hexagonal and straight barbell deadlifts using submaximal loads up to 80% of 1RM. Here are their findings with the 80% of 1RM loads:

Considering these results, calculations reveal that the conventional deadlift produces:

Here's the way I see it. A strong case could be made for either variation's superiority. One could argue that the hex bar deadlift is the safer of the two due to reduced spinal loading.

One could also argue that the hex bar deadlift is a more "well-rounded" lift due to its significantly greater knee extension torques (Stuart McRobert in Brawn referred to the exercise as a "squat-lift" since it's more of a hybrid squat/deadlift exercise).

However, in strength and conditioning, we aren't restricted to performing just one exercise. If I want to load up the knee joint (quadriceps), I'll perform a squat, front squat, or Bulgarian split squat as these movements take the knee joint through a fuller range of motion.

In the last installment of The Contreras Files, I discussed the training practices of strongmen. In this installment, I'll do the same for powerlifters.

It's been said that "abs are built in the kitchen." Research shows that the notion of spot-reduction for the abdominals is indeed a myth (Vispute et al. 2011). So if you're looking to have nice abs, focus on getting lean through diet and general strength training.

However, there are certain individuals who seek to maximize the muscularity of their midsection, and these folks are often interested in targeting the upper or lower abs.

My EMG experiments have shown that it's indeed possible to shift the emphasis toward the upper or lower abdominals depending on the exercise. If you're seeking increased upper abdominal activation, perform trunk flexion exercises with a fixed pelvis such as a Swiss ball crunch.

But if you're seeking increased lower abdominal activation, perform abdominal movements that posteriorly tilt the pelvis such as a reverse crunch. Or you could go with a "pillar chin up" where you prevent the pelvis from anteriorly tilting during a chin up, or an RKC plank (highlighted in the last installment of The Contreras Files).

If you want more evidence, Moreside et al. (2008) showed that experienced belly dancers could completely separate upper and lower abdominal activity during belly roll movements, and that the lower abs dominated the upper abs when pelvic motion was conducted upon a relatively fixed trunk.

Here's a really cool posture-corrector (or better-yet "negative-posturing prevention exercise") that I learned from Smitty. The bands essentially mimic what sitting at a computer does and you have to fight against the elastic resistance, which strengthens the muscles associated with good scapulothoracic and scapulohumeral posture.

Moreover, Testosterone responses were slightly greater following Bulgarian split squat compared to squats, despite the loads used in the single-leg movement were roughly half of those used in the double leg movement.

The researchers suggest that the increased stabilization demands could explain these findings, but I believe it has more to do with the rear leg contributing heavily in the Bulgarian split squat as my EMG experiments have shown that hip flexor muscle activation is through the roof during this exercise.

This is a good thing, as simultaneous activation and stretching of the hip flexors will keep the hip flexors flexible and strong at end ranges. It should be mentioned that McKurdy et al. found that during the Bulgarian split squat, the load on the front leg was approximately 85% of the total weight (body weight plus barbell weight), indicating that the front leg bears most of the load.

Pause With the Floor Press

Many lifters perform the floor press as an assistance lift to build their bench press or emphasize the triceps during the pressing motion. I argue that lifters benefit more from this exercise when they pause for a full one-second count rather than rebounding from the eccentric phase right into the concentric phase.

Think of the floor press like a box squat – relax the pressing muscles for a brief moment at the bottom of the movement and then explode upward by rapidly turning-on the pressing musculature.

The American Deadlift: The Only Way to RDL

I no longer like the Romanian Deadlift (RDL) and believe that all lifters should be performing "The American Deadlift" or ADL.

What's the difference? Well, the ADL is simply how all good RDL's should look.

I rarely, if ever, see lifters use their glutes to their full extent during RDL's. The gluteus maximus' role as a posterior pelvic tilter is highly underdeveloped and building this capacity is essential for proper lumbopelvic functioning and lifting prowess.

Simply lower the load with an anterior pelvic tilt and lumbar extension while sitting back to really stretch the hamstrings (just as you would in a regular RDL), but on the way up transition into a forceful posterior pelvic tilt with maximal glute contraction.

Cluster Training for the Deadlift

There are an infinite number of possible ways to arrange a cluster set, but here's a specific protocol that I really like. Recently I put on some really loud music, loaded up the bar to 405 pounds (around 75% of my 1RM), and pulled ten explosive singles with about 10-15 seconds of rest in between reps (as much time as it took for me to walk around the inside perimeter of the training studio).

This was an awesome training stimulus and something I'll try to do more often. To reiterate, the protocol is:

Remember to pull with maximal acceleration. 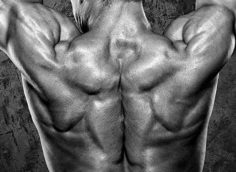 Use these tips and cues to get better results from barbell rows.
Exercise Coaching, Tips
Tony Gentilcore March 8 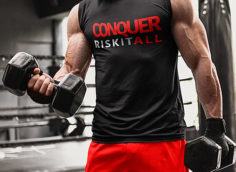 If your fat loss, muscle gains, or strength gains have stalled out, this important lesson is for you.
Tips, Training
Paul Carter June 20