Sorry, but the "big three" powerlifts – the squat, the bench press, and the deadlift – just aren't enough.

They're not enough to maximize mass or even maximal strength.

Make no mistake, training the big three are a great way to develop the lifts and they can be great tools to get larger and stronger. After all, you have to practice like you play, and you need to spend enough time under the bar actually doing those lifts in order to perfect technique and get good at them.

But the majority of guys who want to get maximally jacked and not have any weak links in those lifts or their musculature need to do more than just settle on those lifts.

Now, you can argue that there are top powerlifters who do the big three and little else, but there's a bit of faulty reasoning in using them as examples:

But let me make my case. First, the deadlift.

The deadlift is obviously a great movement to build and demonstrate overall strength. It's often used as the barometer for what's strong. After all, you're basically just picking shit up off the ground.

Now, I didn't say you can't build mass with the deadlift. Clearly, you can. But the deadlift alone isn't a great mass-building movement.

Most of the musculature doing the work in the deadlift is in an isometric/static position, but the movements that offer loading with a significant deal of stretch in the eccentric portion offer a greater potential for growth.

The deadlift starts from the floor so there's no eccentric (lowering or negative) portion of the movement when done in competition style. No eccentric component, little growth.

Here's what eccentric specialist Jonathan Mike, PhD, said in regard to eccentric loading and the deadlift:

"There's very little eccentric loading and activity, and very little TUT (time under tension) especially if you count the time the muscles are actually producing a lot of force, not the time that the lift lasts."

Make note of his comment regarding TUT because it's important. Even if you perform a deadlift where it takes 5 seconds to complete the concentric or lifting portion of the lift, there are so many muscles involved that the TUT is dispersed very broadly, so much so that none of them get a ton of direct stimulation.

Add in the fact that the only significant joint movement comes from a slight amount of hip extension (and even less knee extension, proportionally speaking) and it amounts to several drawbacks that don't put it on par with other big movements from a mass building perspective.

Lastly, the deadlift seems to take more than it gives back. Heavy deadlifts have a penchant for wrecking systemic recovery while not adding a whole lot in terms of muscle building.

Does this mean you should exclude the deadlift from your mass-building arsenal? Not at all. In fact, I usually include deadlifting as a part of mass building programs because it's a tremendous tool for building overall strength.

But if you want a deadlift variation that offers more bang for its buck in terms of building pure posterior chain mass, the stiff-legged deficit deadlift is a more superior option.

You can place a big emphasis on both the stretch portion and eccentric portion of the movement, and that means big-time posterior chain growth.

Apparently, we all love bench pressing. That's why every Monday of the year is National Bench Press day in every gym across the land.

And make no mistake, the bench press is a great movement for building the pressing musculature of the torso.

But relying on benching alone, or doing too much benching without any other variations, will often overdevelop the front delts and triceps in relation to the pecs and cause that "hunched over" look you see in a lot of guys with I.L.S. – imaginary lat syndrome.

Anecdotally, if you look at the chest development of great bench pressers, it's often pretty poor. Yet most bodybuilders have well developed pecs and most of them don't base the foundation of their chest work around barbell bench pressing.

That's simply because they bench press differently in order to either press more weight or build muscle, but the majority of lifters don't know how to change how they do their bench press in order to maximize either quality.

However, people will throw 10,293 studies at you to prove that the variation will cause shoulder cancer and they avoid it. But Vince Gironda used it as a great chest developer and to my knowledge nobody's shoulders exploded into a bloody mess.

Furthermore, people generally use pretty atrocious form while bench pressing (bouncing, ignoring scapular retraction) so that they pretty much take the pecs out of the movement anyhow.

If you want chest development, you can't just rely on the bench press. Dumbbell pressing at various angles and flyes performed correctly (palms forward and concentrating more on the stretch and contraction portions of the movement without going overly heavy) are much better options for complete development.

The bench press can be a great weapon in your mass and strength building arsenal, but it's status as a legendary chest builder has been grossly overstated.

Despite its rep as the king of all exercises, the squat also has its share of limitations from a muscular development standpoint.

The squat really isn't great at maximizing glute development for most people, and depending on your leverages, it may be a poor choice for building the quads.

One of the drawbacks to the big three is that they often ask certain muscles to perform the work, but because of disadvantaged leverages of the lifter, they're often poor at developing those muscles. The squat is no exception.

My own squat was an issue for a while despite the fact that I had moved it to well over 600 pounds without wearing a belt or knee wraps. But the fact was, my quad development was lacking, and I often found myself suffering from slight muscle pulls or even major problems like tearing my quad in competition.

When I took some time out to reflect on why and talked to some other guys that had the same issue, I heard one thing over and over again:

"I needed to bring up my quad strength and mass."

They ultimately figured out that they had to include things like hack squats, leg presses, and front squats into their routines in order to actually both maximize quad size and squat strength. The squat simply wasn't enough to maximize either.

And while you do need to perform a lift to excel at it, the shortcomings involved can't always be overcome by a tenacious dedication to that lift.

Dorian Yates came to that realization about squatting pretty early in his career.

In spite of his love for squatting, it was actually a very poor quad developer for him because of his structure. The Smith machine squats (gasp!) with his feet placed slightly ahead of him targeted his quads much more effectively.

If you're a competitive bodybuilder, the fact is you may never need to do any of the big three to be the very best bodybuilder you can be.

If you're a competitive powerlifter, well, it's hard to get around maximizing performance on the platform without practicing the big three lifts.

But if you're the average gym bro who just wants to look swole, then you need to apply some critical thinking as to whether or not the big three are efficient movements for you in order to maximize yokedness.

If you want to maximize both hypertrophy and strength, then it's best to set aside phases where you concentrate on one or the other.

In essence, spend part of the year focusing on getting larger. Then transition into a strength phase where you focus on developing maximal strength with your newfound mass. This is the most efficient way to fully develop each attribute.

During your hypertrophy phase, assess where you're lacking from a muscular development standpoint and make fixing that a priority. If you're like most people, a small muscle is often a weak muscle, and vice versa.

Focus on training that muscle group multiple times a week with different movements to maximize its growth. Use moderate to high reps and increase your volume over the course of the training cycle.

When you decide it's time to transition into a strength phase and want to increase your big three numbers, start reducing the effort applied to exercises outside of those movements and start increasing the volume of those lifts while reducing the frequency of training.

In other words, train the big three once a week with more volume.

Here's one way to put it together:

Remember that in order to meet the requirements for recovery, you need to manipulate volume, intensity, and frequency. If volume and frequency are high, then intensity needs to be dialed down (with intensity being a percentage of one-rep max).

If you want to train with a higher degree of intensity and volume, then frequency needs to be dialed down. Strength peaking generally requires manipulating these as well.

Working on your posture? Your choice of back exercises could be making it worse. Here's what you need to know.
Back, Exercise Coaching, Pull-Up, Tips
Lee Boyce April 29

Love lifting heavy? Then you either have some shoulder issues or you soon will. Follow these 5 steps to get them healthy and keep them healthy.
Mobility, Powerlifting & Strength, Shoulders, Training
Chad Coy & TJ Kuster January 19

From basic to advanced progressions, here's how to finally nail this move without falling down.
CrossFit, Legs, Squat, Tips, Training
TJ Kuster September 29 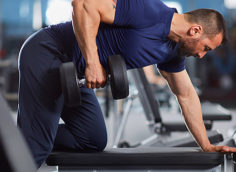 Front load them so that you're actually working your back and not your hips or spinal muscles. Here's how.
Training
Geoff Girvitz March 17