Barbell bent-over rows are a great exercise to address common technique weaknesses and flaws such as trunk stability and strength in the hinge position.

However, when you do them with a supinated (underhand) grip, there's a greater overload stimulus on the biceps and you turn conventional barbell rows into an exercise that truly has a strong purpose.

Six Reasons Why You Gotta Row

Here's why you need to be doing the barbell row, including why the underhand row is superior for most people:

To maximize development of the lats, it's best to pull vertically (chin-ups, pulldowns, etc.) and horizontally with row variations for maximum hypertrophy. So by rowing with both volume and load, you'll maximally develop thickness in the lats.

2 – Rows allow you to practice the hip hinge.

The hip hinge is a primal movement pattern that deserves a place in every good training routine. The hinge is vital to maximize lifting performance on deadlifts, swings, Olympic exercises that build high performance muscle, and strength in general.

Unfortunately, lifters often butcher the hip hinge, which keeps them from holding solid trunk position under load with the hips loaded.

The supinated or underhand grip bent-over row, however, reinforces the ideal hip hinge position, helping you load the glutes and hamstrings for hypertrophy and developing explosive hip extension for maximum power in exercises like sprinting, jumping, and cleans.

3 – Rows make you a better deadlifter.

The most common sticking point in the deadlift is below the knee, which is the same position you hold while performing barbell bent-over rows.

During the deadlift, most lifters that get stuck below the knee are either using too much weight or they lack the trunk and core stability to hold the position. They end up rounding the spine and collapsing into a ball of fail.

It's not worth the risk to miss a lift and risk a flexion-based back injury due to lazy technique. Instead, use rows in general to reinforce technique under load and hold position to keep the lumbar spine out of excessive flexion.

Not only will you protect your spine, you'll turn a previous weakness into a strong point and develop a bigger deadlift.

You have to maintain a flat back position when you row. In most cases, this means the bar is situated close to the body and slightly below the base of the knee from the hinge position to reduce shear stress.

To prevent lumbar flexion, you'll need to brace the abs and hold that position while driving the elbows back and pulling the bar to your torso, building a resilient core in the process.

You want bigger arms? The underhand grip requires significant work from the biceps and provides higher direct loading than any isolation exercise. Since most guys train the biceps with lighter, higher-rep sets, they're not placing the muscles under a lot of tension to spur new growth. 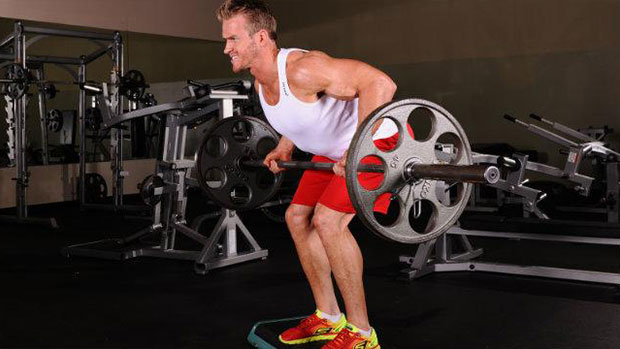 While metabolic stress and long-duration sets play a role in hypertrophy, it's important to stimulate fast-twitch fibers with heavy loads. The underhand bent-over row does a good job of this.

The supinated grip makes you as much as one-third stronger due to increased activation of the biceps. Using heavier weight will provide greater overload in the primary pulling muscles.

In other words, you'll build greater strength in the traps, rhomboids, lats, and biceps due to greater training loads.

How to Underhand Row, Bro

Potential Issues with the Row 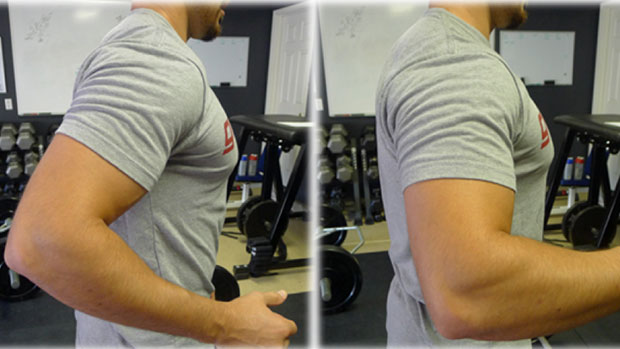 Rather than driving the elbows as far as possible, aim to break the plane of the body, but no further if the shoulder caves forward. This way, you'll optimize muscular recruitment for gains in strength and size without compromising the integrity of the shoulder joint.

Train for size for a few weeks and then strength. It works better for both goals. Here's why, along with a sample 10-week plan.
Bodybuilding, Powerlifting & Strength, Training
Charles Staley February 14

Sometimes even the best lifts stop working. Here are 10 variations to get you growing again.
Bodybuilding, Training
John Gaglione May 5

Arnold Schwarzenegger did a lot of things wrong. He performed endless sets of leg extensions thinking that he was "cutting up" his thighs. He believed that pullovers would spread the rib cage and pull-ups would widen the shoulder girdle by spreading the scapulae.
Training
Chris Shugart July 2

If squatting causes pain in your low back, knees, or shoulders, try one of these pain-free exercises that'll still get you big and strong.
Bodybuilding, It Hurts Fix It, Powerlifting & Strength, Squat, Training
Eirik Sandvik February 20