Take a look at any lifter from the side and you'll notice something obvious: there's a ton of muscle around the hips. The hip is one of the most mobile joints in the human body and it's a crossroads of sorts for almost every movement the body makes.

Think about it. The only other joint in the body even close to the mobility of the hip is the shoulder, and it gets hurt all the time and can often end a lifting career altogether.

The hips are injured a lot less thanks mainly to the amount of muscle packed around these joints.

However, movement at the hips influences movement of the entire body, which means dysfunction at the hips can cause huge problems elsewhere. So if you've had hip-related issues, it may have been the source of other problems that cropped up.

Though the hips are super mobile, the joint itself is very stable. In fact, to dislocate the hip joint, it usually means breaking bone and tearing tons of soft tissue, which isn't likely in those who aren't receiving AARP magazines yet.

Almost every movement you do, from squats to lunges to pressing variations, involve the hips. To move any weight, you must push into the ground, and the ground pushes back, allowing you to generate the forces needed to create movement. Even while sitting the hips are active, just to a lesser extent.

So when your hips are tight or misaligned, it causes a cascade of dysfunction that drives any pain you experience, whether it's in your knees, back, or even at the shoulders. At the minimum, hip issues will hold you back from your best lifts.

Think about your body's physics. When you're lifting anything in the vertical plane, squats to overhead press, you're exerting a force equal to your body weight, the weight you're moving, multiplied by the magnitude of the power you're exerting. This is especially true for dynamic "sprint speed" lifts such as Olympic lifts and throwing kettlebells.

Literally, your feet are pressing ALL of that force into the ground. As the ground "pushes" back, the force is transmitted up through the feet, ankles, and knees, which is then transformed into force that can travel through the pelvis and into the spine.

Hips then become the interface for immense forces that are traveling through the body and influencing the performance of every movement you make while standing upright. So it's no wonder that dysfunction in the hips can lead to disastrous consequences including back injury, knee degeneration, and rotator cuff failure.

Bottom line? You need to be concerned with your hip movement. Train it if you want longevity in your athletics, reduced risk of injury, and maximal strength. This is just the beginning of unlocking your potential.

If there's one thing you should be doing in warm-ups and mobility work, it's the shin box. It comes from martial arts and ground fighting, but it's an essential tool for helping athletes get increased hip mobility.

It can be used to not only unlock the hips, but help you find where you have "silent" tightness and restriction in knees, pelvis, spine, and even shoulders. Then, almost like biological magic, it helps you obliterate the restrictions and improve movement in pretty quick order.

You may have seen the shinbox before, but only the standing version. That's actually the final progression. You need to first break it down. This will increase your spine and hip mobility so that you can do the shinbox properly.

The shinbox goes much further, but this beginning portion is where most lifters need to spend most of their time. Further progressions require even more control and mobility at the hips, as well as specialized breathing techniques to assist the movements. Further progressions are also powerful knee and ankle mobility movements, but can be risky for the knees without proper instruction, time, and progression.

You can learn to do this starting at the ground, working up to standing, and back again never using your hands. You can even learn to load the shinbox with bands, kettlebells, etc., but the unloaded version is foundational. Get it right first because it's a powerful tool all by itself.

The shinbox should never cause pain. If it does, make a few simple changes to your practice. Try going slower, limiting your range of motion until it's pain-free, and breathe more as you move. If the pain doesn't go away, you may be one of the 30% of men or 10% of women with femoral acetabular impingement (FAI), which is when the shape and angle of your hip joint causes it to jam and pinch if you move into certain positions.

If that's you, consult with a healthcare professional, like an orthopedist, if pain persists. Sometimes posture training, called posturology, and soft tissue treatment such as Active Release Techniques (ART) can effectively improve soft tissue tension and create the space needed to "unpinch" the area. Movement training like what you'll find in Z-Health, Pilates, and FMS corrective practices can make enough of a difference to free up FAI hips.

One of the best aspects about doing this simple drill is that you'll quickly find where you have the biggest restrictions, and at the same time use the tool that can fix them. As you work toward improved hip mobility, don't be surprised if you also find some pain. The rule of thumb is, take it slow and only move in pain-free ranges! Doing so will create a larger and larger pain-free range until eventually the entire movement can be done without pain. 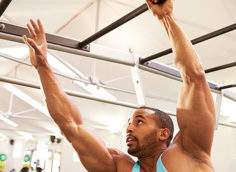 Here's an easy and fun way to bulletproof your shoulders against injuries and even improve your posture.
It Hurts Fix It, Training
TJ Kuster February 19

Pass this relative strength test with flying colors before you bench press. Many people can't, even if they think they can.
Chest, Push-Up, Tips, Training
Dr John Rusin May 3