It's All About The Grip

We devote millions of pixels to discussions on how to position the body when benching, overhead pressing, or deadlifting, but very little attention is ever given to the proper grip. And the grip determines the success of every lift.

Use a false grip.

A false grip refers to an open-hand grip when holding the barbell. It allows you to place the bar a bit lower in your hand – more directly over the forearm bones – and rotate the elbows in a bit more easily.

This will make you stronger and reduce shoulder strain. It also makes it easier to keep the elbows tucked in so that you can rely more on the triceps.

And yes, it's true, not securing the barbell by wrapping the thumb over the bar might be a bit more hazardous. But in all my years of coaching, I've never seen anyone drop a barbell because of a false grip.

Practice caution, of course, but once you get used to it there won't be any problem.

The way you hold the bar at the start of the movement depends on the lift you're performing – press, push press, or jerk.

A jerk is not a push press with a split. Neither is a push press a cheated military press. These are three different lifts.

The problem is that since all three involve moving a bar from your shoulders to overhead, it's easy to see them as three "levels" of the same action.

In the military press the goal is to use only the arms to press the bar to the fully extended position overhead.

In the push press the goal is to use a leg drive to get the bar moving from your shoulders. It's only when the bar reaches about eye level that the arms become the only things moving the bar. The arms do participate to the initial thrust, but they take over only once the momentum from the leg drive reaches its maximum.

In the jerk the goal is to bring the bar just high enough to be able to get under it. For most technically efficient lifters, "just high enough" means just above the forehead – maybe a bit higher for a power jerk. In that lift, the role of the arms is not to press the barbell up, it's to push the body down.

I mention this because the role of the arms and the body determine which grip is the best to use. 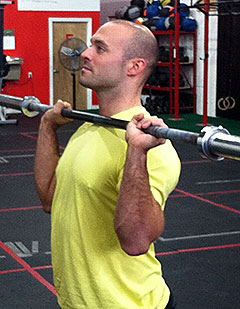 In the military press it's all arms, so what you're looking for is the grip/rack that puts the arms in the best position to push the barbell up.

Just as it is with the bench press, the best position is to have the forearms directly under the barbell. More precisely, it means that the elbows should be under the bar.

And since you want to have maximum force transfer from the arms to the bar, you want to use a full grip – hand closed around the bar – as opposed to just holding the barbell on your fingertips.

Many lifters prefer to keep the barbell resting on their shoulders when pressing this way, but it's not something that all lifters can do. Granted, having the bar resting on the "shoulder shelf" created by the deltoids can be useful by decreasing the amount of force the arms must produce to hold the bar in place.

Where you hold the bar is, of course, a matter of mobility, but also lever length.

Someone whose lower arm is longer than the upper arm will naturally position the bar about 1 inch above the shoulders, for example. That's fine. It's important not to force the bar onto the deltoids for the military press. Instead, focus on keeping the elbows under the bar and the bar as close to you as possible. 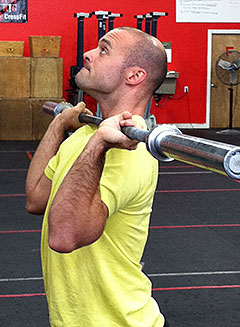 The push press is actually a weird animal because you want to put the arms in a position to push hard on the bar, but you also want to be able to transfer leg drive to the bar.

For the push press, it's imperative that the bar rest on your body in the starting position. You still want to use a full grip for maximum pressing power and keep the elbows as low as possible (as close to being under the barbell as possible), but we want the barbell to be supported by the body to some extent.

In the jerk we want maximum leg drive and force transfer to the barbell, and we also want to do the dip and drive while staying as upright as possible. This means that the barbell should be fully supported on the shoulder shelf created by the deltoids.

The elbow position and grip type – finger tip vs. full grip – is determined by your mobility and levers. In an ideal world you'd be able to have the bar on the shoulder shelf with a full grip and elbows pretty close to being under the barbell, but you don't even see all elite lifters jerking this way.

A lot of lifters have to raise their elbows up significantly to keep the bar on the shoulder shelf and some – normally those with a short lower arm – will have to use a fingertip grip.

These two elements (elbows higher and fingertip grip) make the jerk more complex. Having the elbows higher means the lifter will have to make some readjustments to get the bar fixed overhead. If the elbows are directly below the bar, you just have to lock out your elbows as the arms are already in line.

Using a finger-tip grip means that once you propel the bar overhead, you have to re-grip it with a full grip in mid-air while you're going under the bar. It's not impossible to do, but it does make the lift more difficult. Regardless, plenty of great lifters pull it off with little to no problems.

Proper grip and forearm positions for the jerk. From left to right: ideal grip, lifter with shorter lower arm, and fingertip grip:

There isn't one perfect grip that will fit everyone. On one hand, a wider grip reduces the range of motion you have to press and it also makes it easier to reach the proper finish position for those with tight shoulders.

However, it also places the arms (especially triceps) in a weaker position, which will be especially apparent at the start of the movement.

A narrower grip – where the forearms are perpendicular to the ground – puts the arms in a stronger position to press, and you'll be stronger from the start.

However, it does increase the range of motion and might make it hard for those with poor shoulder mobility to bring the bar behind the ear line at the top of the movement.

When doing a strict press, my preference lies in using a grip where the forearms are perpendicular to the floor during the whole movement. This means a narrower grip with the index finger just outside the edge of the shoulder. Only go wider if you have trouble reaching the proper finish position.

In a push press, I like to go a bit wider because I don't need as much pushing strength from the start and the shorter range of motion makes it possible to use much heavier weights. My push press grip is about 1.5" wider (on both sides) than what I use for a military press.

First, do not use a mixed grip while deadlifting!

I once trained a female powerlifter who developed a pretty severe back problem due to using a mixed grip – one hand pronated, one supinated. This grip is much stronger than a regular double overhand grip because it prevents the bar from rolling in your hands and opening the fingers up.

While this won't be a problem if you only use the grip once in a while, you risk developing an imbalance that could lead to injuries if you do all of your deadlifts this way.

That's why I recommend deadlifting with a double overhand (both hands pronated) grip. That's of course a weaker grip than the mixed one, which isn't necessarily a bad thing since you'll strengthen your grip by training this way.

If, however, you continue to have trouble holding onto the barbell, I suggest that you learn the hook grip.

A hook grip involves trapping your thumb between the barbell and your first 2-3 fingers. It will be painful the first few times you try it, but once you master it, it's much stronger than a regular grip and, from personal experience, just as strong as the mixed grip, if not stronger. 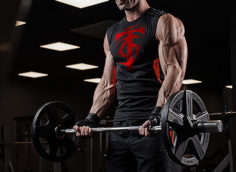