I designed this method to take advantage of the four mechanisms of muscle growth, all “layered” into a single effective set.

It might look like a normal set to untrained eyes – albeit a tough one – but there’s a lot going on. These four layers, performed in the optimal sequence, will stimulate maximum growth.

I’ll give you the main points of the method right now. If you want to know more, stick around for the sciency stuff.

First, select an exercise and the right weight. Make sure it’s an exercise in which the target muscle can be stretched under load with maximum tension. Choose a weight that’s around 70% of your max.

Perform the eccentric/negative phase slowly (about 4 seconds) and use the fullest range of motion possible to really feel a muscle stretch at the bottom of the movement.

Do reps this way until you feel like you only have 1-2 left in the tank. Do not go to failure. That should be around 4-6 reps.

Without rest, switch to regular reps. The eccentric is done under control but not slow. Take about 2 seconds to lower the weight, but there’s no need to count.

Push as hard as you can on the concentric/lifting portion. You can even use some momentum when you feel like you can’t complete normal reps.

Go close to failure. Just make sure you finish on a completed rep instead of failing midway or at the bottom. You’ll need to start the next layer from the top. You should get an additional 3-5 reps in this layer.

Finish the dynamic portion of your set by doing one last super-slow eccentric/negative. Don’t worry about not being able to lift it back up; you won’t have to. Shoot for an 8-10 second negative.

Again without rest, finish your set by holding a loaded stretch at the bottom of the movement. But don’t just “hold” the bottom position of the lift. Try to “pull with gravity” to get an even deeper stretch.

Hold that position for as long as tolerable. Most will reach 15-20 seconds. Getting to 30-45 seconds puts you in the badass category.

Remember, this whole thing is done as a continuous set. There are no pauses or breaks between layers.

One set is enough if done properly, maybe two. You can do one or two “normal” sets to prepare yourself for the intense effort to come, but if you feel like you can do more than two work sets, you didn’t do it right!

What Exercises Are Best?

Pick exercises where there’s a significant load on the target muscle when it’s lengthened. For example, in a barbell curl, there isn’t a lot of tension at the end of the lowering phase (at the bottom), so it’s not a good exercise to use with this method.

You can use any movement you like, provided it puts tension on the muscle at the end of the eccentric phase, but here are some suggestions:

You could use standard squats and front squats, but you’ll need safety pins because you won’t be able to stand up after layer four. 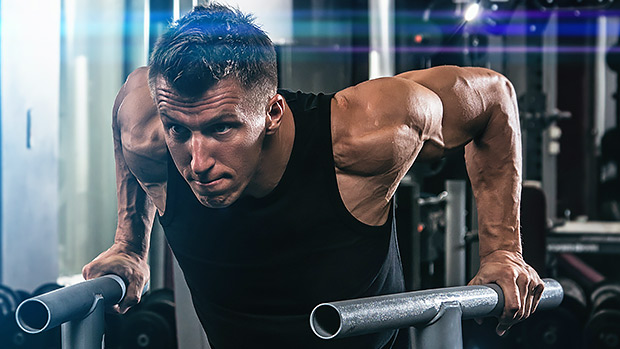 Why This Works – The Sciency Stuff

There are several pathways to stimulate muscle growth. That’s why people can build bigger muscles using all kinds of different, and often opposite, methods. My goal in designing this method was to hit all of those pathways in one set. Let’s look closer at those pathways.

After you cause microtrauma to muscle fibers, the body not only repairs the damage but makes the fiber a bit thicker to be more resilient. The main mechanism to cause muscle damage? Lengthening or stretching a muscle fiber while it’s tensed or contracting.

You need to use a fairly heavy weight. Lighter weight leads to less muscle tension, which reduces the amount of damage you can cause on each rep.

You also need to control the eccentric. Going too fast during that phase will lead to a release of muscle tension, reducing the potential for damage.

A sufficient number of reps per set is also needed to maximize muscle damage. These reps are actually more important than time under tension for muscle damage. Each time you stretch a muscle fiber under load, you cause damage. If you increase each rep’s duration, you don’t increase the damage because it’s the range of motion of the rep that sets the limit to how much damage you can create. Doing the same range slower doesn’t increase the amount of damage.

That’s why sets of 6-10 reps are superior to sets of 1-5 reps for maximum muscle growth. Yes, doing heavy sets of 3 reps puts a lot of tension on your muscle fibers and leads to a lot of damage per rep, but the lower number of reps makes each set less effective at causing TOTAL muscle damage.

Sure, you can counter that by doing more sets of 3 reps, but we’re talking about the efficacy of individual sets here, not of loading schemes.

To recap, to maximize muscle damage in one set…

Basically, mTOR is the “master regulator” of muscle cell protein synthesis. The turnaround point (where you switch from eccentric to concentric when the muscle is lengthened) is the key to get maximum mTOR activation.

If you can feel a stretch in the target muscle at the end of the eccentric phase and create a strong contraction from that position to lift the weight, you’ll get a lot of mTOR activation.

Muscle fatigue helps stimulate growth in several different ways. First, it increases the recruitment of fast-twitch fibers, which are more prone to growth.

Second, it slows down muscle contractions, which will increase the tension you must produce to keep moving the weight. It will also augment the accumulation of lactate and growth factors via an increase in time under tension.

Third, the depletion of phosphagens, which occurs when you cause local muscle fatigue during intense activity, could, itself, be a stimulus for growth. That’s the theory at least.

These are the reasons why some studies show equal muscle growth between heavy (around 80%) and light (as low as 30%) loads, provided the sets are taken to failure.

Why would fatigue increase the recruitment of fast-twitch fibers? After all, aren’t fast-twitch fibers those that aren’t resistant to fatigue and perform better during higher intensities and shorter duration efforts?

It’s because of the way muscle fibers are recruited. Usually, the nervous system will start by recruiting the slow-twitch fibers, which are weaker but more resistant to fatigue. If the weight you have to lift requires more force than the slow-twitch fibers can produce by themselves, the nervous system will start to bring intermediate fibers into play. And if you reach a point where those intermediate fibers aren’t strong enough to lift the weight, you’ll start to bring the fast-twitch fibers into your set.

When the load you have to overcome represents around 80-85% of the maximum weight you can lift at the beginning of the rep, you’ll be recruiting your fast-twitch fibers.

The key part is “the maximum weight you can lift at the beginning of the rep,” not of the set. See, fiber recruitment is not fixed after the first rep. It can change depending on the demands during the set. And because each rep causes some fatigue in the muscle(s) involved, you get weaker from rep to rep. That’s why reps get harder as the set progresses.

Since the load remains the same, but you get weaker from rep to rep, the weight represents a greater proportion of your strength capacity on every repetition. For example, a weight that’s 70% of your max on rep one might be closer to 80-85% of what you can lift when you reach rep five.

That’s why when fatigue accumulates, you can start to recruit more fast-twitch fibers, even with a fairly light weight.

I also mentioned that fatigue can slow the lifting portion of the rep (while you still try to push as hard as you can). Why would that help stimulate growth? Because it forces the muscles to work harder at every point in the range of motion. It’s much harder to move an object that’s static at the start than if the same object is already moving in the direction you’re trying to move it.

It’s the same with lifting weights: the faster you go, the easier it is to keep that weight moving, even when you reach weaker points in the range of motion. If fatigue forces you to go slower, you can’t use velocity and momentum to reduce the effort required to keep the weight moving. You have to rely more on voluntary contractions at any given point in the range.

So those later reps (when you’re fatigued) are performed in a way that’s more conducive to growth. Any way you look at it, accumulating fatigue in a set will help you stimulate more growth. 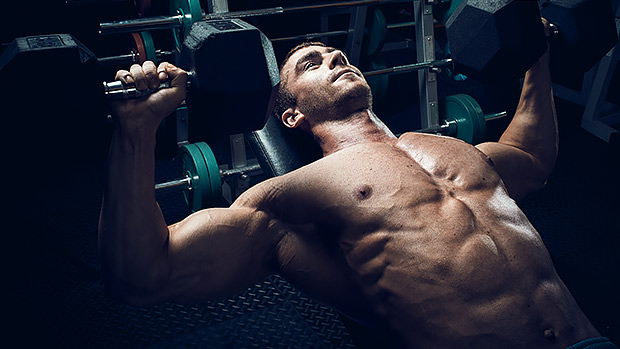 These are the metabolic factors involved in stimulating growth. Specifically, when you resistance train, the body will release certain substances that can play a role in triggering protein synthesis or other mechanisms that can positively influence growth. The two main ones are lactate and IGF-1/MGF.

Lactate is interesting because it can facilitate muscle growth itself. Lactate accumulation can increase the release of follistatin. Follistatin is a binding protein that inhibits myostatin.

Myostatin is essentially the governor of muscle growth: the more you have, the less muscle your body will allow you to grow. Follistatin, by inhibiting myostatin, can thus positively impact growth (1). Lactate is also interesting because it can stimulate the release of IGF-1 and mechanical growth factors, which are two amazingly anabolic hormones.

To get the lactate accumulation necessary for those benefits, you need a long enough time under tension (40-70 seconds) during the set, with a high enough load so that by the time you hit the duration, you’re close to your limit.

Quite a powerful growth cocktail!

Give It To Me In Plain Words

Here’s what each layer does in your set:

By the end of the set, you essentially set off a muscle-growth bomb in your body.

Related:
There’s More Than One Way to Do A Rep

Related:
The 7 New Rules of Lifting