What’s your best tip for training the hamstrings for size or strength?

When it comes to training hamstrings, most lifters already have the basics down. But when it comes down to building a strong, dense, and athletic physique, nothing improves lower body development like sprinting.

But hardly anyone does it. It’s possible you haven’t sprinted in ages. When muscular development is at a standstill, adding that “forgotten” or different exercise is exactly what will jump-start new growth. When combined with a well-rounded lifting routine, two days of sprinting each week will lead to rapid growth in your hams and take your conditioning to new heights.

A simple way to get started is incline treadmill sprints. The incline decreases the footfall when sprinting, which decreases joint stress and prevents you from over-striding and pulling a hamstring.

Try this routine twice per week either after lifting, or ideally, as a separate workout. After you warm-up and do some speed drills, sprint 10 seconds on, 50 seconds off. Go for 10 minutes. Then week by week increase your sprint time by one second and decrease the rest period by one second. Work your way up to 15-second sprints.

In time, this will add athleticism and size to your hamstrings, and it’ll take care of that conditioning you’ve been skipping. – Eric Bach

First, the GHR strengthens the hamstrings at both the knee and hip joint by working its two primary functions, knee flexion and hip extension, simultaneously.

As the name suggests, it also works the glutes. And it’ll hit the lower back and calves too. Strength coach Charles Poliquin rightly suggests that glute-ham raise should be called glute-ham-gastrocnemius raise. Now that’s some serious training economy.

For lifters it ought to be a staple because of its carryover into squats and deadlifts. And for athletes it has the ability to improve sprinting and jumping due to the demands it places on specific muscles, like the hamstrings. One of its other benefits is injury prevention, especially when it comes to hamstring strains and ACL injuries.

If it’s hypertrophy you’re after, GHRs are superior to traditional leg curls because they work more muscles and put greater emphasis on the eccentric (negative) component of knee flexion.

Because the hamstrings primarily contain fast-twitch muscles, they respond very well to eccentric overload. By changing the leverages during the exercise you increase the resistance during the eccentric phase, important for overloading the fast twitch muscle fibers. 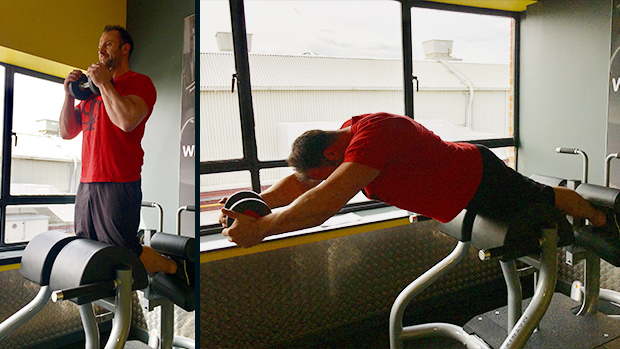 Improve the lifts you already do.

If you’re doing leg curls, make sure to have full hip extension the whole time. Keep your hips pressed forwards into the pad. Most people allow their hips to rise up off the bench and this doesn’t allow a full contraction or shortening of the hamstring at the end of the lift, so you miss out on hamstring development. This is incorrect: 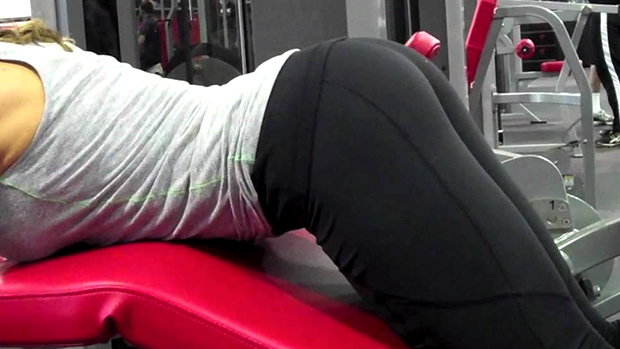 For movements like an RDL, if you have trouble loading your hamstrings, stick a couple of 2.5 pound plates under the front of your feet so you’re forced to push through your heels. Like this: 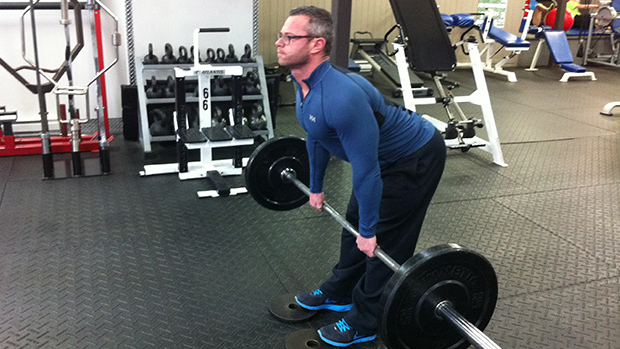 This will load your posterior chain, forcing your body to use its ham and glute muscles. – Paul Carter

Throughout my years of bodybuilding, I did every possible hamstring exercise there was: endless variations of deadlifts, leg curls, all sorts of tempo manipulation and increased time under tension techniques, and though they improved, they remained a weak point.

Then along came powerlifting and low-bar squatting. (Note: Most bodybuilders use a high-bar squat, and quads are the dominant mover.) While preparing for a meet and training mostly in the 1-8 rep range with far less hamstring accessory work, my hams improved significantly in definition and thickness, becoming one of my best body parts.

Here’s a video of my first time trying low-bar squats:

So if you’re looking to improve your hams and glutes, add those into your program and go as heavy as you can. Mechanically this movement makes the hamstrings, glutes and low back work harder than they would otherwise.

You can also move more weight using the low-bar variation, which means more stress on your hamstrings, which can mean more growth. – Amit Sapir

Most lifters don’t know how effective these are. Here’s how it looks:

Do these preferably using a decline utility bench. Get your chest towards the elevated end of the bench. While holding a dumbbell between your feet, perform leg curls.

This variation is crazy-hard compared to the typical lying leg curl machine and in the midst of feeling like a pussy struggling to curl a 40 pound dumbbell, I had an ah-ha moment.

First, the weight is held out at the furthest leverage point – essentially at the ball of your foot versus the ankle or mid-calf as it is with a machine curl. Second, and this is the big one, your feet are in plantar flexion (toes pointing). Because the gastrocnemius muscle attaches across the knee joint, doing a leg curl with your feet in dorsal flexion (toes pull back) makes it easier. This is how most people perform leg curls because they want to use more weight.

The deadlift is a killer for hamstrings. Most people can progress with it quite quickly, build muscle, build strength, and even have fun with it. Nobody ever dreads deadlift day, especially at the start when the numbers just keep on rising.

Unfortunately we’re not symmetrical – no one is. You’ll always have a stronger side and it’s nothing to worry about. It’s really common to see someone during a max effort lift deviate slightly to one side. If it’s a max effort that’s acceptable. But if it happens every time you deadlift, then it’s not. The solution is pretty simple: Test each leg individually, then train them accordingly.

Now, if you’ve never done a single-leg deadlift before, don’t use weight at first. Practicing the movement with your own bodyweight will be more than enough to start with. If your balance is on point and you have no issues engaging your hamstring in this position, start loading it. Light kettlebells or dumbbells will start you off.

The main point is you should look like you are doing a deadlift… on one leg. Keep your lats locked down to avoid reaching with the shoulders and make sure you’re fully aware of your hamstrings, glutes, and where your knee is. Don’t let your pelvis rotate. It’s not an exercise to be Captain Big Balls with, and if you’re going to go heavy with it, stick with sets of 3 at the very least. There isn’t really a need for a 1RM single-leg deadlift.

The first time you try it you’ll feel every inch of your hamstrings the next day. As a diagnostic exercise it’s quite simple: if you can do 100 kilograms (220 pounds) on one leg for 3 reps but can only manage 60 kilograms (132 pounds) on the other leg, the margin is too large. Anything in and around 10 kilograms of a difference is okay.

Be sensible with it and practice till your callouses bleed. It may just be that one supplementary exercise that smashes a personal best for you. – Tom Morrison

Controlled eccentrics – the lowering portion of the rep – can help us tap into the strongest muscle fibers we have available, so why not milk them for all they’re worth? When we “let go” of our negative reps in any basic exercise, like hamstring curls, we forfeit a huge component of the lift that’s vital for both strength and size.

And as long as your knees are healthy, the glute-ham raise with slow eccentrics is a lift that should do if you’re wanting more hamstring strength or size.

So, what about the deadlift? This is a polarizing topic. Some say you shouldn’t be controlling the eccentric at all, while others disagree. When I had an injured back, the first modification I made to my deadlifts was eliminating the eccentric rep by performing dead-stop pulls:

You’ll notice that I bring my tension down by at least 50% and while still in moderate control, allow the bar to drop with minimal resistance. Many lifters make this their standard style of deadlifting. They knock the touch-and-go method since it allows for a transfer of energy between reps. But it’s worthwhile to think about what it prevents.

Deadlifting touch-and-go style with good form keeps the hamstrings from losing tension in any point of the lift. Assuming there’s no rap-video-hydraulic level bounce at the bottom of each rep, it takes much more bracing through both halves of the lift, resulting in a slower down phase and more eccentric time under tension for the hamstrings. Contrast this video to the one above:

Yes, touch-and-go deadlifts are indeed still deadlifts. They just capitalize on other components of your fitness and emphasize a more controlled eccentric. When they’re done well, they shouldn’t be considered inferior. – Lee Boyce

They’re easier to perform and more biomechanically friendly than the stiff-legged deadlift, especially for inflexible athletes, yet they’ll still give you a great hamstring stretch. They teach the hip hinge too. Here’s the basic RDL form:

When you do them with high reps you tend to go more explosive; it’s like a kettlebell swing, but much heavier. They’re awesome at helping lifters improve their lockout on deads. They also hit the traps and the grip very well.

With higher weight and lower reps you can stick with a double overhand (pronated) grip which is good for symmetry. And if you do multiple sets and shorter rests they’ll give you a hell of a conditioning effect. Start light, about 30 percent of the deadlift max.

Contrary to popular opinion, the hamstrings are NOT primarily a fast-twitch muscle group. Even if they were, I’m not sure that would tell us how best to train them.

Nevertheless, with hamstring training the pendulum has swung from one extreme to the next over the past couple of decades. Before we saw too many lifters focusing primarily on knee flexion exercises and not enough on hip extension exercises. Now it’s the opposite – lifters doing heavy deadlifts and good mornings and back extensions with no leg curl variations, glute ham raises, or Nordic ham curls.

To build the most hamstring muscle possible, use about the same volume on hip extension work as you do on knee flexion work. And use a variety of rep ranges: low, medium, and high.

Last, do your Nordics (in the video above) focusing on the eccentric or lowering phase, not the concentric, lifting phase. And perform drop sets with your leg curl variations from time to time; they’re surprisingly brutal. – Bret Contreras

Think about the hip joint and the knee joint. 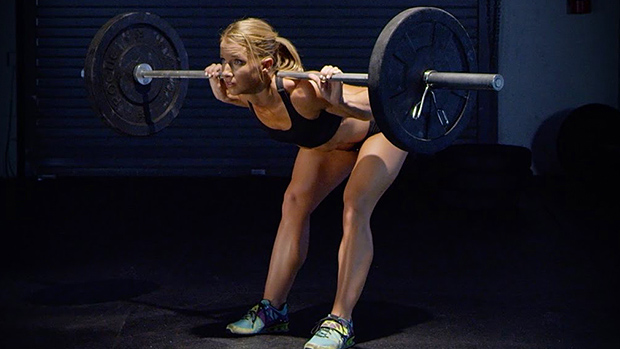 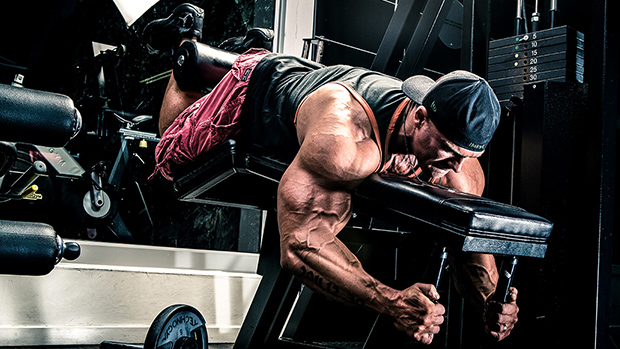 When it comes to hypertrophy, a 2014 study compared the stiff-legged deadlift and the lying leg curl – exercises where movement originates at the hip versus the knee – to investigate whether they’d activate different parts of the hamstrings. The results showed that the lying leg curl elicited significantly greater activation of the lower lateral and lower medial hamstrings compared to the stiff-legged deadlift. Why does this matter? It tells us that different regions of the hamstrings can be targeted by different exercises.