I've spent a big chunk of my life getting schooled by the heavy iron, but with every crushing failure in the gym, I've been able to learn something about grit, determination, overcoming obstacles, and strength.

In 2009, I competed at a powerlifting meet. During the 12 weeks before, I held steadfast to the goal of deadlifting 600 pounds. I was set to move 600 pounds the length of my legs and then scream like a banshee.

It wasn't to be. I got the bar to my knees, but it would travel no further.

I spent the next few years trying to figure out the path to 600. Finally, I wised-up and outsourced the thought process to coach Mike Ranfone. After 12 weeks, I pulled 600 and then 615. Here's what I learned.

For years I was a strength ideologue, preaching strength from a pulpit of lifts at or above ninety percent of 1RM. To me, absolute strength programs with little to no work at close to maximum effort were the devil's word. How could any fair-hearted, strength-minded hero expect to get stronger without hoisting near maximal iron? The growth is in the grind, or so I thought.

During the 12-week training phase leading up to my week of 600 and supra-600 pound deadlifts, the heaviest weight I trained with was 505 pounds. That's right, 110 pounds less than my absolute max, or roughly eighty-two percent.

And most importantly, this was for one set – it wasn't a weight thematic of the entire training cycle. My first deadlift set of the training phase was completed using a tremendous 185 pounds.

I'm not condemning heavier training and swearing it off for my remaining days of training and coaching – it still works, especially for those younger in training years. But if you've been training, competing, and using your body as a spear for close to 20 years, some submaximal training could do your body good. But how does one build so much strength so quickly using such light weights?

Although I used relatively low loads the entire training cycle, I trained every day of the week, deadlifting four of those days. The previous section may have been a bit misleading – it's not like I just did a few sets with 185 and called it a week. I moved that weight with tension and speed every day that I pulled and then, on two subsequent days, added heavier sets.

My daily deadlift sets were the binder twine that pulled together the rest of my warm-up. The focus on all sets was on tension and bar speed. After starting at 185 during week one, I finished the cycle with sets at 385.

The word "patterning" is frequently used in the training world. I should know, I use it a lot. The concept of engraining an efficient motor pattern is important for a program devoted to improving a single lift, even for an experienced lifter. The more often the body is exposed to a submaximal pattern, the more apt it will be to adapt to completing that pattern well, despite the eventual hike in load.

I've also gained the confidence to call bullshit on those that posit that you must cause serious muscle damage or elicit other dramatic biochemical responses to gain mass. Rarely was an eccentric load handled during the program and I found myself dealing with DOMS only on a few occasions.

Though I've built a lot of strength and size with high rep training and sessions that left me on the floor, it doesn't take dumping your body into the trashcan to build size. The faster you can recover, the faster you can stimulate the neuromuscular system and produce growth.

Three days after I pulled 600, I pulled 615. Comparatively though, the lifts were night and day. 600 moved quickly with little form breakdown. The 615 lift, however, swung a bit away from my body and I pulled it the majority of the way with a rounded back and slightly extended neck. I was successful even though my form broke down.

My goal throughout the entire program was to make every rep look the same – consistency sinks the pattern. But when loads are on the north side of ninety-five percent, it's tough to be a form all-star.

The perfect work done with submaximal loads, the efficiency that it created, allowed for success during an inefficient deviation. Some would have you think that I got the weight because I rounded my back and extended my neck; I'd hazard to say that I pulled the weight in spite of it.

But because my body knew how to deadlift with a solid pattern, a bit of inefficiency didn't destroy the effort. The extra "look up" or cervical extension may help, but when you're already in a suboptimal position it's a compensation, not a sound pattern to be trained.

Okay, this seems like a "Hey, no shit" subtitle, but just keep your pants on, there's a point. High frequency deadlifting affected how quickly I adapted to pulling things from the earth, the subsequent motor patterns printed on my brain.

But beyond my solid adaptations of strong grip, tight core, and powerful hip extension, I kept my nervous system excited throughout the training week; a task completed by using neural charge sessions.

In other articles like 5 Mistakes That Killed My Progress, I talk about using neural recharge training to kick my overwhelming caffeine habit. But for the current application, I believe that it was the deciding factor – other than deadlifting everyday – that, for several reasons, made my training successful.

Here are the specific advantages it gave me:

More Time to Focus on Specifics

Before I was consistent with neural charge training my warm-ups were like a first date with a stripper – too damn long. (There's no point in small talking a dame that takes her clothes off for a living.) I wasted precious time on general movement when I could have been spending that time getting better at deadlifting.

Since I was constantly turned on (I'm not talking about boners), I didn't need a lot of work to get my nervous system excited. A little soft-tissue work, a corrective or two and some kettlebell swings and I'm ready to pull. An efficient system requires only small stimulus to prepare for work.

Being in a constant state of neural adaptation drastically upped my force output. No, I don't have a nifty contraption that measures force output, but I felt faster with every weight I touched. I also used the standing broad jump as a force barometer. Over the course of 12 weeks my broad jump increased three inches, from 9'6" to 9'9".

An efficient nervous system promotes intermuscular coordination, which, in turn, leads to better irradiation/co-contraction/whatever word you use to describe high levels of full-body tension. All of this results in higher force outputs with lighter weights, making training with lighter weights more productive and promoting carryover to heavier training.

I've heard a lot of lifters say that they enjoy being sore, that it's reinforcement after a tough training session. I say that shit sucks. I'd further suggest that unless you're training to build mass, being sore all the time is a bad thing – you're offering your nervous system too much to adapt to.

Good sleep and the rejuvenation that accompanied consistent neural charge training allowed me to turn the subsequent training sessions into an artillery barrage.

Near constant nervous system stimulation without exhaustion promotes healing and recovery. That's why Eastern Bloc therapists base their model of treatment on enhancing nervous system tone rather than diddling with silly, uber-specific exercises to rehab injuries, a lesson driven home to me by Charlie Weingroff.

I guess that's why I interchangeably say neural charge and neural recharge. These sessions recharge the body and promote quick recovery.

I'm Off the Sauce!

Like most addicts, I always relapse to the elixir. (I feel like Dave Chappelle in Half Baked when he talks about being addicted to weed.) Caffeine addiction is a bit silly. Nonetheless, neural charge training has kept me from tipping back too much of the caffeine syrup. The power of the nervous system has defeated the power of the mug and can.

I'd be remiss if I didn't, after all this talk, offer you my favorite neural charge workout. You'll need a med-ball, strong lats, and some basic Olympic lifting skills. Behold!

Circuit these movements for fifteen to thirty minutes, resting between exercises until you're fresh. To make these sessions successful, manage fatigue wisely. At no point during or after the session should you feel tired. If all goes well, you'll walk out of the gym feeling awake and set to conquer.

The importance of the lats for building a monstrous deadlift isn't news. What's often misconstrued, however, is how to structure lat training volume as it applies to deadlifting.

Instead, focus lat volume as it directly applies to deadlifting by, well, deadlifting a lot. Sure, keep a few rows and pull-ups in for good measure, but be mindful of their place. Time is better spent on front levers, snatch grip anythings, planches, and the like. All of these exercises create lat tension similar to deadlifting.

Viewed from the life span perspective, three years is a speck of minutia. To accomplish a fitness goal, though, it feels like eternity. Throughout the journey from the mid 500's to the north side of 600 I had plenty of opportunities to tuck my tail between my legs and say screw it. At one point the person closest to me in the world told me I should forget about it and work on a new goal. But I kept a death-grip, and an emotional attachment, to loading 600 on a bar and making it sing.

But that's the beauty of it: it's your goal. No matter how life swirls around you, you'll always have something to focus on that blurs the parts of the world that don't matter. You'll get there, one way or another. Sometimes you just have to be a stubborn mo-fo.

I'm glad I could share these lessons with you, mainly because it means I did something worthwhile. Hopefully their application adds weight to your bar. When it does, slam the bar and scream. 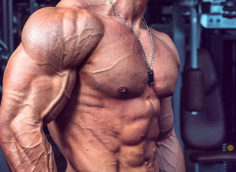