In theory, you do a deadlift simply by picking a weight up off the floor. However, anyone who's spent any time at all above the bar knows that there's an enormous amount of technique involved. Unless you've been coached on how to do it properly, there's a high probability that you'll be making at least one of five common errors.

1 – Setting Up Too Far From the Bar

In order to perform an efficient deadlift, the barbell path needs to be as short as possible from start to finish, and that means travelling in a perfect vertical line. The final position of the bar should be directly over where it was on the floor.

Far too many people, however, tend to stand too far away from the bar. When they pull the bar in a vertical line, it ends up being some distance from the body. The lifter ends up doing an isometric, partial front delt raise instead of a deadlift. This isn't just difficult, it's actually impossible to do with any load that's worthy of being lifted.

Bad set-up. The bar is too far from the body: 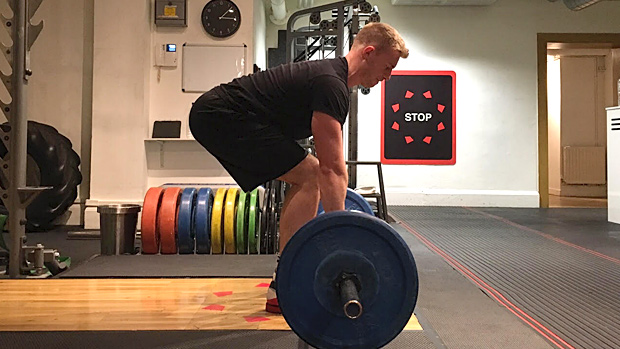 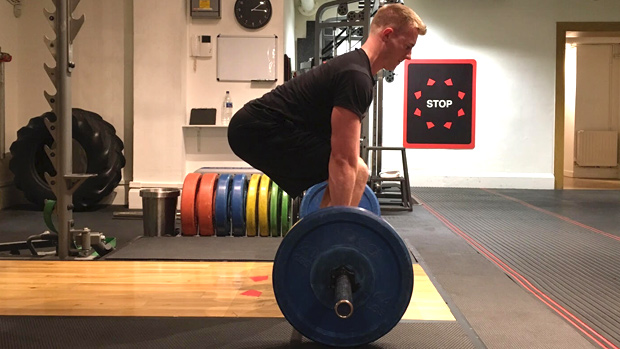 As it so happens, if this error is made during your set-up, there are forces that act on the load in order to return it to the more appropriate line of pull. However, these additional forces are the product of an increased length in moment arm (the length between the joint axis and the line of force acting on that joint) between the hips and the bar. This results in more effort exerted by the body, which is an absolute waste of energy expenditure and will reduce the amount of weight that can be safely used.

Poor bar placement is hardly noticeable with a very light weight, but since very light weights aren't really used for anything, this is an error that should be removed from your set-up very early on, unless you want to be playing with teeny-tiny loads forever.

Take away point: Set up with the bar directly over the middle of the feet.

Attribute this one to beginners who've seen the deadlift performed a few times (probably on the internet) and perceive it as a "squat with the bar in the hands." Their set-up involves low hips and an upright back angle. It also places all of the lifter's body behind the bar, which increases the distance between his center of mass and that of the bar, in turn creating unwelcome leverages. With heavy loads, this leverage will be too much to overcome and the bar will likely remain firmly in place. 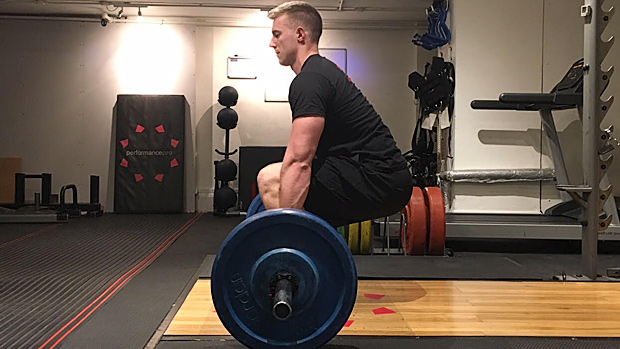 When you see someone attempt to perform a heavy deadlift from a squat set-up, you'll notice that the body reorganizes its starting position before the weight actually leaves the floor. They ultimately end up with their hips higher than their knees and their shoulders in front of the bar, which is exactly where they should've been in the first place.

This adjustment is completely unnecessary, as it brings no benefit to the lift, yet it can be costly in terms of energy output. It's also worth noting that in a properly set-up deadlift, the tension generated by the lats not only allows for force to be transferred from the hips along to the bar, but it also assists with supporting the lower back in extension. But this can only happen when the shoulders are in front of the bar and the bar is directly underneath the scapulae.

So when the hips drop down into the squat position, the more upright back angle decreases the angle of the lats relative to the humerus, which increases their "slack" and prevents them from doing their job properly. The brief moment it takes to re-adjust body position from an incorrect set-up may not allow enough time for the lats to generate maximum tension, which means they may fail to do their job properly in supporting the lumbar spine. That is a definite recipe for lower-back injury.

Take away point: Set up with the bar behind the shoulders and directly underneath the scapulae. Make sure that the hips are higher than the knees.

3 – Neglecting to Take the Slack Out of the Bar

If a lifter doesn't pull the bar up so that it's making contact with the top of the rim in the hole of the plates, he's initially not going to be working against any resistance. By not working against any resistance, it's extremely difficult to produce an isometric contraction in the spinal erector musculature and the lats that's strong enough to lock the lumbar spine into extension during the movement.

Incorrect Form: Slack Not Taken Out

It takes 0.4 to 0.5 seconds for the average person to generate maximal muscular tension (0.25 seconds for well-trained athletes), so if the lifter attempts to "jerk" the weight off the floor as quickly as possible from a relaxed position, he's not providing enough time to produce the necessary lower back stiffness. The end result is needless lumbar flexion as soon as the bar begins its journey against gravity, which can then lead to complaints of "hurty back syndrome."

Take away point: Once you've set up properly, the last thing you should do before lift off is to pull the chest up as high as possible, making sure you simultaneously pull the bar up as hard as you can against the weights. On some plates, there's a small gap between the bar collar and the top rim of the hole – listen for the telltale "clink" as they make contact and then hold this position for a brief moment before lift-off.

4 – Losing Back Angle Before Lift Off

Incorrect. Knees have extended before the bar has left the floor: 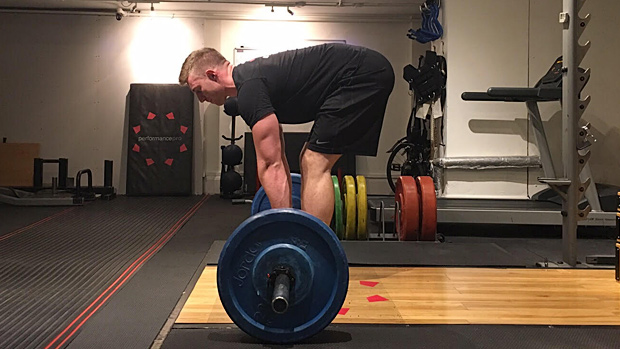 Correct. Keep back angle constant until the bar has cleared the knees: 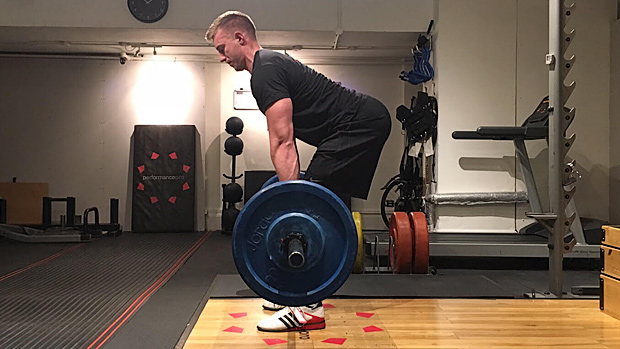 With straight knees, the quads are now unable to contribute to the lift off, so the entirety of the work has to be performed by the posterior chain, and through a much greater range of motion. This turns the lift into a Romanian deadlift from the floor and the increased demands on the posterior chain lead to much greater stress on the lower back, which can lead to premature fatigue and either a weakened lift or a bout of back pain.

Take away points: The back angle should remain the same when the bar leaves the floor, which is initiated by extending the knees.

5 – Hyper-Extending the Low Back

The finish of the deadlift should be marked by a solid hip extension, which is created by the hips thrusting forward until the bar physically stops them from travelling any further. Many lifters, however, continue on by hyper-extending the lumbar spine at the expense of the hips. This is a completely unnecessary and useless addition to the deadlift. Remember that the lumbar spine should be locked into extension from the set up and remain that way until the end of the lift. 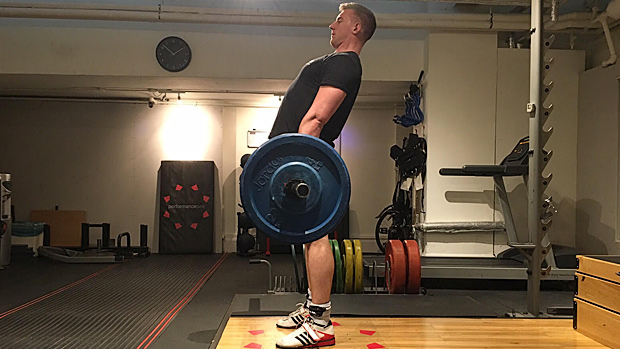 The muscles responsible for holding this position do so with an isometric contraction. As such, the shape of the lumbar spine has no need to change during the lift. In some cases, the trainee may simply be unaware of how to properly use his hips during the deadlift, so he resorts to what's more familiar i.e. hyper-extending the low back.

In other cases, the glutes may just be too weak to finish the movement, so lifters rely on using their lower backs excessively to help complete the lift. In either scenario, using less weight and/or going over technique will help to reinforce the correct movement pattern and stop this monstrosity from ever happening again. If not, the added lumbar stress will one day catch up with them.

Take away point: Finish the deadlift with strong and powerful hip extension. Stand tall and resist the urge to lean back.

In the fitness and bodybuilding communities, upper back and neck strain are as chronic and irritating as AM talk shows.
Training
Don Alessi June 28

A new way to organize your workouts to quickly boost a lagging lift or stubborn muscle group.
Bodybuilding, Powerlifting & Strength, Training
Charles Staley August 2
Note: While this article is geared toward teenagers, the info that it contains will be helpful for anyone who's new to weight training.
Training
Chris Shugart September 3

The lifting greats knew how to get strong long before drugs and long before science came along to prove their methods. Here are their best secrets.
Bench Press, Deadlift, Powerlifting & Strength, Training
Christian Thibaudeau December 8