Back in the article Sure Fire Fixes for Weak Points: Biceps four Testosterone coaches weighed in with some foolproof fixes for anemic biceps.

Yet for the majority of bodybuilders who've been told by judges, peers, or spiteful ex-girlfriends that their arms are a weak point, it's usually the triceps that's the major issue.

It's easy to see how sub-optimal development can greatly affect the overall appearance of the arms. The triceps make up roughly 2/3 of upper arm mass, and when sufficiently developed are damn near impossible to conceal, whether on-stage hitting a side-chest or front-double biceps pose or squeezed into an otherwise well-fitting T-shirt.

So with so many benefits to the aspiring bodybuilder, why are weak triceps ever an issue? And if you have the elbow extensors of an out of work Abercrombie model, what can you do to fix them?

We asked some of Testosterone's resident experts for advice.

Luke Leaman is a strength coach and personal trainer from Austin, Texas who works with athletes, physique competitors, and regular Joes.

Leaman says that while a weak-point routine for the triceps might vary depending on the person and his or her level of development, he has one golden rule that never changes.

It may be a pain in the ass and a nightmare to schedule, but if you want the best results as fast as possible, there's just no better way."

A Workout: AM – Heavy Pressing

B Workout AM – Cables

"But it's easy to overdo it, so I'd omit the evening workout every 3rd week."

As far as nutrition is concerned, Leaman says it would depend on the client's current body fat level, but one thing this kind of training volume requires is calories, and lots of them.

"I would opt for lots of post-workout carbs so the client can recover, no matter how fat they are. Supplement-wise, Beta-Alanine and to creatine are a must, along with doubling their multi vitamin. I'd add extra zinc, magnesium,and vitamin D as well.

It's not an easy routine or an easy schedule, but guys never seem to complain after they've added an inch to their triceps," says Leaman.

Contreras argues that any discussion of bringing up lagging triceps must begin with adding overall mass to the frame.

"Many experts claim that you need to gain 20-plus pounds of muscle in order to grow an inch on the arms, and there appears to be some truth to this claim," says Contreras.

"I'm not saying it's not possible to beef up the arms without gaining any weight, I'm just saying that it will take much more time.

The body does seem to like to grow in proportion, so getting stronger at basics like squats, deadlifts, bench presses, close grip benches, military presses, and dips and is a good idea," he says.

However, Contreras is quick to point out that the isolation movements still have their place, especially when the goal is to target a specific weak point.

While the hardcore among us may scoff at the very mention of the word 'isolation' or 'cable,' Contreras reminds lifters not to forget about that often-overlooked fixture in bodybuilding folklore: the pump.

"Research lends some support to the benefits of getting a good pump on muscle growth, as hypoxia and occlusion seem to aid in hypertrophy.

Some have even gone so far as to suggest that the pump can aid in fascial stretching, which is the 'limiter' of hypertrophy, although I have to say that claim is highly suspect," he says.

So with all that in mind, what is Bret Contreras' prescription for stubborn triceps?

"I would say the basics three days a week: Squatting, pressing, dips, etc. with mostly low reps. I would also include heavy deadlifting once per week.

Once the basics are covered, I'd incorporate some higher-rep triceps isolation work at least twice per week, after the basic upper body workouts. Use the variations of the cable extensions I listed earlier and go for the pump, focusing on feeling the movement every rep.

Combine this with a good diet and there's no way you can't grow."

Despite not being a bodybuilder, Tim Henriques knows all about battling weak triceps. Except in his case, the competitive powerlifter and strongman suffered in the power rack, not the posing dais.

"Triceps have long been my nemesis," says the director of the National Personal Training Institute of Virginia. "I've pressed several competition benches up almost to lockout only to fail just a few inches from the top, which is annoying to say the least."

Henriques says he's had to work hard to get his triceps up to a level where they weren't consistently sabotaging his competition lifts, and the lessons he's learned in his battle can easily help you.

"If you want big triceps, first and foremost you need to improve the long head of the triceps," says Henriques. "It's the largest and longest of the three heads, and it accomplishes both shoulder extension and elbow extension."

Although isolating one head completely over another is not possible, it is possible to preferentially recruit one head over the others by manipulating body and elbow position.

According to Charles Poliquin, the further away the arms are from the belly button, the more recruitment there is of the long head of the triceps. Exercises that would fit this definition are triceps extensions performed on an incline and the overhead triceps extension.

Another trick Henriques likes to use with triceps is to play with training frequency. "I like to play with blasting them twice a week for a month or two, just to give them a little shock," he says.

Here's what coach Henriques' twice-a-week triceps routine would look like:

* Barbell holds are sometimes called barbell lockouts. Get set like you're going to do a bench press, lift the weight out of the rack (a lift off is okay) and hold the bar in locked out or near locked out position for the time given, and then re-rack it.

* * Triceps pullovers are a type of lying triceps extension where the dumbbell or barbell is allowed to extend past the head in the bottom position, thereby placing the long head under a significant stretch.

While the volume may seem a little high, Henriques says that's okay for a blast phase, and it won't be forever. "After a month or two at most, I suggest heading back down to once a week to allow super-compensation to occur," he says.

Henriques also cautions to warm-up the triceps considerably before trying this type of routine. "The triceps have a huge tendon that doesn't get good blood flow," he says, "so I often suggest a few sets of light triceps pushdowns for 20 reps or so just to get the blood flowing."

"Feel free to follow these days up with some good stretching," adds Henriques. "You could even try some extreme stretching DC-style (DoggCrapp) if you think the fascia is tight." 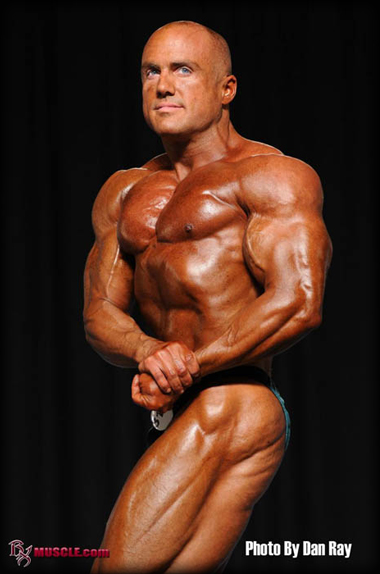 Physique coach and nationally ranked bodybuilder Shelby Starnes knows all about stubborn triceps: they're among the most requested bodyparts that aspiring bodybuilders who hire him are hoping to improve.

Interestingly, while many bodybuilders and physique athletes will break out of plateaus by switching from higher rep "hypertrophy" training to more lower-rep, strength-based work, Starnes takes a different approach with triceps.

"In my experience, arms and triceps in particular tend to respond better to a bit higher rep, more 'pumping' type volume than larger bodyparts like back, legs, chest, etc.," says Starnes.

"So for triceps, try doing things like supersets and giant sets to really pump them up maximally. Start with a contraction movement like pushdowns, and end with a stretch movement like triceps extensions.

This will also help keep your elbows healthy," says Starnes.

Starnes also suggests employing a little bit of old-school bro-wisdom sure to make the functional zealots stumble in their Vibram Five Fingers: try training triceps on their own day, separate from chest and shoulders.

"Pair them with biceps, their antagonist bodypart. Either superset biceps and triceps exercises, or try training biceps first (maybe 3-4 exercises, 3-4 sets each), then moving on to triceps.

You will find that you are stronger than normal on your triceps exercises, due to reciprocal innervation," says Starnes.

Warm-up: Rope pushdowns 3 sets of 12 reps, then the following tri-set:

B1) Skullcrushers/lying extensions 10 reps (keep elbows in, and stretch at bottom)
B2) Seated overhead dumbbell extensions using one dumbbell 8 reps

Four coaches, four radically different approaches to bringing up weak-sauce triceps. Do their recommendations have anything in common? You bet:

• Change your programming. If you've been doing a lot of isolation or cable work for reps, start doing heavier work with basic exercises. Better still, steal some tricks from the powerlifters (who often have incredible triceps development) and start doing board presses, floor presses, and seated half-presses, all for multiple sets of low reps.

• If you're already a basic and heavy kind of guy but have triceps that lack balance or detail, start performing some isolation work for reps. Cable movements, specifically cable extensions with a full stretch to engage the long head, are a great plateau buster.

Triceps pressdowns with a rope are an elbow saver when performed before heavy triceps work.

• Don't be scared to play with your frequency. Try switching from once a week to twice a week. Try adding in an "arms days" with another triceps session after chest or shoulders work. If you're really serious, try Coach Leaman's "twice a day, twice a week" routine. Maybe six weeks of high volume and a variety of stimuli is what you need to pummel your triceps into growing again?

• Dip, bench press, and shoulder press. Squat and deadlift, too. You'd be amazed at how often "weak" triceps suddenly start to grow when you become a technically sound presser and add a few plates to your bench and pounds of beef to your frame.

In other words, a "triceps specialization" block when you get squashed like a bug under a 225-pound bench press is just plain silly.

• Play with high volume "pumping" routines. We all like to snicker at some of the Weider Wisdom espoused by Joe back in the Muscle & Fitness glory days, but making a "mind-muscle connection" is no joke.

There's considerable evidence, both scientific and anecdotal, that stubborn bodyparts are often the same ones we can't "feel" working. Next triceps workout, try to change that. Squeeze each contraction. Control the negative, keeping tension on the muscle like a loaded spring.

Of course, this requires that you have a decent set of deltoids and triceps to begin with. Please don't make achieving this coveted physique tie-in your number one goal if your shoulder width resembles a coat hanger.

Truth be told, overcoming any stubborn weak point rarely requires a complicated or space-age approach. Often, just a little nudge – a bump in frequency, a switch in exercises, a change in rep ranges – is all that's needed to coax gains from otherwise hibernating muscles.

The key is changing something. If what you've always been doing was going to work, it likely would have worked by now. Stop waiting patiently for gains to magically appear and take control of the situation, and start making your weak points a thing of the past!

Think you're ready to sprint? Don't be so sure. Toughen up your hamstrings first. Here's how.
Sprinting, Tips, Training
Dean Graddon April 23

You can get sore and not make progress. And you can make progress and not get sore. Here are the facts.
Tips, Training
Christian Thibaudeau December 20 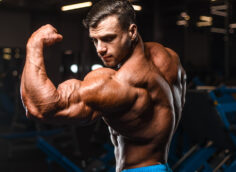