This training plan can be done without any special equipment. It's a twice-weekly program beginning with isolated neck exercises followed by more integrated exercises.

The goal? To build a strong, muscular neck. You'll "thicken the cylinder" and improve resilience.

First, we'll go over the exercises, and then I'll lay out the program.

Protraction is a combo of upper neck extension and mid/low neck flexion. This funny-looking exercise targets the sternocleidomastoid muscles (among others), which cut diagonally up and back from your upper chest and collarbones to the back of your skull.

Your forehead stays perpendicular to the band, which minimizes shearing or sliding of the band.

Retraction is a combination of upper neck flexion (think double chin or chin tuck) and mid/low cervical extension. I recommend this seated version. The upper-back support localizes the movement to the neck.

You're 40-50 percent stronger in retraction than protraction. Using a significantly thicker band (with less stretch applied to it) is more comfortable.

Credit to Coach Mike Gittleson for this upper trap exercise. Traditional shrugs are done by bringing the shoulder up toward the ear, but this requires a larger range of motion.

Done correctly, this shrug allows for a small amount of neck movement. This occurs naturally with a strong contraction of the upper traps. Just don't cut the rep short. Don't intentionally move your neck; just focus on lifting the weight as high as possible and simply allow your neck to move.

Start with two-thirds of the weight you'd typically shrug for moderate reps (8-12) with one arm. Or, if you normally shrug 150 percent bodyweight with a traditional barbell (both arms), start with 50 percent of your bodyweight in one hand. A dumbbell works well, but a heavy kettlebell works best.

Traditional shrugs target the upper trapezius and levator scapula. Both attach to the cervical spine. One study showed that the unilateral shrug was superior to nine common exercises for increasing muscle activity in the upper traps. This is a simple alternative to the seated shrug machine.

(If you don't have straps, holding the thick sleeve of an Olympic barbell builds serious grip strength.

The major problem with traditional floor-based neck bridges is decreased load on the target muscles at the top and bottom positions. Plus, floor bridges are just uncomfortable.

Although it might take a few sets to get used to it, this can be a comfortable way to load the front of the neck and the entire anterior core.

This adds hip drive to the traditional standing barbell shrug, allowing you to overload the shrug.

Once you learn the technique, your working sets should be heavier than you can shrug with strict form. Since you're not specifically using this shrug to improve the Olympic lifts, feel free to use a trap bar, which eliminates the body drag of a traditional barbell. Use straps if needed.

It's been attributed to legendary coach Bill Starr. This shrug trains the negative/lowering phase of the exercise. Heavy negatives create a potent stimulus for strength and hypertrophy. To get the full benefit, lift heavier than a traditional barbell shrug.

Once you get the mechanics down, you should be able to load this 40-50 percent heavier than traditional barbell shrugs. Grip shouldn't be the limiting factor, so use straps.

Do we need to periodize neck training? Probably not. But since it's a region of the body many don't train, some long-term planning is useful.

Train your neck twice weekly on non-consecutive days. Intensity (resistance/load) should be higher in your second session than in your first. Take all exercises close to technical failure.

Once you can complete the prescribed volume without reaching this high level of effort for two sessions in a row, it's time to progress intensity.

You're probably thinking, "I push, pull, deadlift, squat, and shrug. My neck is plenty strong from these exercises." Unfortunately, you're likely wrong.

The fact is, traditional compound exercises on their own aren't terribly effective for increasing neck strength and size (6). Adding direct neck training is the best practice.

The neck is a major area of disability. From cervicalgia ("neck pain") to whiplash, I've seen enough neck problems to say with confidence that the neck is worth attending to.

I'm a recovering "pencil neck." I'd battled an ectomorphic genotype my entire life and figured that the neck was something that couldn't change.

Fast forward to 2020. I was hit by a vehicle traveling at highway speeds. After the airbag dust settled, I was surprised to have suffered no injury – not even a neck ache. I attribute this to my regular neck training.

Here's a deeper dive if you want to geek out and understand why the program above works so well.

The neck (or cervical region) is made up of seven vertebrae, their intervertebral disc joints, and many specialized synovial joints.

All the neuro-vasculature servicing the brain and entire body travels through this region. Additionally, specialized glands and organs are housed here. Muscles of the neck are rich in proprioceptors, which are sensory structures that inform balance, coordination, and orientation of sensory organs and orifices of the head. There's a lot going on here.

Traditional strength training principles can be applied if you have a little anatomy knowledge, just like any body part. The action of a muscle is determined by the relationship between its "line of pull" and the joint(s) it crosses.

Nearly all neck muscles have a line of pull either in front of or behind the joints of the cervical spine. This means that we can train virtually all muscles of the neck with combinations of resisted flexion or resisted neck extension.

Can certain muscles be more effectively trained with resisted side-bending or even resisted rotation? Certainly, but I recommend flexion/extension-based exercises for the average lifter who doesn't engage in contact sports.

The program above emphasizes protraction and retraction, which are neck movement patterns that combine flexion of part of the neck with extension of another part. Performing protraction maintains the moment arm of the resistance, ensuring the exercises don't become "too easy" at end-range.

Additionally, resistance from the elastic band is applied perpendicularly to the part of your head in contact with the band, which minimizes sliding. So these protraction and retraction exercises are more effective and more comfortable than traditional, pure flexion and pure extension exercises.

Notable neck muscles include the upper trapezius and sternocleidomastoid. These muscles are superficial. They reside toward the surface of the neck. So they have disproportionate effects on overall neck strength and appearance.

This simple plan involves "sneaking up" on reps in the pull-up. It just takes a few minutes per day. Check it out.
Tips, Training
Dan John May 3 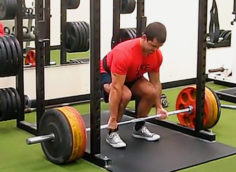