That question pops up on forums all the time. The answer? Yes, you should train!

This article will reveal the benefits of training while having a cold and why you might even get the best workouts of your life! In addition, I'll reveal some strategies for cutting the timeframe of a cold in half. Let's get started.

3 Reasons to Train When Sick

Usually when people catch a cold, they really get into it. They start walking around like death, put their sick clothes on (you know, nasty pajamas, etc.) and sit on the couch all day watching truck driving school commercials and talking to anyone that's willing to listen to their sob story.

To make the experience more memorable, medications are taken by the fistful until the symptoms start declining. The fun usually lasts for a couple of weeks and then you start feeling like your normal self again. While I realize that many people enjoy being sick and derive pleasure from the attention that often comes with it, there's a better way. While it may seem counterintuitive, training while sick can be advantageous for three reasons:

1) It helps you get over a cold faster. Top strength coach Bill Starr states that training while sick "...helps flush useful healing nutrients through the body and aids in expelling toxins." In other words, training helps purge your sick toxic body and will get you back to normal faster.

2) You'll find that you're actually stronger when training while sick! How's this possible? Starr stated the following to one of his athletes, "I explained that when he got sick, his immune system released antibodies in profusion to combat the invading toxins and microorganisms. Those antibodies are strength enhancers. This is especially true in the early stages of any illness."

Remember how empowered you felt afterwards? This feeling of empowerment is the third reason why training while sick is productive.

3) Sitting around and being miserable gets you further into the role of a victim. You admit to yourself that you're powerless and act accordingly. Be a man! Take charge of the obstacle and blast through it.

Even if you don't get a great workout, just doing something positive when you feel negative will give you a sense of control, which can't be overlooked. Time to relinquish the modern trend of being a victim and blaming others for your problems. Be a revolutionary and actually take charge of the situation!

How to Train When Sick

Different rules apply to different illnesses, so continue reading before you make the mistake of doing the wrong workout for your situation.

All kidding aside, let's get more specific. If you have a cold in which your symptoms are sneezing, coughing and a runny nose, then you should be able to do some low volume strength training sessions. While you'll find that you can lift heavier weights than normal, you'll probably find that your muscular endurance is compromised. Now is not the time to try out high volume programs such as German Volume Training or Charles Staley's Escalating Density Training.

However, it's a great time to try some lower volume program such as Pavel Tsatsouline's 5x5x5 program. Here's how it works. Pick five compound exercises such as incline press, weighted pull-up, deadlift, hanging leg raise, and barbell squat. Do one set of five for each exercise five days a week. Pick a weight that you can do seven reps with, but only do five reps per set.

Take a three to five minute break in between each exercise. Increase the weight at each workout until you're doing a limit set towards the end of the week. (A "limit set" is one in which you can't do more than five reps.) Don't, however, train to failure. Make sure that you pick a weight you can nail five reps with. You want to leave the workout feeling empowered rather than defeated.

To really take advantage of the strength increases that come with a cold, try doing 5x3x5 instead. In other words, do five sets of three, five times per week. Start with your five-rep max, but only do three reps per exercise. Over the course of the week, gradually increase the weight until you're nailing a new PR on day five. Adjust your training for the following week based on your new five-rep max.

If you don't feel like doing short workouts daily, then try doing three full-body workouts per week and do two sets of three to five reps per set. Here's a sample training program:

Do one set of three on each exercise and take three to five minute breaks in between each drill.

A-1: Bottom Position Bench Press
A-2: Barbell Bent Over Row

Same instructions as A-1 and A-2. Rest another minute and then wrap the workout up with:

The above is just a sample program. Feel free to modify to suit your needs. For example, replace the bench press with the standing military press or weighed dips. The possibilities are endless; just focus on compound movements with low volume and fairly high intensity. Avoid training to failure, but feel free to go to your limit on the second set of each exercise.

Important Rules For Training When Sick

While strength training can be very beneficial when you have a cold, training with some serious flu symptoms such as impaired breathing can be a mistake. If that's the case, forget about training. A few years ago, I caught the flu and made the mistake of continuing to train hard, regardless. As a result, the flu eventually became pneumonia and went on to become very serious. One of my lungs got completely filled up with bacteria and breathing became so impaired that walking up a flight of stairs took serious effort.

However, this doesn't mean you should sit around like a couch potato watching re-runs. Go for walks every day to get some fresh air and do some light bodyweight training to enhance the immune system and provide a feeling of empowerment. Just don't do anything taxing that'll hamper breathing.

Other Things to Consider

Besides appropriate training, there are a few other things you can do to speed up the healing progress. One effective method for kicking a cold fast is to use a dry sauna for twenty to thirty minutes a day.

The best time to use a dry sauna is after training. The sauna will build up a sweat and supposedly expel the toxins from your body faster. I really believe you can cut the time of a cold in half by using a dry sauna. Just make sure you're not exposed to cold air after using the sauna. Take a shower afterwards, get dried off quickly, and get a nap in. You'll be amazed at how much better you feel.

Massage therapy is another effective method, but not a cool thing to do to the therapist that's working on you, as he or she will most likely catch whatever you have. However, if you happen to know a massage therapist you don't like, now is a perfect time to share the love.

Finally, I've found that a homeopathic remedy called Zicam is great for speeding up the life and death of a cold. Get the nasal one and spray it in each nostril several times per day. Don't freak out when your cold symptoms temporarily increase. Your nose will start running more and you'll probably sneeze more right after you take Zicam. No big deal, the product is just speeding up the cold and getting it out of your system.

This is the basis for homeopathic medicine, which isn't just for people that have lots of crystals in their home and enjoy listening to Kitaro. Suck it up and deal with the temporary misery. You can get Zicam at RiteAid or Save-On.

No one likes catching a cold or getting smacked with the flu. Regardless, it happens from time to time to the best of us. Nevertheless, you don't have to take it like a victim. Take charge of the situation. Again, if you're fighting off a cold, it's likely you'll find that you're stronger and may even hit some new personal records. Sounds crazy, but it happens.

Ironically, you'll probably find that you're weaker for the first week after you recover fully. My theory is that the body released a lot of antibodies to fight off the cold, putting you into an imbalanced state. Once you fully recover, your body goes the opposite direction and then eventually comes back to normal.

Use the week that you recover from a cold as a back-off week. Reduce the training intensity so you're in the 70% range and keep the volume moderate. The week after the cold recovery period, you should feel strong and ready to go.

Instead of getting down the next time you catch a cold, get excited as you might have the best training week you've had in a long time!

Fire, wood, earth, metal, water. What “type” are you when it comes to natural strength and the ability to build muscle? Find out here.
Bodybuilding, Powerlifting & Strength, Training
Charles Poliquin March 14 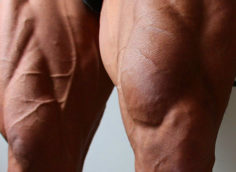 A new study shows how you can use ordinary elastic knee wraps to build your legs like never before.
Bodybuilding, Legs, Tips, Training
Mitch Calvert December 2

Q & A with one of the world's premier strength coaches.
Bodybuilding, Powerlifting & Strength, Question of Strength, Training
Charles Poliquin December 24