I've received many questions about how I handled my recent shoulder rehab. While in no way am I qualified to dispense a rehab protocol to anyone – I'm not a doctor or physical therapist – I will share the approach that worked for me.

Still, I ask that you take what I'm about to say with a horse testicle-sized grain of salt and get your aches and pains checked out in person by someone legitimately qualified. I want to make this very clear as there are too many unqualified people in this industry that deem themselves rehab experts and do so without any sort of responsibility to what they prescribe.

So what made me decide to handle my own rehab? First, the closest therapist that I felt comfortable visiting was a pain in the ass to get to. I live in a rural part of Ohio and sitting in morning traffic (or any traffic) is not how I want to spend any portion of my day.

Second, I wanted the challenge.

Before the surgery, I spent a couple of months researching through the internet and talking to others who had shoulder surgery similar to mine (labrum and rotator cuff repair).

I printed off everything and anything I could find and highlighted similarities. Everyone had a slightly different spin on the rehab but there are always going to be things that are similar. These were the things that I was most interested in.

When talking to people who had similar surgeries and rehabbed them, both successfully and unsuccessfully, I found a common theme – and this was the mantra that kept my head on straight during the entire time (and still does today):

What this means is there's no medal, reward, or honor in being the first to bench press 315. Your body has to be given the chance to recover and repair itself. Rushing through and accelerating the rehab process isn't going to make the problem heal itself any quicker.

Take it slow in the beginning and let the surgeon's work do its job. There's plenty of time to press after it heals. Try to be Superman and chances are you're going to end up back in the operating room.

About a month out from the surgery, my wife helped tweak my diet to remove some of the inflammatory foods. I felt that this was going to give me a leg up on my recovery and instill some good dietary habits. I stuck to a very simple diet that most of you are familiar with: grilled chicken, steak, rice, and vegetables. I did enjoy a few cocktails but those were cut down dramatically. I'm no saint.

My supplements were also chosen to help my recovery but again, nothing revolutionary. I took Flameout®, Vitamin C, a multivitamin, krill oil, ubiquinol, and astaxanthin. I took these supplements with every meal. This was at my wife's suggestion and it seemed to help the recovery process.

The final thing that I did before my surgery was make a pact with myself. "Nothing stupid for 4 weeks." This was very hard to do because there are many days that you feel great and think you can push it.

But I had a good support system that kept my head on straight. Both my wife and Will Ramsey (whose dad is an orthopedic surgeon) kept me honest and reminded me daily to never get too far ahead of myself.

Finally, and most importantly, I wrote down goals. This helped me guide my rehab every step of the way. If you don't know where you are and where you want to go, you'll just wander aimlessly through life. So I had to have concrete goals and an honest assessment of where I was.

The simple goal was to be able to press overhead and bench press pain-free. But really, that wasn't going to cut it for me. You need to have actual performance goals, or at least I do, to make it worthwhile. 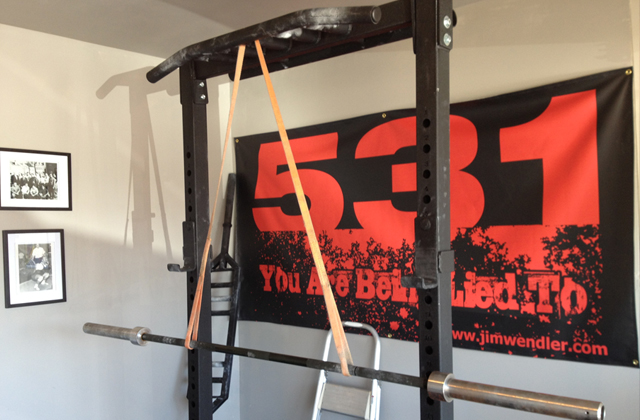 These weeks pretty much sucked. I slept in a chair and was given a pain killer regimen that would've made a rhinoceros loopy. Sleeping in a chair, even a huge, comfy chair, is not comfortable. I spent most of every night listening to music and watching movies. I made sure to order every movie station that was available to me and caught up on some of the worst movies known to man.

During these weeks I did the following rehab:

This was done three times per day for 1-3 sets of 10 reps in each direction and started the day after the surgery. During the first two weeks, the motion is pretty limited so don't get discouraged. Do not take it too far.

Most therapists recommend you stay in the sling for 6 weeks. At about the 5-week mark I spent half of my day out of the sling. My shoulder felt fine but I also didn't want to take any chances.

I also made sure to sleep in my sling, although I was out of the chair and back in my bed. I didn't want to sleep on my shoulder the wrong way and screw it up. The icing continued but was lessened to 3 times per day. Diet and supplementation continued.

During these weeks the following rehab was done:

On my chin-up bar, I hung a sled strap that has two looped ends. Through these looped ends, I hung a 45-pound barbell. (See pictures) 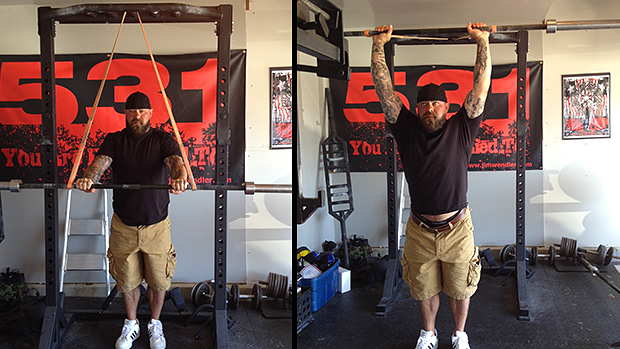 I grabbed the barbell with a narrow grip, flexed my triceps, and walked forward until the barbell was overhead. I pulled the barbell overhead and squeezed my traps and held it there for a few seconds before slowly returning to the starting position, making sure to keep the triceps flexed and arms locked.

I continued to use the safety squat bar for lower body training. I didn't do anything too heavy or hard during this time.

At this point my shoulder could move through a full range of motion pain-free and I knew it was time to start training again. But I wasn't about to start maxing out and killing myself.

The cambered bar is a slightly cambered squat bar that allowed me to squat with no shoulder discomfort. While the safety squat bar was good, it never feels like a true squat to me.

Using the 5/3/1 program, I began training with a ridiculously light training max. I used 95 pounds as 65% on my bench press, thus giving me a training max of 145.

With the standing press, I just used the un-weighted Swiss bar for sets of 5 reps until I felt comfortable.

After a few weeks, I noticed that my form wasn't great on either lift so I took a step back and made sure that each rep I did was complete. I paused at the top and bottom of each rep, not caring about the quantity of reps, but rather the quality of reps. Since I adopted this, my shoulder has gotten much better. This made me realize that 5 great reps are better than 10 fast, sloppy reps.

My pressing was done as perfect as I could – pressing the barbell overhead and pulling my head through. The bench press was done with a slight pause at the top and the bottom.

Yeah, yeah, I know, this is shit that we're all told a million times when we first start lifting. But the quest for more reps or more weight makes it easy to cheat. Then you get hurt and realize you should've listened.

I also began doing chin-ups. The first couple of times, my wife held my feet to take some of the load off. But after a couple sessions, I was able to do clean sets of 5-10 reps, meaning the reps were done with a full pause at the bottom and a strong finish at the top.

I did chins 2-3 times per week. There was no leg swing, half reps, or "kipping" – the reps were done with purpose (like you're supposed to do). Leave the heroics for the wannabe's.

Deadlifts were done very light and all with a double overhand grip, with straps. This lasted about a month, until I felt that my repaired shoulder could handle the supination.

I tried squatting with a straight bar and it felt okay but the cambered bar is still used to remove any chances. I'm in no rush. I still use the Swiss Bar for all pressing movements and will continue to do so. Whether I go back to a straight bar is entirely based on if I'll ever compete again. At this point, that's not on my radar.

It's now about 6 months post surgery and I have the following numbers to my name:

All these lifts were very easy and I could've done more, but I have more goals to conquer and plenty of time to reach them. I have goals set for September and for the end of the year. I have no doubt I'll reach them as the plan that I laid out is simple and precise.

If you get anything out of this article, please take this to heart: have a goal, have a slow, methodical plan to get there, and be patient. You'd be surprised at what happens when you make this a cornerstone of your life. 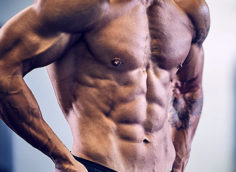 This little-known exercise will not only build your lats, it'll make you a better deadlifter and Olympic lifter. Here's how to do it.
Tips, Training
Christian Thibaudeau February 3 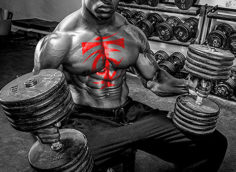 Want to design your own kick-ass training programs? All you need is the perfect template based on 20 years of trial and error.
Bodybuilding, Training
Clay Hyght, DC December 17