Talk to a power or strength athlete and ask him what muscles need to be really big and strong in order to be strong all over. The most common answer will be “back.” Can’t argue with that. The back is responsible for supporting a heavy squat and picking up a heavy barbell.

But glutes should be second on that list. If you’ve got a big back and a strong pair of glutes sitting under it, you’re going to be capable of lifting some heavy-ass weights. Not only that, but weak glutes can be the root cause for hip and knee pain.

Why Bros Don’t Train Their Glutes

Guys seem to think that all you need for a set of developed glutes is the squat. But the squat, for most people, isn’t a great glute developer.

In every study where they’ve looked at glute activation compared to quad activation, it’s the quads that are doing the brunt of the work. This doesn’t mean that some people don’t get great glute development from squats alone. It just means that those people are exceptions, not the rule.

Also, the most common movement for glute training currently is the barbell hip thrust. And some guys are still averse, maybe because they think it’s a ladies’ exercise. If you look through social media and go digging for hip thrusts, you’re gonna find a female doing them 99% of the time.

But if you take a deeper look you’ll also find some certified real-bros like Dwayne Johnson, and former NFL mean guy, James Harrison, doing them as well. 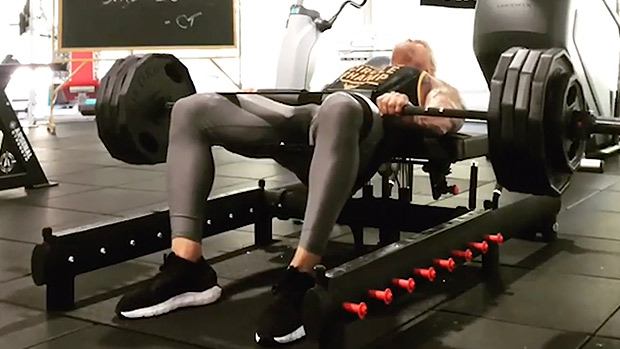 So if you’re a bro and you want to build some big glutes, just load up a barbell with as much weight as possible and start mimicking The Rock, right?

Well, not so fast. Building glutes isn’t about going as heavy as possible as soon as possible. It’s more about feeling the muscle work. Here’s how to begin building your dude glutes.

There are two benefits that make this a great addition to glute training:

Because loading on this version isn’t conducive to chasing progressive overload, it works more by helping to establish mind-muscle connection and closing the gap on imbalances. This makes it a great prehab exercise as well.

Start with bodyweight for the warm-up set and hold the top portion of the movement for 3 seconds before lowering back down. One set of 20 reps should wake your glutes up properly. Consider keeping your toes off the floor and allow natural external hip rotation during the lifting (concentric) portion of each rep.

You can use an EZ-curl bar, a short straight bar, or even a standard plate for the loading. Do 4 sets of 12-15 reps, then move on to the big stuff.

The problem with squats is that the top quarter of the range of motion (when you go into hip extension) is basically devoid of any resistance for the glutes. This is why glute activation measures are consistently higher for people in the hip thrust than the squat. The glutes are maximally loaded in the shortened position in the hip thrust.

What I like about the banded landmine deadlift is that you’re using a somewhat modified sumo deadlift stance, which means you’ll naturally be executing with the hips externally rotated. You can’t get the glutes fully shortened without external hip rotation.

Since we’re adding accommodating resistance (bands), we’re making sure there’s no “dead area” within the range of motion – there’s no area during hip extension in which the glutes don’t feel resistance.

This is a great exercise for chasing some rep PR’s. I can promise you that knocking out a brutally hard set of 15-20 reps on these will smoke the entire lower body, especially the glutes.

We’ve covered mind-muscle connection and progressive overload. The next step is getting tension on the muscle at different lengths.

This is why bodybuilders often talk about “training the muscle from different angles.” What that really means is, you’re stressing the muscle at different lengths by using exercises that have varying resistance and strength curves.

There’s a couple of ways to eliminate the dead area within a range of motion of a movement. One is to add accommodating resistance like bands or chains. The other is to simply pair one exercise with another exercise, or potentially two other exercises in a giant set. The key is to make sure the resistance curve is different in movement pairings.

That’s what’ll happen with the bottoms-up RDL. You’re going to start with dumbbells to stress the glutes from the bottom of the range of motion. There’s virtually no tension or resistance in the top half of the ROM with this movement when using a barbell or dumbbells. Because of that, we’re not even going to come all the way back up.

You’ll descend into the bottom of the RDL and come part-way back up to make sure and work within the active range of motion.

You’ll immediately switch to the low cable and do RDL’s from there. You’ll need to be far enough away from the machine to stress the glutes in the mid-range portion of the movement.

From there, move to a higher cable setting, which will work the top half of the range of motion, keeping a tremendous amount of tension on the glutes while they’re in full hip extension.

The lunge can be loaded heavily, but I don’t like to use it that way. Instead I recommend it as the metabolic stress portion leg/glute day where you try to blitz the entire lower body with bodyweight-only reps.

There’s a multitude of ways to include these movements in your training. You could use them all and make the entire training session centered around glutes, or you could mix and match them with your core lifts. For the mix and match version, use a rotation of your main lifts and build your glute work in front and behind that.

Okay, so this isn’t just for dudes. Anyone can use this to build bigger and stronger glutes. But the dudes should pay attention to their glute training because more junk in the trunk will mean less pain, fewer injuries, and more attention from the ladies. Hey, they like glutes too.